That means it’s up against rivals such as the Cupra Ateca, the Volkswagen T-Roc R and the Audi SQ2  – all of which have less power than the Countryman JCW on paper. So, can the British machine take the upper hand?

JCW stands for John Cooper Works – a name that’s been associated with fast Minis for over half a century. In this case, the famous initials signify a 2.0-litre turbocharged petrol engine that produces 332lb ft of torque and a 0-62mph time of 5.1 seconds – that’s over two seconds quicker than the JCW’s less-powerful sibling, the Countryman Cooper S. That proves that it’s really here to earn its sporting stripes.

There’s also a host of trim and personalisation options that come as standard on the JCW, including Rebel Green paint, part-leather sports seats and a John Cooper Works body kit with spoiler and rear exhaust.

So does the JCW badge sit well on the largest and heaviest member of the Mini range? Read on to find out how it fares on the road, what it’s like inside and how much impact it’ll have on your wallet. If you like what you see, head to our New Car Buying pages to find a great deal with very little effort. 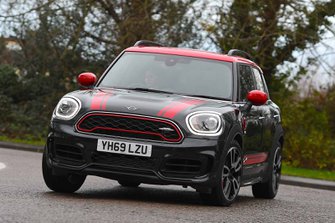 No other SUV offers as much performance for the money. Just be...