Called simply Porsche Taycan, this rear-wheel drive variant is the entry-point to the range. Is it any good, though?...

The Porsche Taycan represented a huge step in the evolution of this historic brand. While there have been electrified and even fully electric models in Porsche’s past, the Taycan marked the first time that it turned to volts and not dead dinosaur juice to power a truly exciting driver's car. To hammer home the point, the first Taycans offered were the insanely rapid Turbo versions, followed quickly by the slightly less violently fast 4S – our 2021 Performance Car of the Year. Only now has the entry point of the range been defined.

Called simply Taycan, this cheapest model does without the front electric motors of its more potent siblings, making it rear-wheel drive only. Power is, unsurprisingly, reduced, but you still get a minimum of 322bhp, rising to 402bhp when you trigger launch control. Go for the optional Performance Battery Plus and those figures change to 375bhp and 469bhp respectively. Overall, this means you get around 100bhp or so less than in the 4S.

There’s better news if you’re more interested in endurance than drag racing; with fewer motors to feed and therefore less of a drain on the battery, the regular Taycan has the best range in the, er, range. Compared to the 4S, which managed 254 miles with the standard battery and 288 miles with the optional bigger one in official tests, the rear-drive Taycan ups that to 268 miles and 301 miles respectively. Just bear in mind that the Tesla Model S can beat that comfortably. 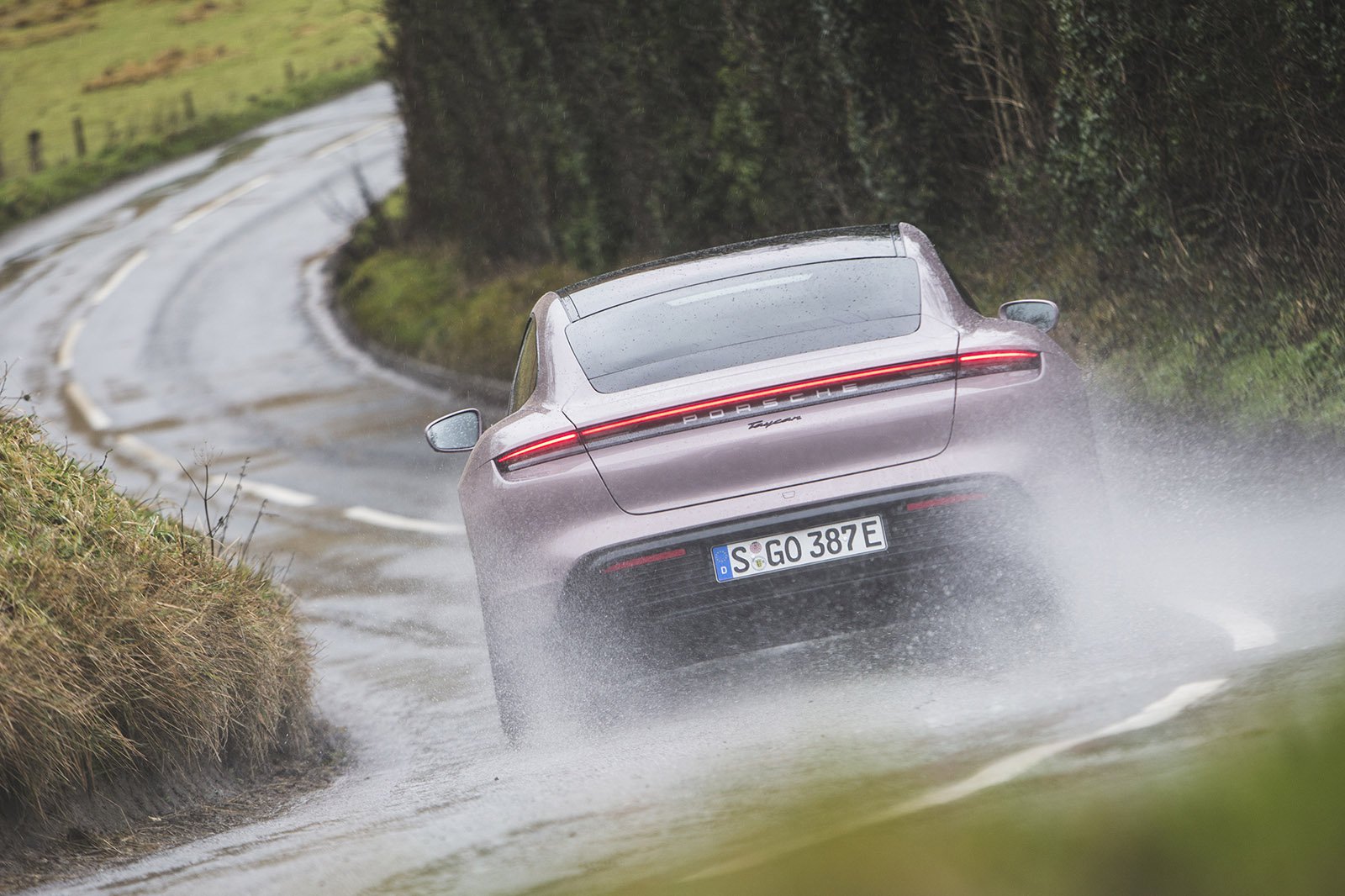 Theoretical numbers are all very well and good, but how do they translate to the real world? Well, on a cold winter’s day with the heater cranked up and the seat toasting our posterior, we would have run out of charge some way short of the official range, but in kinder conditions well over 200 miles will be easily achievable if you’re not determinedly exploring the Taycan’s performance credentials.

And of course, there was an element of the latter on our test day; it is a Porsche after all. If you’re expecting the same kind of neck-snapping acceleration that you’ll find in a Taycan 4S, let alone a Turbo, you’ll probably be a little disappointed. Even with the launch control engaged on our Performance Battery Plus-equipped Taycan, acceleration feels more akin to that of a Tesla Model 3 Standard Range – brisk but certainly not forceful.

On the other hand, even on a slippery, mud-strewn British B road there’s still plenty of traction, despite only the rear wheels being driven. Plus, if you want, you can slacken off the stability control and enjoy a little bit of playfulness and driver engagement that’s absent on the Tesla Model S. This really marks the Taycan out in the fun stakes. 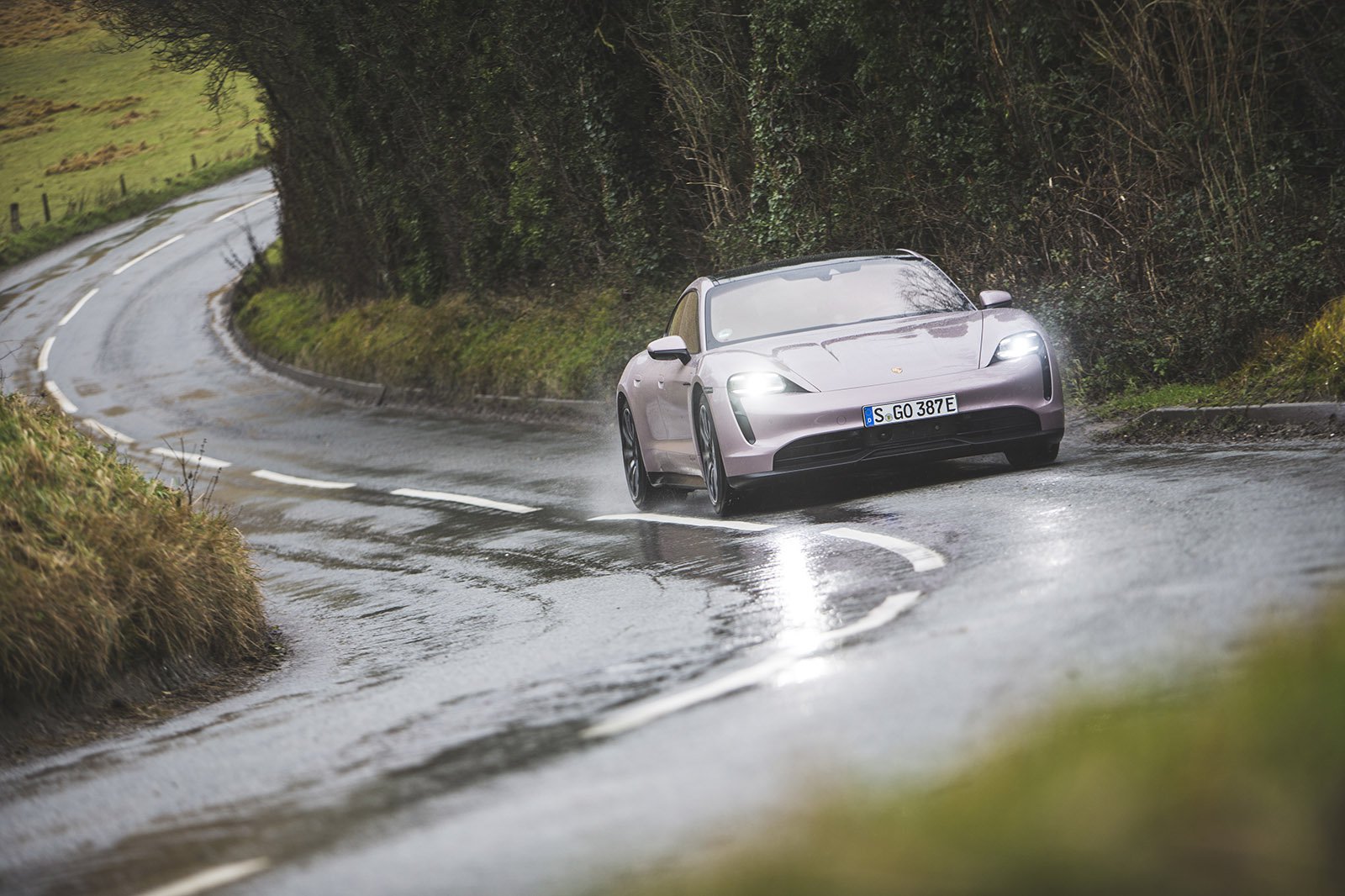 Now, this part of the review does come with a caveat: we’ve not yet tried the entry-level Taycan with the standard suspension setup of conventional steel springs and adaptive dampers. Our test car has the optional adaptive air suspension, which kept the car remarkably upright and endows it with an agility that’s deeply impressive for such a heavy car, and this despite it not being the cleverer system with active anti-roll bars to help reduce body lean that's offered in more expensive Taycans.

Helping matters is a steering system that’s precise, perfectly weighted at all speeds, and gives a far more direct connection to the road than the Model S’s. And unlike so many electric cars, with their inconsistent, hard to judge brake pedal feel, the Taycan’s are powerful, predictable and easy to modulate. As for comfort, a Model S is slightly softer, yet the Taycan’s tight grip on body movements and ability to round off bumps makes it a comfortable companion. 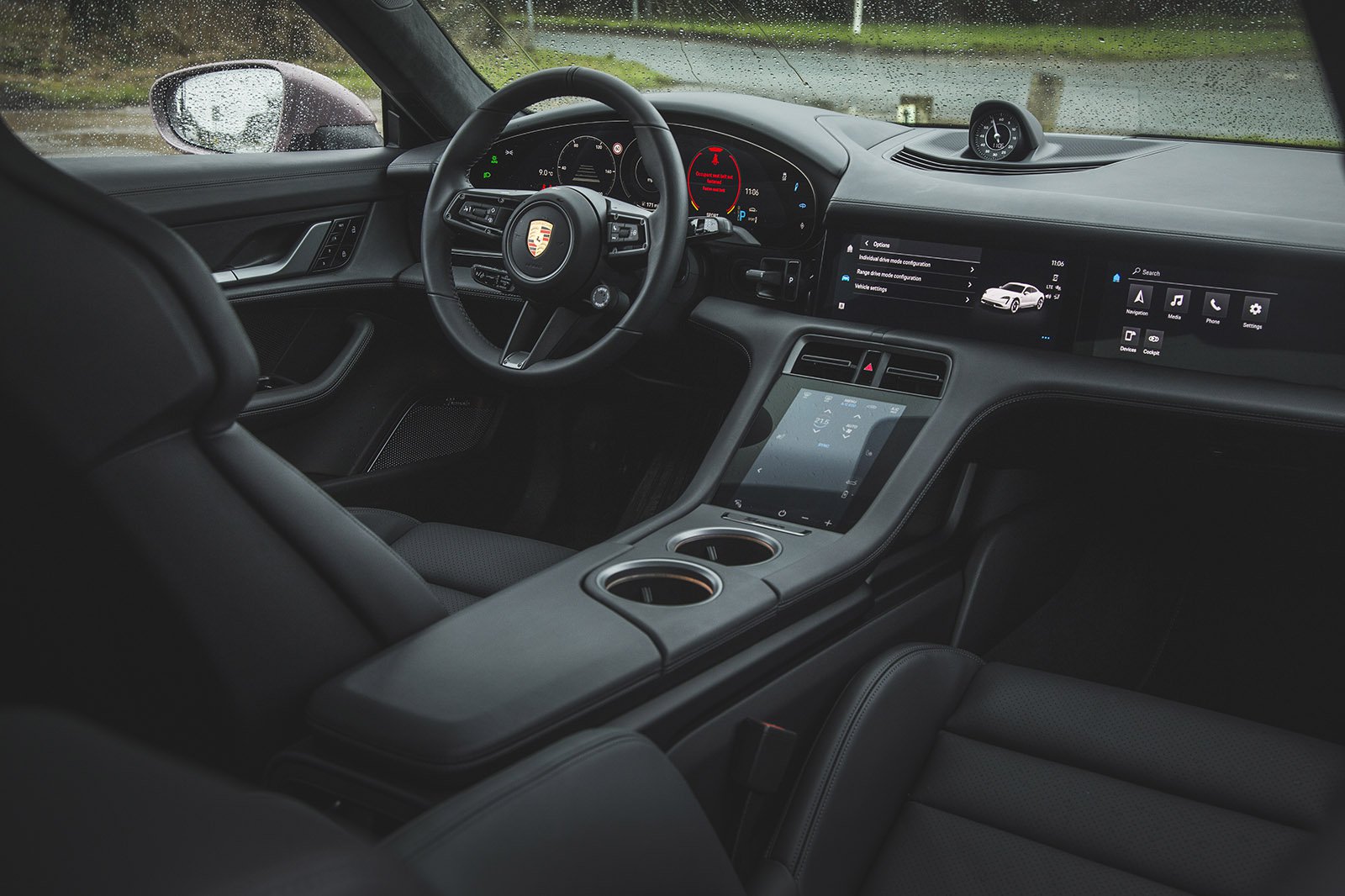 Inside you’ll find one of the best made interiors of any electric car, with plenty of high-quality materials, sharp displays, controls that work with a satisfying precision. Instead of a single giant touchscreen like you get in the Model S, the Taycan gets one for infotainment, and another below for pretty much everything else. However, while the screens look great and are responsive, they can be distracting to use on the move.

Four six-footers will fit in comfort, although you'll find more space in a Tesla Model S for both people and luggage. If you want to know more about the interior, take a look at our main Porsche Taycan review.