The Lexus RZ 450e is the brand’s first bespoke electric car, featuring cutting-edge tech, including a steering wheel straight out of science fiction...

While premium rivals have been rushing to produce electric vehicles (EVs) in recent years, Lexus has preferred to focus on its well-established hybrid technology. However, the Japanese brand insists it wasn’t late to the EV party; it was just waiting for the right time to make its big entrance. And the launch of the Lexus RZ 450e suggests it’s convinced that time has arrived.

True, the RZ 450e isn’t the first fully electric Lexus; that was the UX 300e. However, the 300e is based on the Lexus UX hybrid, whereas the RZ 450e is bespoke and will be offered exclusively as an electric car.

It’s about the same size as our reigning Plug-in Hybrid of the Year, the Lexus NX, so quite a bit bigger than the UX. But Lexus isn’t just relying on the RZ 450e’s extra space – or indeed its EV technology – to tempt buyers. No, there’s also other cutting-edge tech, which is shared with the closely related Toyota bZ4X.

Most notable is a steer-by-wire system, which will be offered as an option. Cars so equipped completely lack a mechanical connection between the steering wheel and front wheels, and instead rely on electrical signals. 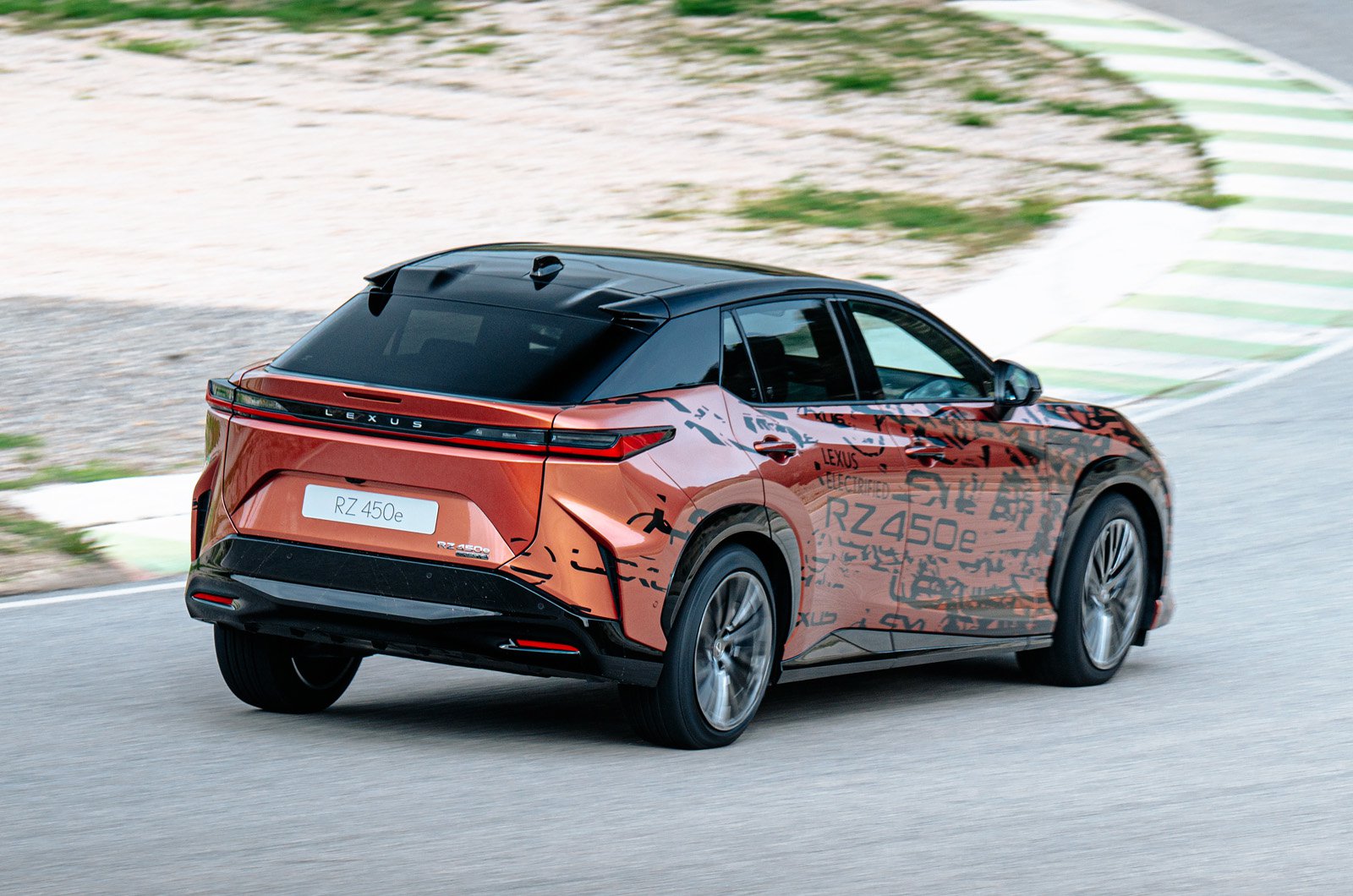 This has allowed the engineers to greatly reduce the steering ratio, with it taking just 300 degrees to turn the steering wheel from lock to lock at low speeds, which should in theory aid manoeuvrability. However, the steering also reacts more slowly at high speeds to enhance stability.

Now, we said steering wheel, but when it’s specified with the steer-by-wire system, the RZ 450e actually swaps the traditional wheel for a steering ‘yoke’. This controller is roughly rectangular and features no top section, to increase visibility of both the instruments and the road. But while it will no doubt excite fans of KITT from Knight Rider, it might also worry people who’ve followed the controversy of the yoke offered on the Tesla Model S and Tesla Model X in the USA.

Unlike Tesla, however, Lexus is only offering the yoke with the steer-by-wire system, and says that’s because it only works with that technology. This, it explains, is because the reduced steering ratio allows the driver to reach full lock in either direction without moving their hands from the ‘10-to-2’ driving position, meaning there is no need for a traditional wheel to allow for hand-over-hand turning.

For this first drive, we had the chance to sample a pair of RZ 450e prototypes on a race track and a short traffic cone handling course. One car featured a traditional wheel, and the other the new steer-by-wire system. 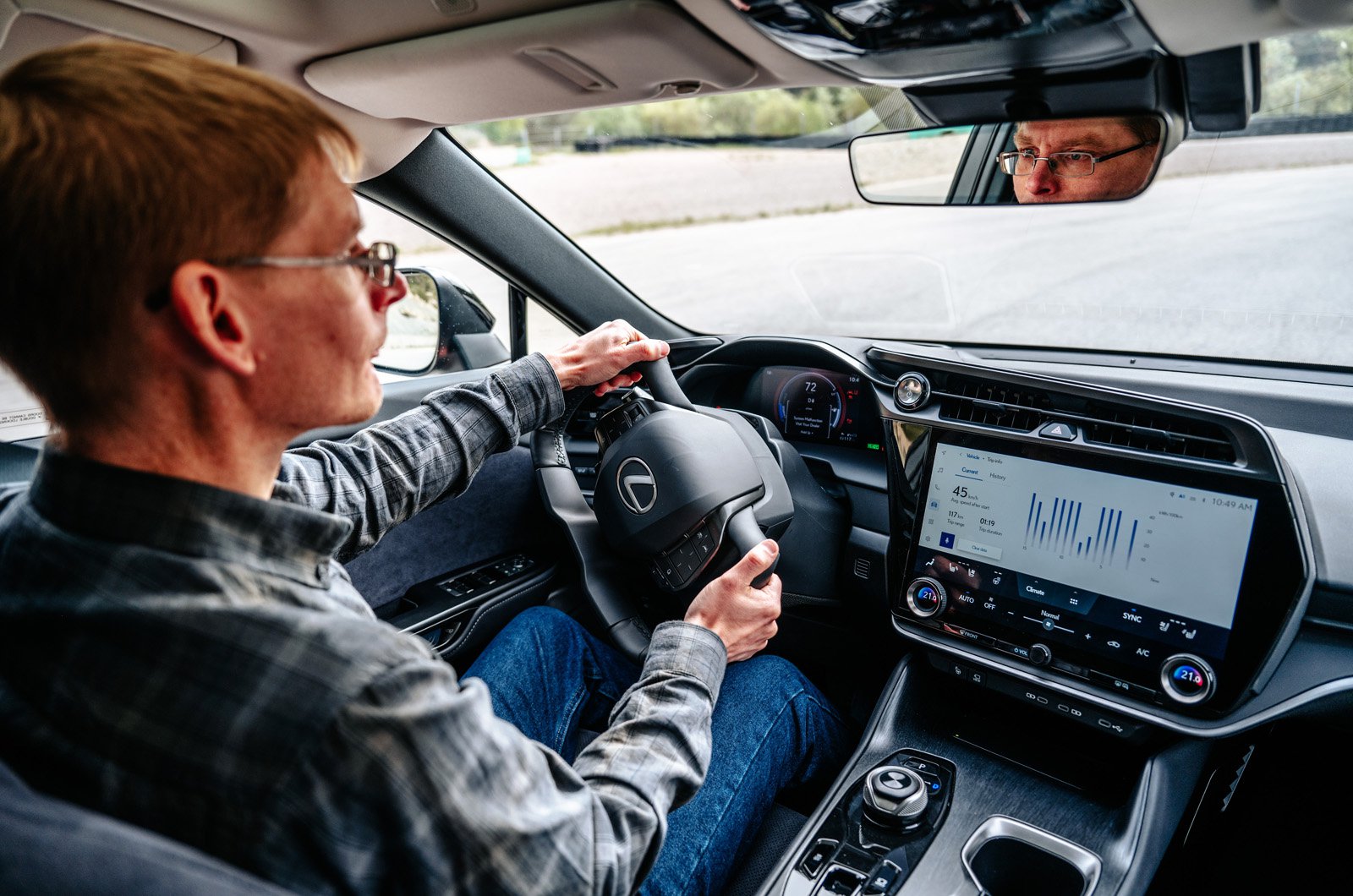 The Lexus RZ 450e has two electric motors (one on the front axle and another on the rear), which give it four-wheel drive and produce a combined 308bhp. That’s enough for 0-62mph in 5.6sec; by comparison, the Audi Q4 e-tron 50 quattro needs 6.2sec, but the Tesla Model Y Long Range can hit 62mph in only 4.8sec.

It also means the RZ 450e is significantly more powerful than the range-topping bZ4X, which has just 214bhp. And, sure enough, the RZ 450e feels properly brisk, even though Lexus has clearly focused on delivering smooth acceleration rather than the neck-snapping performance of the Model Y.

Production models will have several driving modes, including a special ‘Range’ setting that will run the RZ 450e purely off the rear motor to improve efficiency and consequently how far it can go on a charge. Expect an official range of more than 250 miles.

Given that our drive was on a smooth race track, it’s currently hard to draw too many firm conclusions about the ride and handling of the RZ 450e. But, certainly, the suspension balances the weight of the car well in the corners. And while the front wheels slide a bit in tighter turns, that’s hardly unusual for a heavy, battery-electric vehicle. 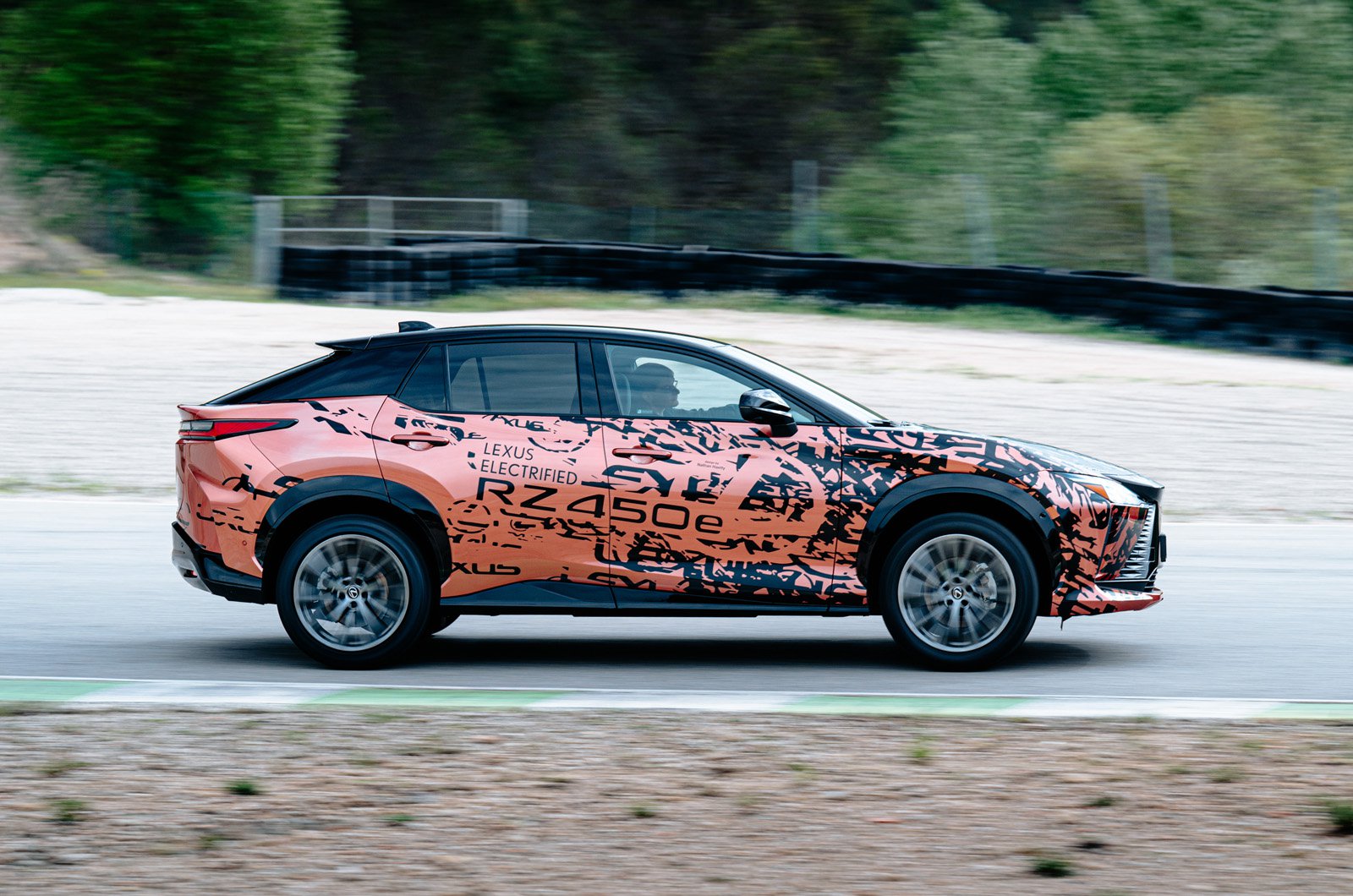 The four-wheel drive system in the RZ 450e automatically adjusts the power distribution between the front and rear wheels as required, which helps to enhance traction. That said, the focus of the engineers appears to have been more on delivering composure and comfort than excitement.

To the big question then: what’s that steer-by-wire system like? Well, it has real potential, but it’s likely to be an acquired taste due to the period of adjustment required from the driver.

At higher speeds, there’s a natural weighting to the yoke that actually inspires more confidence than the traditional steering setup that you can get in the RZ 450e. There’s even reasonable feedback, even though it’s entirely artificially generated.

On the other hand, in slower bends you initially find yourself turning in more sharply than needed. But you soon learn to temper your efforts, and over time that would likely be rewarded. 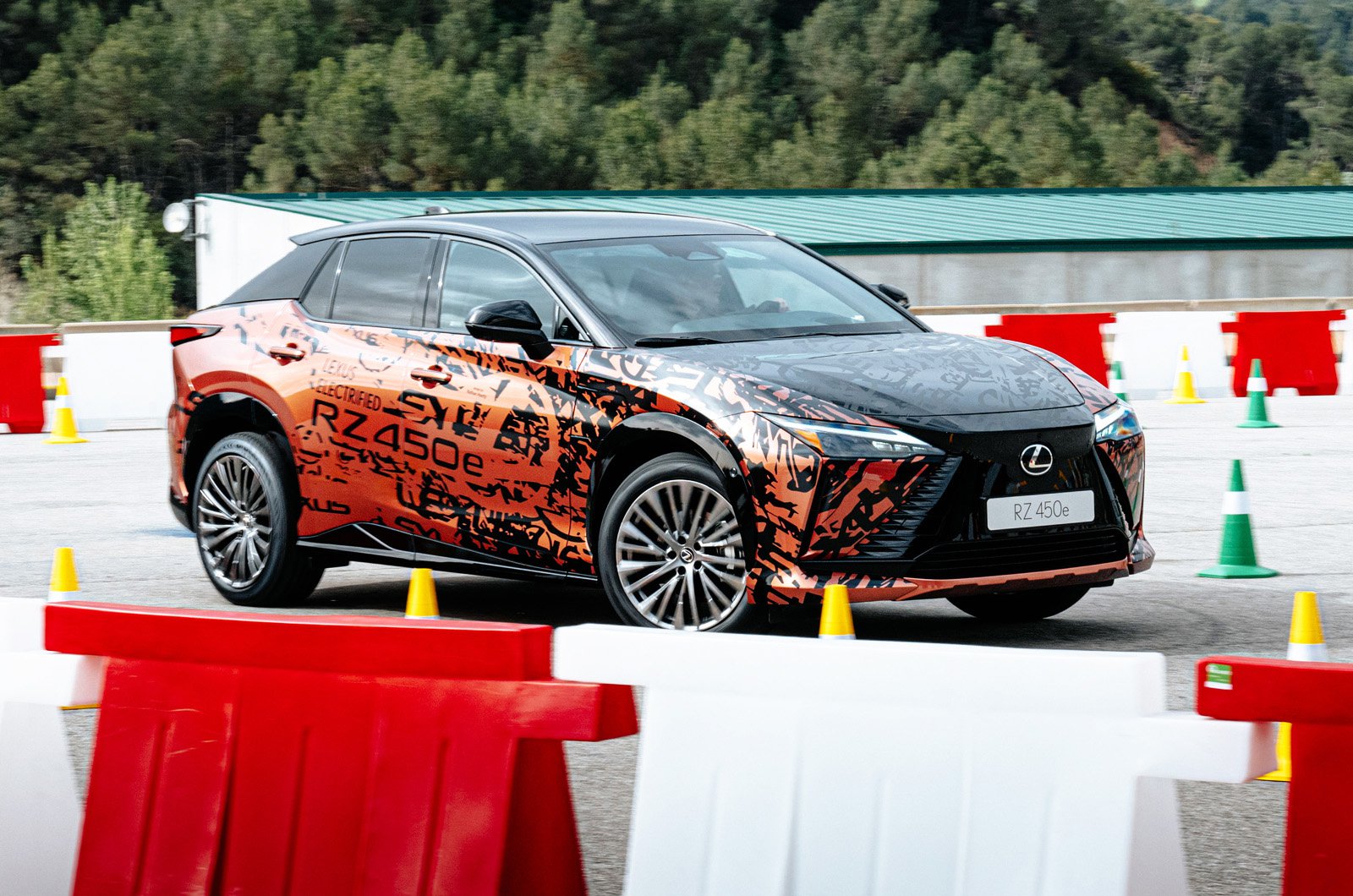 As for the tight handling course, here turns that would require a lot of wheel twirling in the conventional car were a breeze in the steer-by-wire version. Perhaps too easy: we clipped a few cones on the inside of sharp corners.

The system also has some foibles. Turn too fast at lower speeds and it can unsettle the ride. Plus, there’s an occasional – and brief – feeling of lag when you turn the yoke in a hurry, which you don’t get with the standard mechanical system.

A brief outing on a low-grip skid pan course showed the fly-by-wire setup does allow good control of the car, although the steering can become very heavy when you have to rapidly apply opposite lock.

That said, even after a few short laps we found the yoke easy to adjust to, and we suspect with a little more time the strengths would shine through even further. The system definitely feels well suited to the RZ 450e, given the relaxed nature of the car; Lexus engineers were also keen to highlight that it’s still being tuned, with further adjustments likely before it starts to be offered. 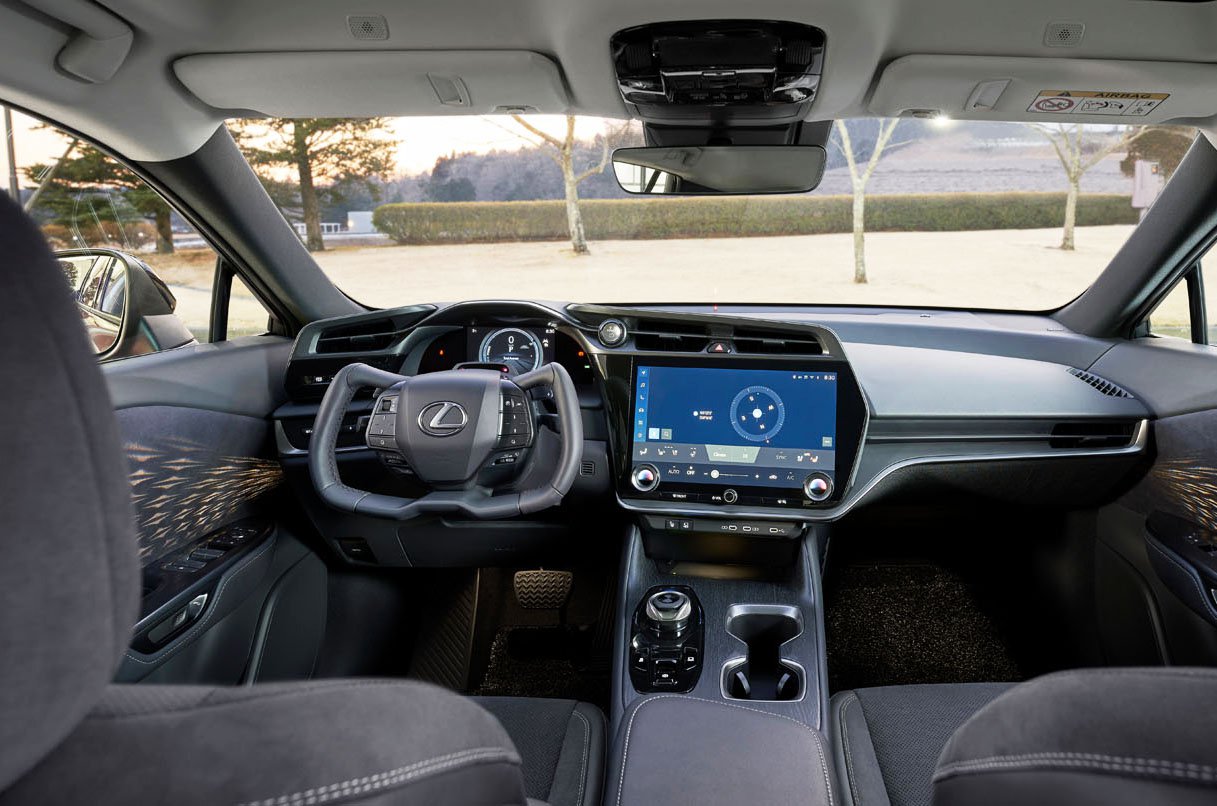 The interior of the Lexus RZ 450e has the premium feel that you’d expect. Meanwhile, the digital instrument display is clear and well laid-out – and definitely works better with the low-topped yoke than the regular steering wheel.

Our test cars also featured an impressive looking 14in touchscreen. And while we didn’t have the opportunity to test many of the functions, the infotainment felt a step forward from recent Lexus models in terms of the quality of the graphics. The infotainment allows over-the-air software updates, and features Apple CarPlay and Android Auto smartphone connectivity.

You sit lower than you do in the NX, but the interior is more spacious, thanks to the RZ 450e being 160mm longer between the axles. This sense of roominess is heightened by an optional panoramic glass roof, which is dimmable and has a coating to reduce the heat it lets into the car.

Other kit includes new radiant heaters located at knee level in the front, a driver attention monitor attached to the steering wheel or yoke, and blind spot monitors in the doors, which prevents them from being opened if a vehicle or cyclist is approaching. 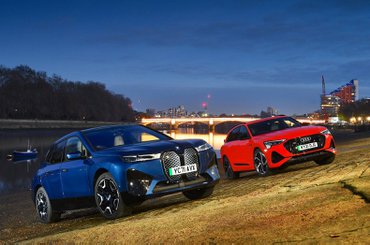 BMW has finally joined the luxury electric SUV party with the radical iX. To be counted as a success, it must beat the likes of the Audi E-tron