* 4x4 drivers less likely to be in accident * Better view of road thought to be the reason * Chance of injury is greater in an accident, though... 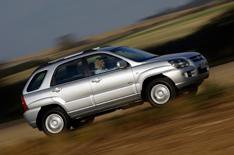 New research shows drivers of 4x4s are less likely to be involved in crashes, but when they are, injuries are more serious.

The survey was conducted by the Transport Research Laboratory (TRL) on behalf of Transport for London (TfL).

It found that the collision rate for 4x4s was 30% lower than that for other cars. This is believed to be because 4x4 drivers are higher up and have a better view of traffic, allowing them to react to incidents quicker.

However, a TfL spokesman said the study highlighted that pedestrians, in particular children, motorcyclists and occupants of small cars, were significantly more likely to be killed or seriously injured when in a crash with a large 4x4.

The report found that, for those hit by a large 4x4, there was a 26% chance of injuries, compared with a 22% chance when hit by a smaller off-roader. When hit by a famil sized car, the rate of injury was 21%.