More for you |
Top 10 used SUVs for less than £10,000Used test: BMW 1 Series vs Mercedes A-ClassNew Dacia Bigster large SUV – what we know so farNew issue of What Car? magazine on sale nowThe most popular used car reviews of 2020
Home
News
Best and worst MPVs 2016
news

* What Car?s top five MPVs * and our least favourite * Find out which ones to go for... 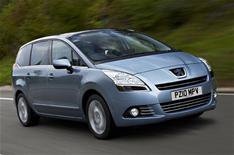 The best of the best
Peugeot 5008
Peugeot is enjoying a real product renaissance in 2010 with its 00 agents the 3008 won our Car of the Year award and the 5008 seven-seater swept to the top of our MPV wish list.

The 5008 is based on the Citroen Grand C4 Picasso, so it gets the same brilliant rear seats that are fantastically easy to fold up or down with just one hand (while you struggle with the little one and three bags of shopping with the other).

That's the cornerstone of a good MPV, of course, along with bags of space, but the 5008 is also very comfortable with a good ride and excellent refinement.

It's much better to drive than the Citroen, too, which is why it leapfrogs the competition into the number-one spot. The plentiful grip might take you by surprise, while the steering is meaty and reassuring.

The range is well equipped, even if alloy wheels are missing from the cheapest models. In fact, the worst thing we can say about the 5008 is that some of the controls and menus are a little fiddly and difficult to navigate.

Besides that, the Peugeot 5008 offers an awful lot for your money including practicality, comfort, an enjoyable drive and reasonable running costs.
What Car? pick of the Peugeot 5008 range - 1.6 HDi 110 Active

The best of the rest
Citroen C3 Picasso
If you don't need seven seats, we reckon the C3 Picasso could well be your cup of tea.

You won't need a driveway the size of an airfield to park the Ce Picasso - it's pretty compact - but Citroen has done a great job of maximising the amount of space inside. You'll find plenty of room for five and their luggage.

Ride and refinement are very good, but you'll need to choose your model carefully. Entry-level models aren't worth having they have only two airbags and list prices are quite high on better-equipped cars such as our pick, the VTR+. Haggle for a decent discount, though, and the C3 Picasso is a great buy.

Ford S-Max
The Peugeot 5008 is good to drive, but the Ford S-Max sets the handling benchmark in the MPV market.

It's a big car, with masses of space inside, but you can really fling the S-Max around (if your passengers don't mind). The steering is responsive, well weighted and confidence inspiring, while the car will cling on like a limpet through corners.

The seats aren't quite as easy to use as in a Peugeot 5008 or Citroen Grand C4 Picasso, but as long as you've got a pair of hands free it will still take less than a minute to convert from seven-seater to an enormous, comfortable van with lots of equipment.
What Car? pick of the Ford S-Max range - 2.0 TDCi 140 Zetec

Citroen Grand C4 Picasso
Yes, the Grand C4 Picasso isn't up to the standards of the Ford or Peugeot to drive, but it's still good enough for Citroen to get a second MPV in the top five.

The easy-to-fold seats are the standout feature and are as clever as a troop of Big Top tumblers. Once you've had a play with them, you'll wonder why all MPVs aren't built this way.

It's cracking value, too, offering lots of space, safety equipment and creature comforts for your cash. Our preferred 1.6-litre diesel is a great engine, while VTR+ gets our money for the added equipment.
What Car? pick of the Citroen Grand C4 Picasso range - 1.6 HDi VTR+

It's not without good reason, as this is another great family car that's decent to drive and has loads of space to play with.

Prices are tempting, equipment levels are good and the cabin is nicely designed and feels well built.

The Achilles heel of the Renault, however, is the second row of seats they don't fold into the floor like the ones in our other favourite seven-seaters. You have to lug them out if you need more space.
What Car? pick of the Renault Grand Scenic range - 1.9 dCi 130 Expression

There are very few eight-seater MPVs on the market, so if you really need to transport half a troop of scouts the Hyundai i800 might be your answer. It's more local authority minibus than MPV inside, however, while the ride is bouncy. Two airbags just isn't enough, either.

The Volkswagen Caddy Maxi Life is based on a van, and it really shows. There's space for seven, but the seats don't fold away you'll need arms like Popeye's to take them out. Yes, it's robust, but it's also too expensive and it doesn't have much kit.

It might look like another eight-seater, but the massive Mercedes-Benz Viano is actually a six-seater as standard. You can opt for a three-seater bench in the back, but the Merc's is too expensive and not versatile enough.

The Ssangyong Rodius is an awful lot of not very good-looking metal for the money. There's loads of equipment and space, too, but resale values are the stuff of nightmares.

Hyundai has some great products at the moment, but the Matrix isn't one of them. It's well priced and decently equipped, but the cabin isn't a nice place to spend time and the resale values are poor.