* Fiat 500 family will add an SUV model * Will rival Nissan Juke and Mini Countryman * Not expected on sale until at least late 2013... 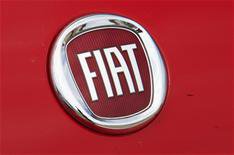 Fiat will expand its growing family of Fiat 500 models with a crossover, the company has confirmed.

During a presentation at the launch of the 500L, they gave a fleeting preview of a forthcoming crossover model, which they said would target the likes of the Mini Countryman and Nissan Juke.

As yet, there are few details available about the new model, but our brief glimpse was enough to show that the new SUV shared much of its styling with the 500L, including the distinctive front end. It also partly confirmed what was suggested in April, that extra body cladding and a raised ride height would give a more rough-and-ready look, although the crossover would not have four-wheel drive.

The company added that, while the 500L was more family focused and would appeal more to women, the crossover was expected to have more appeal for men.

There is no word on when this crossover might go on sale, but because the 500L is not due to reach the UK in April 2013, we don't expect to see the SUV for at least 18 months.

In the meantime, we are driving the 500L today, so click back on whatcar.com later this evening to see how we rate the company's new mini-MPV.