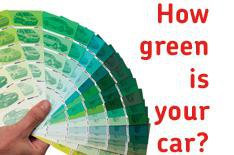 Honda and Toyota have the best reputation as green car makers, according to a new survey.

Both scored almost three times as many positive mentions as their closest rivals, Lexus and Ford.

The poll of 2665 people by the Newspaper Marketing Agency (NMA) also found that two in three would happily change their car to reduce their emissions, while 51% were prepared to pay more for low-emission technology.

More than four out of five (83%) agreed that fuel economy was more important than high performance.

However, many remain confused by the jargon of greener living. More than a quarter of respondents had only a vague, or no, idea of what a carbon footprint was.

Around 20% did not understand the term 'greenhouse gases', and a similar number were confused by 'fuel efficiency' and 'CO2 emissions'.