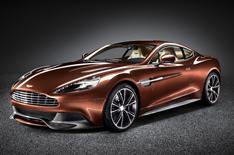 The all-new Aston Martin Vanquish is available to order now, at 189,995.

The 2012 Vanquish replaces the current Aston Martin DBS and resurrects the name that was used for Aston Martin's range-topping model between 2002 and 2007.

At its heart, the Vanquish has an updated version of Aston Martin's 6.0-litre V12 petrol engine, which develops 565bhp and 457lb ft of torque. Power is sent to the rear wheels, though a six-speed automatic gearbox.

Aston Martin quotes a 0-62mph time of 4.1 seconds and a top speed of 183mph. Fuel economy and CO2 emissions figures are yet to be released.

The Vanquish's body is based around an aluminium tub and, for the first time in any Aston Martin, every exterior panel is made from carbonfibre. Aston Martin says the body is 25% stiffer overall than the DBS's.

The exterior design is a logical progression from Aston Martin's current models, but also shows the influence of the limited-edition One-77 supercar. Exposed carbonfibre is used for the front splitter, side sills and rear diffuser. Aston Martin says that features such as the elongated side strakes and integral rear spoiler are possible only because of their carbonfibre construction.

Inside, there's a choice of leather and Alcantara trims. The instrument panel and centre console are derived from the One-77's, and there's an all-new infotainment system.

Cabin design shows the influence of One-77 supercar

Thanks to larger cubbies and improved packaging, Aston Martin claims a 140% improvement in cabin storage space over the DBS. There's also more leg- and headroom, it says, and a 368-litre boot that's 60% larger than the DBS's. The Vanquish will be available with a two-seat layout, or in 2+2 form, with two small rear seats.

At 189,995, the Vanquish will be a rival for cars such as the Ferrari FF and Mercedes-Benz SLS AMG Coupe. First deliveries of the new model are expected in late 2012, while a drop-top Volante model is likely to follow in 2013.