Recently confirmed as the best hot hatch in town, so it’s going to be a tough car to beat.

Hyundai’s first hot hatch is down on power but could still win if it’s more fun to drive.

‘N’. Right now, it stands for nothing. You see, the ‘N’ in i30N denotes Hyundai’s new sporting sub-brand, which has no heritage. But by entering the motorsport arena, Hyundai is attempting to create some, while fizzing up its arguably staid image in the process. It has even hired a talented engineer – a chap called Albert Biermann, who spent years creating fabulous cars for BMW’s M division – to sprinkle some fairy dust onto its inaugural N-badged hot hatchback.

The i30N has to beat the most effervescent hot hatch of all: the 316bhp Honda Civic Type R. That car squeaked ahead of the 345bhp Ford Focus RS in a recent group test, proving that pure power alone isn’t everything. Which is why this top-spec i30N Performance, despite having ‘just’ 271bhp from its turbocharged 2.0-litre engine, has every chance of prevailing if it ends up being a blast to drive. More than anything else, it’s about the fun factor. 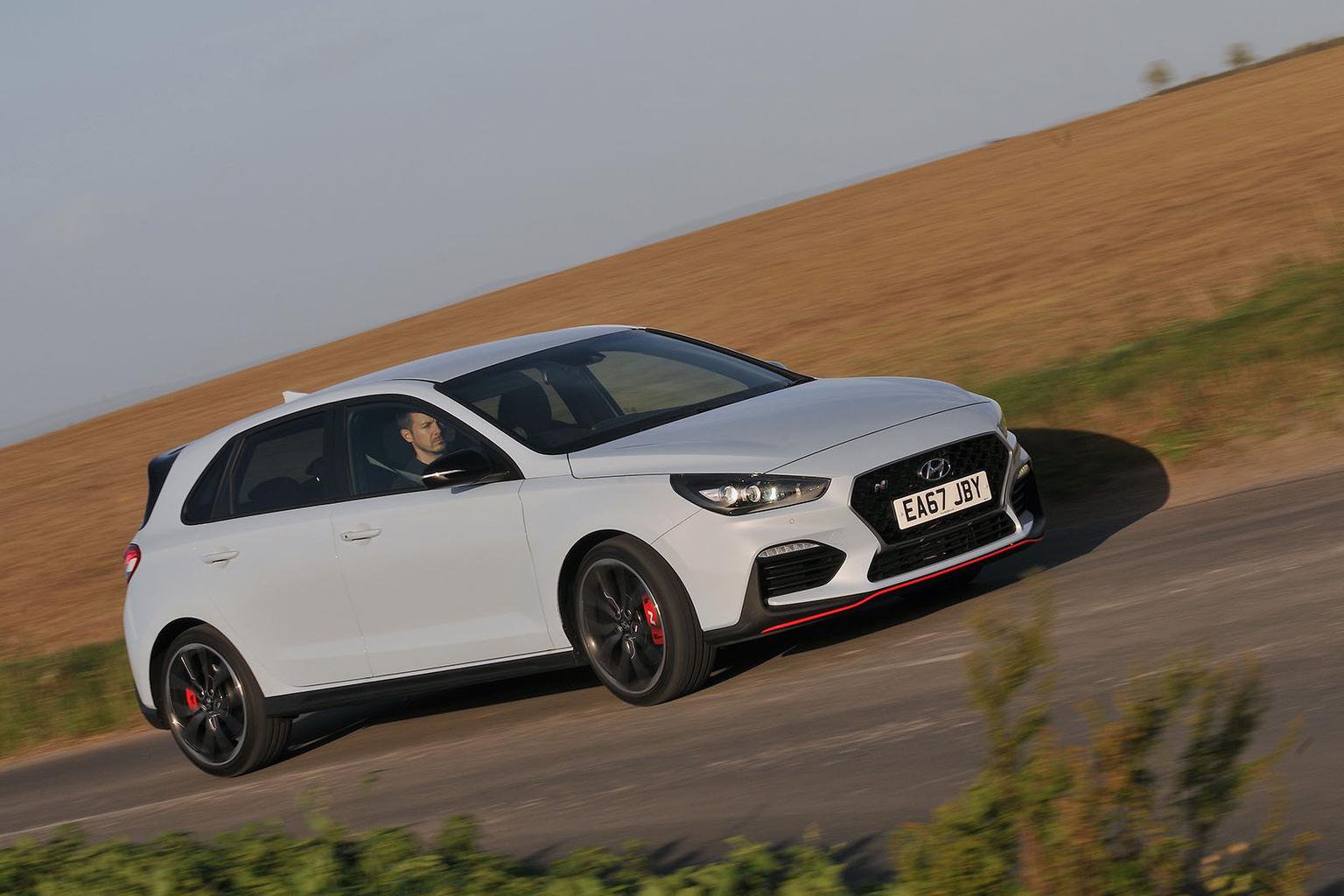 Pure pace may not be the be-all and end-all here, but performance is still a big factor. And it comes as no surprise to find that the lighter, punchier Civic has the upper hand.

The i30N doesn’t leave you feeling short-changed; it has pin-sharp accelerator response and enough guts to dip under six seconds in the 0-60mph sprint. That’s not bad at all, especially when you factor in the standard sports exhaust’s peal of fruity pops and warbles.

The Civic is even quicker, though. True, initial accelerator response is lazier and it struggles to put its power down off the line without a flurry of wheelspin, but it pulls energetically from around 2000rpm and absolutely flies beyond 4000rpm. Flat out or accelerating in the gears, the Civic is more often than not the trailblazer – albeit without much aural fanfare. Lacking the i30N’s engineered tailpipe theatrics, the Civic sounds simply purposeful.

Mind you, the Civic’s clutch and gearbox have been engineered to perfection. The stubby gearlever operates with joyous precision and it’s easy to judge the clutch’s defined biting point. By normal standards, the i30N’s controls feel good, but they lack that same exactness. On a circuit, the Civic’s brakes retain their confident feel, while the i30N’s are harder to modulate. Both are solid and progressive on the road, though.

The i30N is an easy and enjoyable car to thread quickly along an undulating B-road, displaying fine composure and stability – as long as its standard adaptive dampers are in Comfort mode. Its ride is reasonably compliant in that mode, too, but the sportier settings are too firm for bumpy UK roads, making the car feel jiggly and uncomfortable.

The Civic’s adaptive set-up offers more options. Not only is it more compliant and comfortable generally, but the Civic’s poise is on another level when you switch to Sport or +R mode. Our only quibble is that the steering is too heavy beyond the Comfort setting, but that doesn’t detract from its fluency, or your confidence as you fling the car into corners. 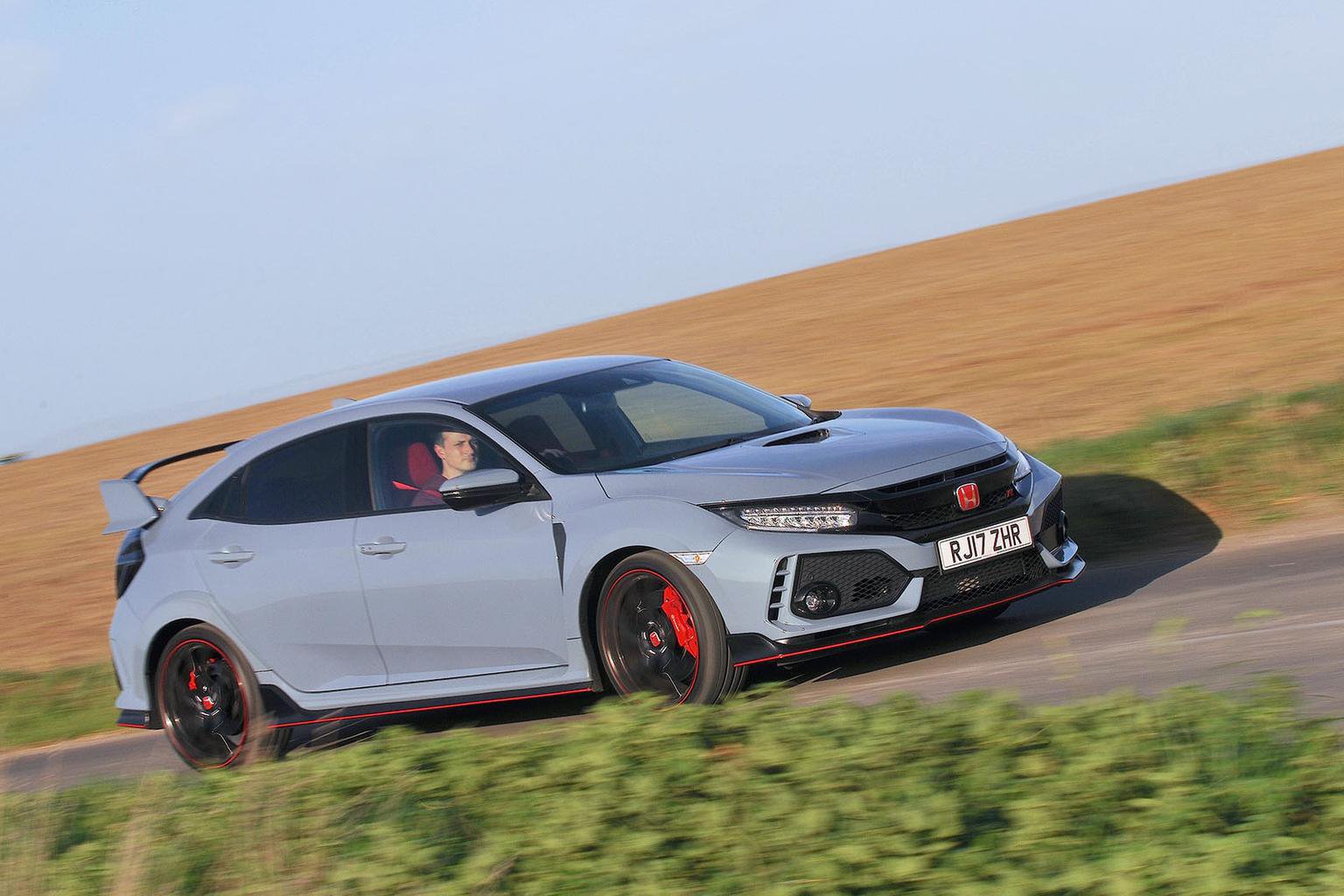 The i30N’s steering is perhaps its weakest link. It’s gratifying that you can alter its weighting independently of other settings such as accelerator response and suspension stiffness (you can’t in the Civic), but the way it builds weight, combined with the speed of the steering just off the straight ahead, creates enough inconsistency that you trust it less.

Both cars’ front wheels are driven through limited-slip differentials, helping them to claw out of corners with less scrabble. Each does an impressive job, although the i30N still tugs the steering wheel more habitually as alternate front wheels struggle to muster grip. The Civic is more stable when accelerating hard out of corners and has phenomenal grip, as demonstrated by the fact that it lapped our test track 1.1sec quicker than the i30N and recorded a higher lateral g figure.

Motorway cruising isn’t a hardship in either car, although refinement is better in the i30N; the Civic generates noticeably more wind and road noise.