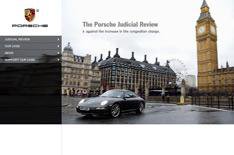 Porsche has officially applied for a judicial review to challenge the new congestion charge for high-emission vehicles in London.

The manufacturer believes that the increase - from 8 a day to 25 - is unfair. Managing Director of Porsche Cars GB, Andy Goss, said: 'Not only is the new tax on motorists unfair, it is also a disproportionate and illegal use of power by the Mayor.'

Porsche has also asked the court to assist the proceedings' progress, because the new charges will come into effect in late October.

Porsche says that the Mayor has failed to address any of the issues in its claim adequately.