VW seven-seat SUV on the way

* VW seven-seat SUV planned * For American and Chinese markets * Unlikely to be sold in UK... 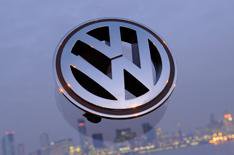 VW is plotting a seven-seat SUV to rival the likes of the Hyundai Santa Fe and Toyota RAV4, but its likely to be exclusively for the US market and possibly China, senior sources have revealed to What Car?.

'An SUV is an addition to the portfolio that we would like to see,' Volkswagen's US, boss Jonathan Browning, announced on the eve of the Detroit motor show, but he would not be drawn on any details.

Other sources have admitted that plans to produce such an SUV are well advanced, because they are crucial to the companys plans for huge expansion in America. The current offerings are the European-built Tiguan, which is seen as too small for America, and the Touareg, which is too expensive for large sales success.

Insiders have admitted that a US-spec SUV is likely to be available in both five- and seven-seat variants, possibly with two different wheelbases. It's likely to be made at VW's new Chatanooga factory in Tennessee, where the US-only Passat is built and could share many components. A version could also be made in China for the Chinese market.

However just like the US Passat, it's unlikely that the new VW SUV would ever go on sale in Europe.