The interior has a futuristic feel, without being so revolutionary that it’ll scare off anyone with an acute fear of change. It's a spartan affair; there’s a digital pod behind the steering wheel with a small 5.3in display that provides clear readouts of speed and range, and a rotary-style gear selector on the side, just like the BMW i3's.

In terms of layout – the relationship of the driver’s seat to the steering wheel and pedals – it’s very good, leaving you sitting relaxed at the wheel. Height and reach adjustment for the wheel is standard, but not even high-spec 1st Edition models get electric seats or adjustable lumbar support. We didn’t have any back issues after a couple of hours in the saddle, though; in fact, our only complaint with the seats is that they don’t have a great deal of side support during brisk cornering.

We will grumble at the lack of 'real' buttons, though. All the controls are touch-sensitive, including the temperature controls, which are touch-sensitive sliders. Everything else is operated from the central infotainment touchscreen, which you can read more about below. We can't help but wonder why it has to be made so distracting to change anything on the move. Proper, physical buttons and knobs, as found in a multitude of rivals, including the Kia e-Niro, Nissan Leaf and Renault Zoe, are so much easier to use.

Seeing out the front of the ID.3 is pretty easy, with its deep windscreen and slim front pillars affording you a largely unobstructed view of the road ahead. The rear pillars are thicker and the rear screen a little shallow, but parking sensors (front and rear) and a rear-view camera are standard on 1st Edition models.

Bright LED headlights will be standard throughout the range, and 1st Editions come with adaptive Matrix units that can be kept on main beam without blinding oncoming drivers.

All ID.3s come with a 10.0in infotainment touchscreen, which is a similar size to many of its rivals, but quite a bit smaller than the Tesla Model 3’s 15.0in display.

Sadly, Volkswagen's latest infotainment software is nothing like as slick as the Model 3’s. It's trying to be, with fancy pictures of the car that twirl seductively as you change screens, but it's style over substance, proving laggy and confusingly laid out. It’s not only beaten by the Tesla, because the Kia e-Niro’s system is far more straightforward to operate, while the BMW i3’s physical iDrive controller is an example in how to make a complex system dead easy to operate on the go – rather than having you stab away hopefully at pixels on a touchscreen.

We don’t have full UK trim specifications yet, but 1st Editon cars will get a natural-speech voice control to call out commands to; it’s hit and miss whether it’ll do what you ask, though, especially if you have noisy kids in the car. Sat-nav is also standard on 1st Editions, but Apple CarPlay and Android Auto smartphone mirroring won’t be available initially; they’ll be added to all existing cars with an over-the-air software update and become standard on new orders after that. 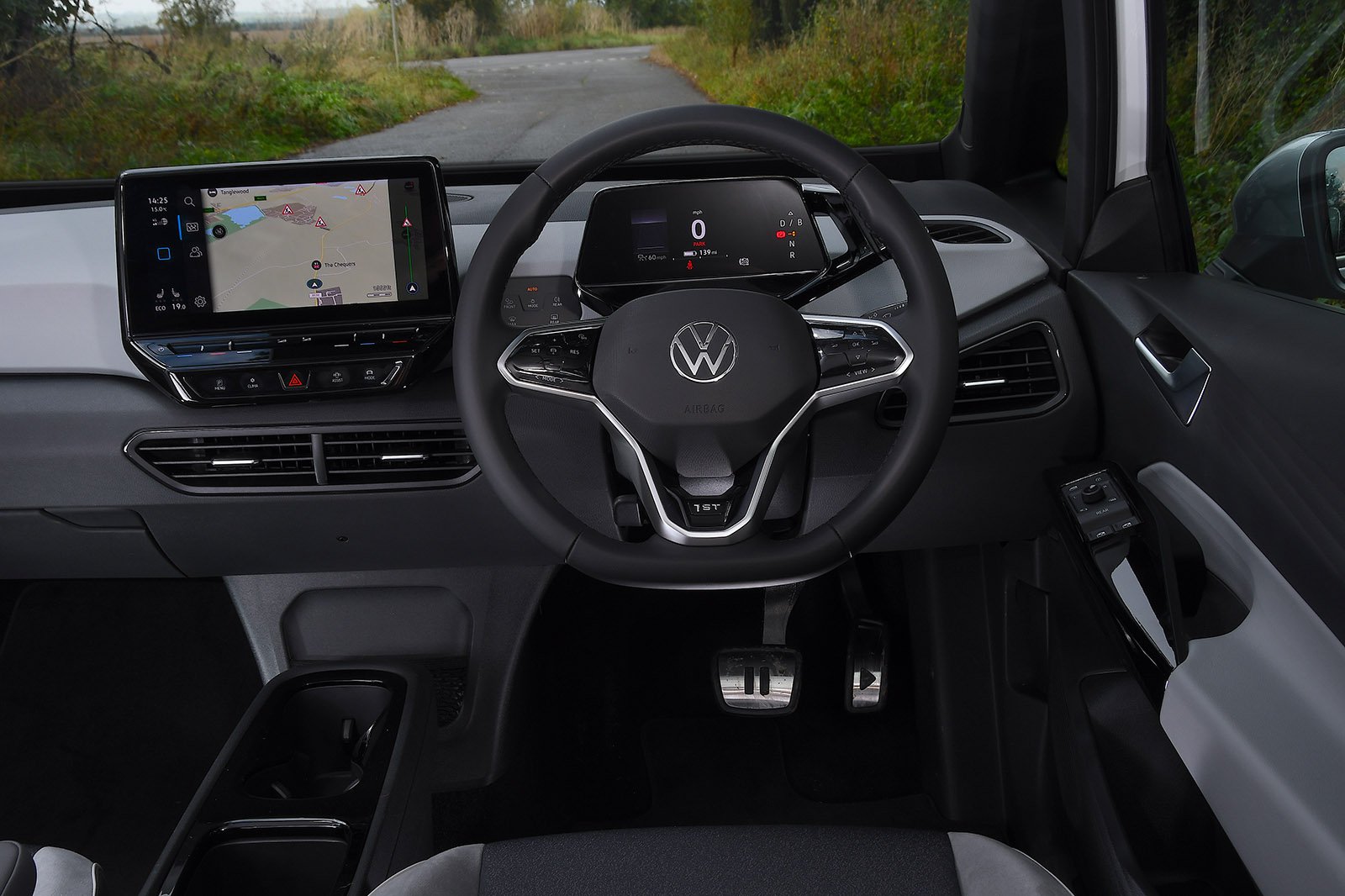 Quality was once a Volkswagen byword, but right now it seems to have taken a backseat in the company’s priorities. The ID.3 feels well screwed together, but the plush-feeling plastic strip across its dashboard is the only nod to hedonism, presumably in the hope that you won’t notice the myriad of cheaper, harder plastics, used everywhere else.

At the less expensive end of the range, you might not feel that cheated – the ID.3's still a light-year ahead of the Nissan Leaf on quality – but with the top-end models costing the same as a premium-brand executive car, that leaves it below par. Now, the Tesla Model 3 isn't exactly great in terms of material or build quality, but it is better. If you own a BMW i3 the ID.3 will feel like a noticeable step down.