The E-tron looks pricey compared with the Jaguar I-Pace, let alone non-prestige electric SUVs such as the Kia e-Niro and Hyundai Kona Electric – both of which can take you farther on a fully-charged battery.

It is cheaper than the Tesla Model X, though, and it has some of the strongest predicted resale values of any car on sale.

It’s the running costs that have the potential to really save you money, of course. The E-tron will be cheap to charge from the mains, especially if you’re on an Economy 7 night electricity tariff. And, although you’ll have to pay the £310 luxury car tax annually, you won’t pay road tax or the London congestion charge, and company car drivers will incur only a 13% benefit-in-kind tax rate.

The list of standard equipment includes heated front seats, leather upholstery, two-zone climate control and an electric tailgate, plus there are charging points on both sides of the car so you never have to drag cables over the top of it. However, given the E-tron’s high price, it’s a little disappointing that adaptive cruise control costs extra unless you upgrade to the even pricier Launch Edition model.

Going for the Launch Edition also gets you upgraded leather, privacy glass, a black exterior styling pack, the virtual door mirrors and Matrix LED headlights which are so powerful that they make night look like day.

It’s difficult to know how reliable the E-tron will be, given that it has bespoke mechanicals and is too new to have featured in the 2018 What Car? Reliability Survey. However, Audi as a brand finished 20th out of 31; ahead of Tesla, Jaguar and Mercedes, but behind BMW and Lexus.

Like conventionally powered Audis, the E-tron comes with a three-year, 60,000-mile warranty, while its battery is covered for eight years or 100,000 miles – whichever comes first. This is in line with Jaguar, but Tesla doesn’t impose any mileage limit on the battery.

All versions of the e-tron come with automatic emergency braking and a lane departure warning system. To that, First Edition trim adds traffic sign recognition, lane-changing assistance and systems that can stop you pulling into oncoming traffic and put the driver’s seat at the optimum position to minimise whiplash if the car recognises you’re about to be rear ended.

Independent testing by EuroNCAP reveals the e-tron to be one of the safer premium electric cars. It just pips the Jaguar I-Pace's adult and child occupancy protection scores, although it doesn't score as well as the Jaguar for pedestrian protection. It's no surprise, then, that it gets the full five-star NCAP rating overall. 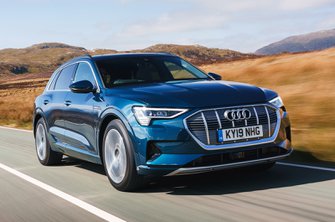 The Kia e-Niro pulls off a trick that many electric...

As good as electric cars get – especially in Perform...