Put simply, the M2 Competition is the kind of car that has you looking for excuses to go for a drive. Its 3.0-litre straight-six engine may not be set up quite as potently as it is in the pricier BMW M4, but acceleration is still seriously impressive. It takes just 4.2 seconds to sprint from 0-60mph when equipped with the optional seven-speed dual-clutch gearbox; in our tests, 0-100mph took a blistering 9.9sec.

The M2 Competition is about more than just straight-line speed, though. If you cycle through its Comfort and Sport modes and up into Sport+, the traction and stability control systems will allow more wheelslip before kicking in. If you have access to an empty test track you can even turn the electronic aids off entirely, at which point the car becomes really quite playful. It’s also immensely helpful that you can mix and match engine, suspension and gearbox settings to achieve the set-up you desire. For instance, the sweeter Sport steering setting can be matched with the fierce accelerator response of the Sport Plus mode.

Thankfully, making sure the rear tyres get exactly the right amount of power is easy. The engine may be turbocharged but it responds quickly with just the briefest of pauses when you put your foot down. That it sounds far better than four-cylinder rivals is a massive bonus, too, and there's also lots to like about the steering; its weighting feels natural and there’s plenty of feedback filtering up through the front tyres to your fingertips, although the rival Alpine A110 steers even more sweetly.

With its higher centre of gravity and heftier weight, the M2 Competition isn't as agile as the A110 or Porsche 718 Cayman through bends, but it resists lean exceptionally well without subjecting passengers to an overly stiff ride. It's firm, but the M2 deals with bumps effectively enough – if not quite as adroitly as the Cayman – thanks to exceedingly well judged damping that prevents things from feeling bouncy.

As standard, the M2 Competition comes with a six-speed manual gearbox, with a seven-speed DCT automatic optional. While the manual can be slightly obstructive if you’re changing gear really quickly, we'd still pick it over the pricey auto for the extra interaction it provides.

The M2 CS, meanwhile, takes everything we love about the Competition and ramps it up a notch. The engine, for example, has been carefully tuned so it’s just as well suited to the track as it is the road. There’s an extra 40bhp available at 6250rpm (around 1000rpm higher than in the Competition) – perfect when you’re at maximum attack on a track day – but there’s also bags more grunt throughout the rev range; maximum torque arrives at 2350rpm, and remains on tap until 5500rpm.

That extra grunt, combined with more aggressive gearing, means that the M2 CS feels quite a bit punchier than the Competition at normal road speeds. Even in fourth and fifth gear on a country road, the CS surges forward with real determination. Also, while the manual ‘box feels a natural fit for the Competition, the DCT gearbox is right at home in the CS, where its snappy upshifts and smooth, perfectly blipped, downshifts help make the most of the extra power. With it fitted, BMW also claims a 0-62mph time of just 4.0sec; 0.2sec quicker than the M2 Competition and 0.4sec quicker than the Cayman GT4.

And where the Competition is playful in the way it deploys its power, the CS is even more delicately controllable. With its sharper steering and an electronically operated M differential, you’re given even more confidence to play with the balance of the car at normal road speeds.

With its heavily retuned suspension and adaptive dampers, the CS’s feels even more immediate through quick changes of direction than the passively damped Competition, with less roll and better body control. But is it more fun than a Cayman GT4? Well, ultimately, this depends what you consider to be ‘fun’. It might be a clichéd metaphor, but the CS still feels like a sledgehammer in the company of the scalpel-sharp GT4. 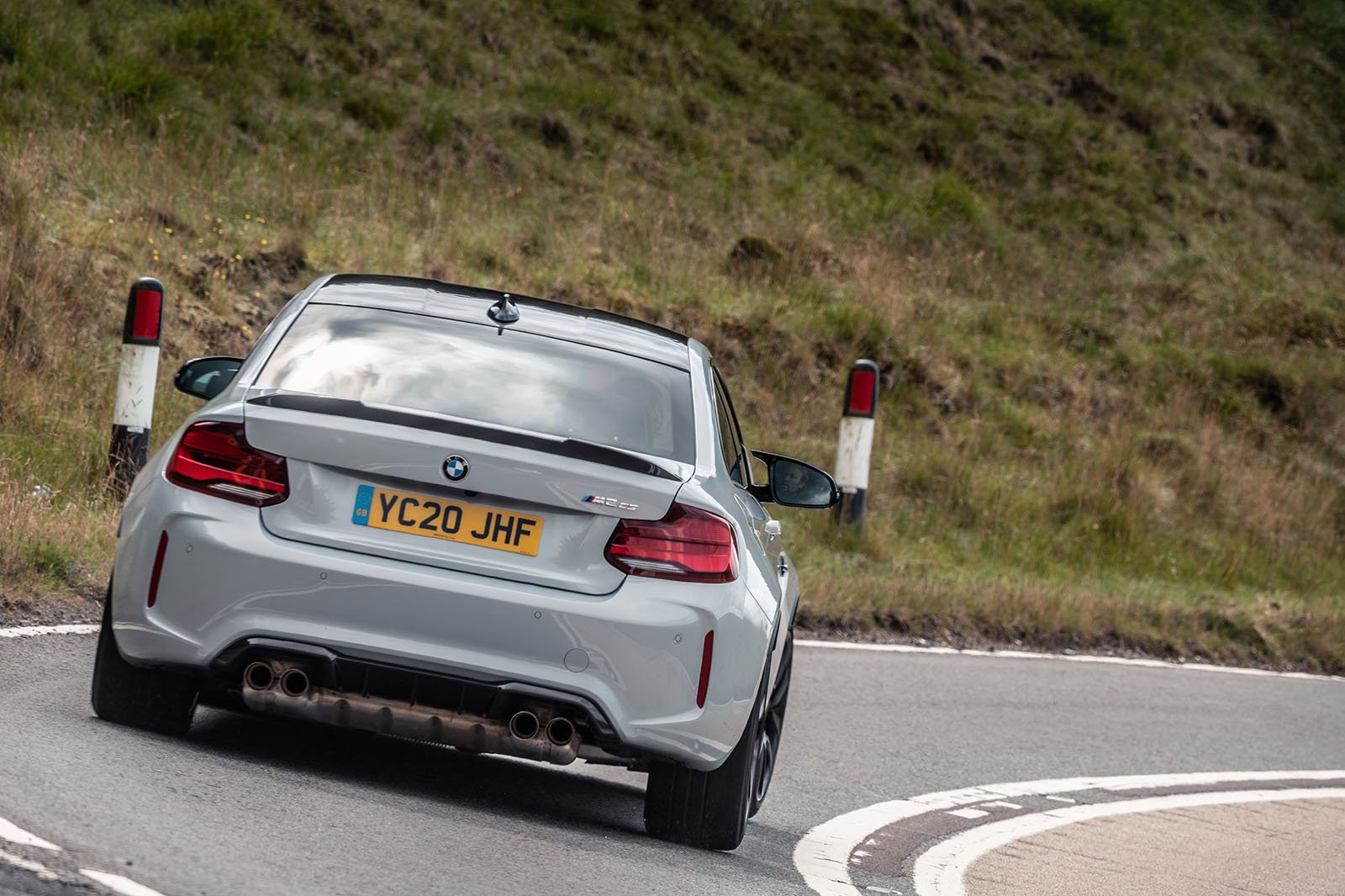