We have few complaints here. Extend the front seats all the way back and only a lofty soul will struggle with leg room, and there's absolutely loads of head room. Even models fitted with the panoramic sunroof won't put you at risk of smearing hair gel on its glass underside. By comparison, fit a 5008 with a panoramic roof and the head room is greatly compromised.

The interior is suitably wide as well, with a decent-sized centre armrest between driver and passenger. Underneath that is a vast cubby with a slidable tray; this offers various storage options, including enough space for a laptop if you remove the tray entirely.

On the downside, the door bins are a little narrow and the glovebox isn’t huge.

Were we solely reviewing the five-seat CR-V, this would be a five-star section. First of all, the wide-opening doors and low sills give great access, and it’s massive inside. It has head and leg room to match the very best in the class, including the enormous Kia Sorento, and there's loads of foot space under the front seats, too. It’s also good for three in the rear because it's so wide, and the central tunnel that runs along the floor is so insignificant the middle passenger has plenty of room for their feet, too.

Here’s the ‘but’, though. Order the seven-seat model and you get sliding and reclining rear seats – a feature we usually welcome –  while the five-seater has just the latter. However, the CR-V’s sliding mechanism raises the second row of seats up to such an extent that taller occupants will struggle for head room. It’s in even shorter supply for the middle passenger, who's seat is raised still further

As for the two foldout seats in the third row, they are tiny and only really fit for small kids and short journeys. You can just about fit adults in the rearmost seats of a 5008, while the Kia Sorento is the best car in this class if you want a truly spacious seven-seater fit for adults. 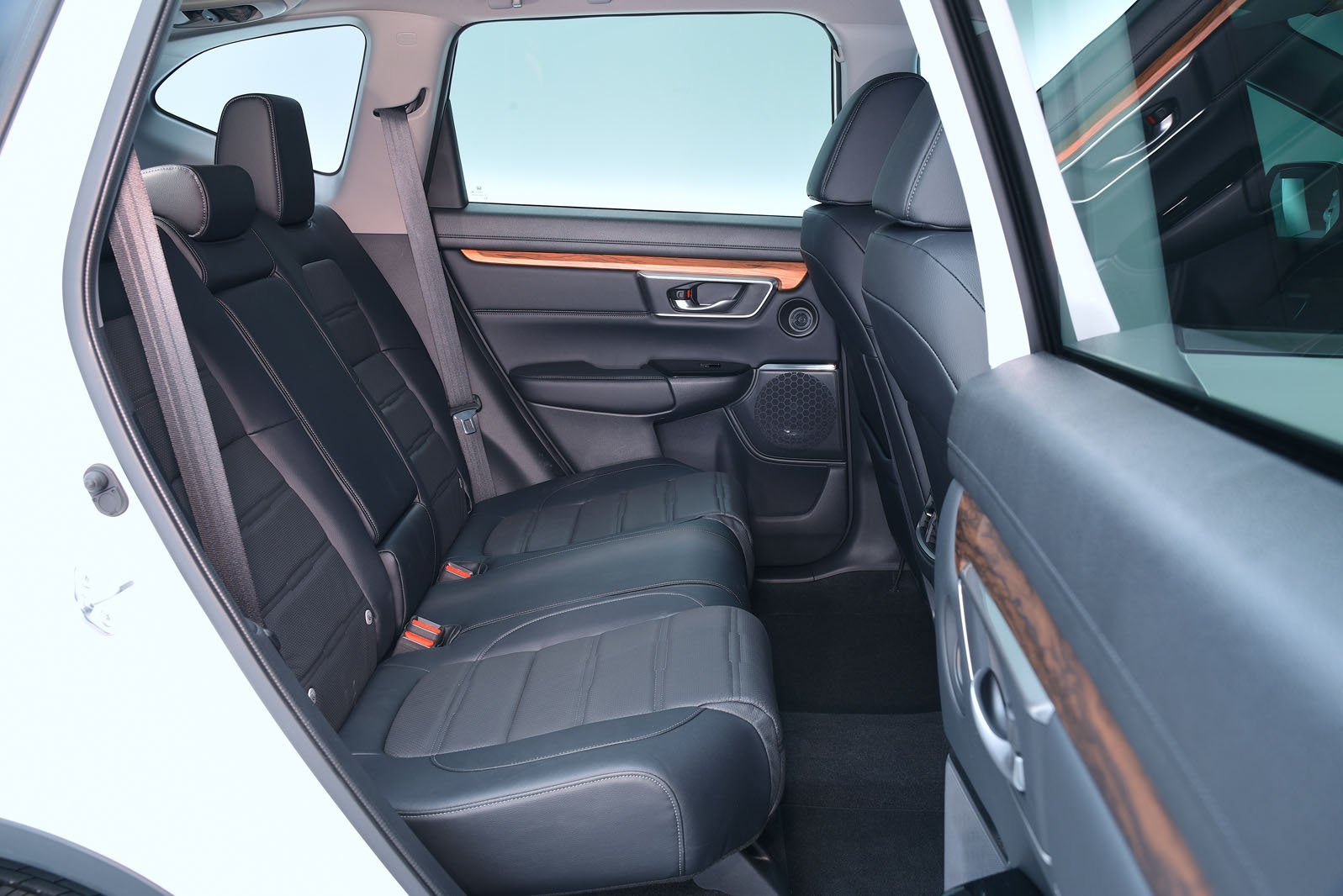 If you want front passenger seat height or lumbar adjustment you need to upgrade to mid-spec SR trim, and no CR-V offers a fold-flat front seat — to grant you the room to load super-long items from the dashboard to the edge of the tailgate. The 5008 does.

The rear seats split 60/40, rather than the more useful 40/20/40 arrangement that you get in the 5008 or Volkswagen Tiguan Allspace. As we said above, the five-seat models get reclining rear seats but only the seven-seaters get a sliding rear bench.

You do get handy levers next to the tailgate to release and fold down the rear seats easily.

Again, this depends on whether you have the five or seven-seat model as to whether it's recommendable or not. Five-seaters have great, if not class-leading, boot that will fit large buggies with ease. We fitted nine carry-on suitcases below the parcel shelf, which is the same number as the C5 Aircross, one more than the Land Rover Discovery Sport, but one less than the massive boot you get with the Sorento.

The standard variable-height boot floor adds flexibility and makes it easier to slide in heavy items on board when the rear seats are folded down – when it's raised it irons out the step in the floor.

Seven-seat versions are less cleverly configured. Honda has essentially bolted the two rearmost seats onto the boot floor, rather than integrating them into it properly, as most rivals do. This means the boot size is reduced considerably and awkwardly shaped. If you want a seven-seat SUV, we really advise buying something else instead.