The Mercedes GLA’s dashboard is almost identical to the A-Class’s, but its driving position isn’t. You sit significantly higher, so there’s no mistaking it for anything other than an SUV, even if the Range Rover Evoque and Volvo XC40 place you even higher up.

You’re unlikely to have much difficulty getting comfortable because there’s a wide range of adjustment. Plus, the sports front seats in the AMG Line cars we tried support you in all the right places.

A 7.0in digital instrument cluster is standard whether you go for AMG Line trim or entry-level Sport, but can be enlarged to 10.25in by adding the Premium package. This also brings the larger of the two infotainment screens (see below), making it appear that there's one giant widescreen across more than half the width of the dashboard.

Forward visibility is excellent, thanks to slim windscreen pillars and the raised driving position. You can also see more of what’s behind you than in a Volvo XC40 because the GLA’s window line doesn’t rise as dramatically towards the rear.

To remove any guesswork when manoeuvring, all models come with a rear-view camera as standard, but you’ll need to add the Executive pack if you want front and rear parking sensors as well.

Powerful LED headlights are standard, while adaptive LED headlights, which can remain on main beams without blinding other drivers, are part of the Premium Plus package. 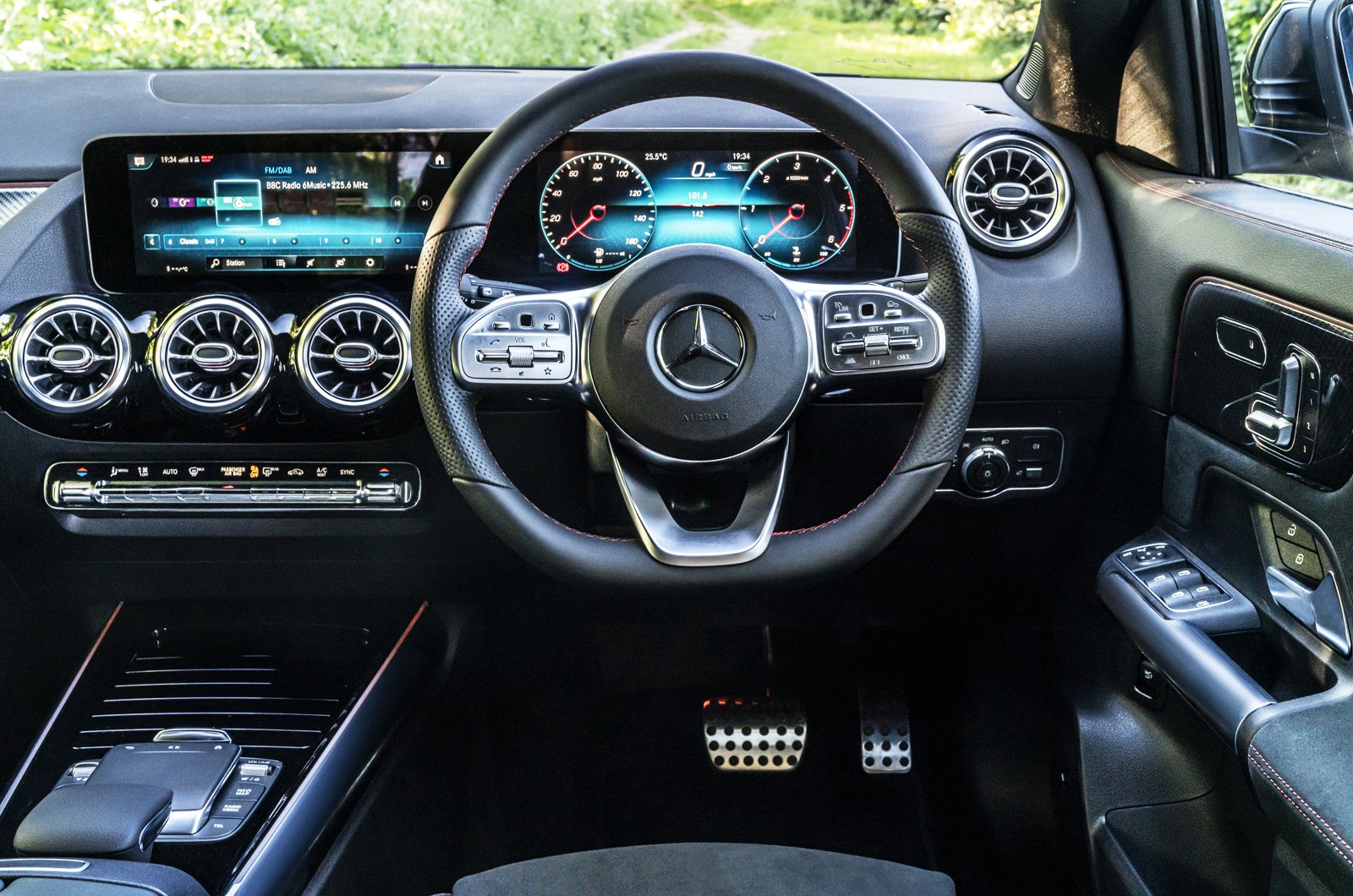 All Mercedes GLAs have at least a 7.0in touchscreen with sat-nav and a DAB radio. We’d recommend upgrading to the optional 10.25in screen that comes with the Executive and Premium packages – it looks better and you gain Apple CarPlay and Android Auto smartphone mirroring plus wireless phone-charging.

Using the touchscreen is fine if you're parked, but when you're driving it's easier to access the GLA’s systems via the touchpad between its front seats, or via the tiny touchpads on its steering wheel. These aren't quite as intuitive as the BMW X1's rotary controller, but once you get used to them they're far less distracting than the touchscreen-only setups in the Audi Q3, Range Rover Evoque and Volvo XC40.

You also get a Siri-style personal assistant as standard. To wake it up, you say "Hey Mercedes" then, in theory, you can control various aspects of the car, from the sat-nav to interior temperature, by speaking to it. There’s also a USB charging port in the front and two USB type C ports in the rear, so the kids can keep their devices charged up on long journeys – assuming you have the necessary adaptor cables.

If there’s one thing about the Mercedes GLA that we'd award an A-star grade, it’s the look of the interior. It’s flamboyant and more in keeping with a luxury saloon than a family SUV thanks to lashings of shiny piano-black plastic, leather, wood and metal inserts.

The jet-style air vents, borrowed from the E Class Coupé, lift the overall impression, especially at night when they glow like afterburners. So, visually, this interior eclipses all rivals'.

However, where the GLA falls down a little is its outright build quality. It's generally good, but there’s some flex in the climate control panel, which causes it to lose a star compared with the X1 and XC40, which have interiors that feel more solid.