We’ve yet to try the entry-level GLA 180, but this 1.3-litre engine is no ball of fire in Mercedes' A-Class hatchback and is likely to struggle in the bigger, heavier GLA. By contrast, the GLA 200 could well be the sweet spot of the range. Admittedly, we're still waiting to sample it in the GLA, but it’s our pick of the A-Class line-up, providing effortless oomph for relaxed cruising. In the GLA it dispatches the 0-62mph sprint in 7.1sec – quicker than the 7.6sec a BMW X1 20i can muster.

If pace is truly important to you, though, you’ll want to look at the GLA 250. It’s hot hatch fast and its plentiful low-rev urge makes it feel pleasingly brisk even when you’re not thrashing it. There’s also an eco-friendly plug-in hybrid, the GLA 250e, which uses a version of the 1.3-litre petrol engine paired with an electric motor that significantly boosts its performance. It’s only fractionally slower than the GLA 250. Official figures suggest it can take you 37 miles on pure electric power – further than rival plug-in hybrids the X1 xDrive25e and the Volvo XC40 Recharge T5 (31 and 28 miles respectively).

As for the diesel engines, we suspect the 200d will turn out to be all you need, based on how impressive it is in the A-Class. However, in the GLA, we’ve so far only tried the more expensive 220d, which pulls strongly throughout its rev range and generally feels in tune with the standard eight-speed automatic gearbox.

Ride comfort is decent, even on the relatively large 19in wheels and lowered suspension fitted to AMG Line models. The Mercedes GLA doesn’t breeze over ripples and expansion joints as effectively as the Volvo XC40, but it suffers less from side-to-side sway and still takes the sting out of potholes.

The optional adaptive suspension, which stiffens or softens depending on which mode you're in, feels like an unnecessary expense. 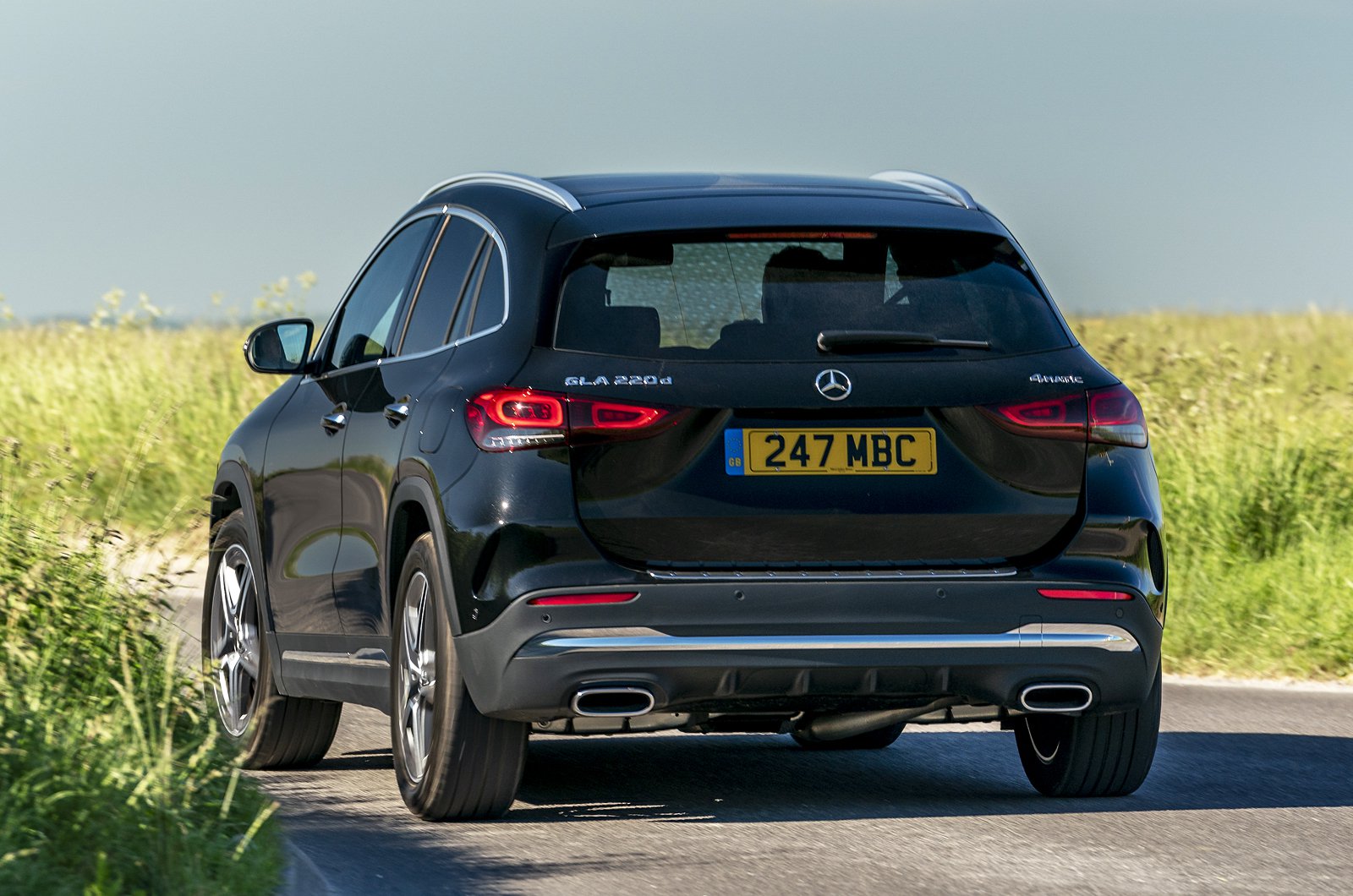 A high ride height never helps a car’s handling so it’s no surprise that the Mercedes GLA’s body leans over a fair bit in corners compared with the A-Class. Fortunately, this happens progressively enough that it isn’t unsettling, and the GLA feels more controlled than a Range Rover Evoque or Volvo XC40.

The steering is a bit numb just off centre, but it improves greatly after that, letting you place the front wheels with confidence. You can make it more weighty and reassuring by putting the car in Dynamic mode. In Comfort mode, the steering is super-light and well suited to town driving.

The Audi Q3 grips the road harder in corners, but the GLA gives you plenty of warning before it begins to slide.

The range-topping Mercedes GLA 250’s petrol engine combines hush at low speeds with a sporty rasp at high revs. And while the diesel GLA 220d is rougher sounding and sends some vibrations through the car when you’re slowing to a halt, it’s still pretty refined for a four-cylinder diesel.

The GLA 250e, meanwhile, is blissfully quiet in electric mode, but sounds coarse when you work its 1.3-litre petrol engine hard. The transition between those two power sources isn't especially smooth either, and brake pedal feel isn't as consistent as it is in non-hybrid GLAs, which can make coming to a gentle stop a challenge.

Some wind and road noise enters the GLA on the motorway, but it isn’t excessive. There is quite a bit of suspension noise over lumpy roads, though. And while the automatic gearbox is mostly slick, downshifts can be a little jerky at lower speeds.