Fast, good to drive and now available with a much bigger boot; is the Volkswagen Golf R Estate a winner?...

Nobody likes late deliveries, so postal services across the land should really be considering getting themselves a fleet of Volkswagen Golf R Estates. After all, what better delivery vehicle could there be than a load-lugger with the ability to rocket you and a boot full of parcels from 0-62mph in just 4.9sec?

Of course, hot versions of practical vehicles are nothing new, as anyone old enough to remember the touring-car-inspired Volvo 850 R and V70 R of the ‘90s can attest. And, while Volvo is no longer part of that mix, Cupra will offer you a slightly detuned Golf R Estate in the form of the Cupra Leon Estate, or, for not a huge amount more, you can have an Audi S4 Avant.

Of course, even SUVs are getting into the mix these days, including the likes of the award-winning Ford Puma ST and the Hyundai Kona N. Even Volkswagen itself has a brace of speedy SUVs in its portfolio, with the Volkswagen T-Roc R and Tiguan R. All of these offer a high degree of versatility and a smile-inducing drive, while providing the higher stance that's all the rage these days. So what can the Golf R Estate do to stand out? Let’s find out. 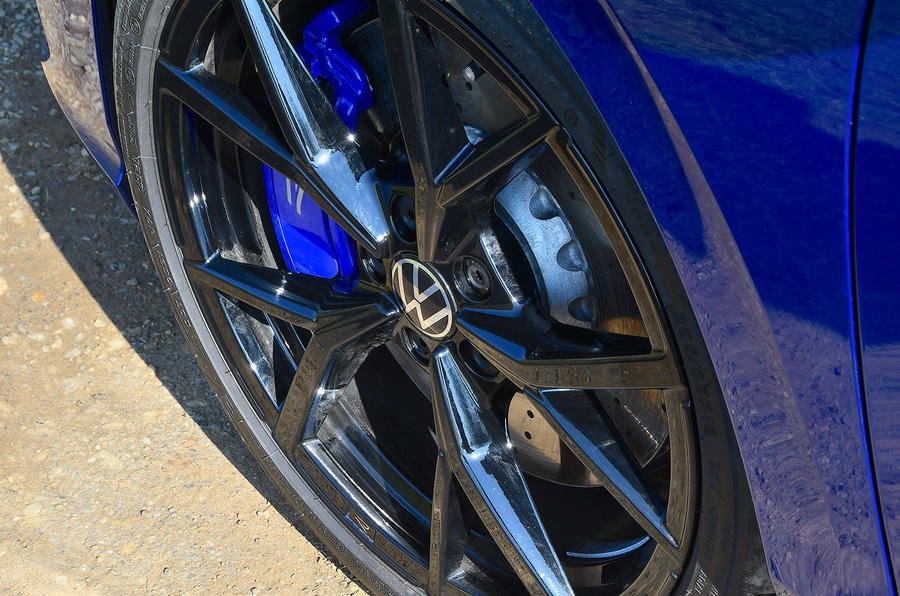 When we say this is a quick estate car, we mean it. Even the official acceleration time might be a touch conservative; we clocked a 0-60mph time of 4.4sec using its easily engaged launch control. That’s a little bit swifter than the equivalent Cupra Leon Estate, and that's to be expected, since the Volkswagen Golf R has an extra 10bhp for a total of 316bhp.

That power is deployed through a seven-speed dual-clutch DSG gearbox and standard four-wheel drive – more on the latter in a moment. The gearbox is mighty impressive, and a big improvement on previous Golf R gearboxes; it's smooth and jerk-free, even when downshifting at lower speeds in the most aggressive Sport shift mode. It also avoids the old DSG trait of being hesitant when merging onto roundabouts, finally giving you the confidence to go for a gap in the traffic without it dithering.

And if you want to keep farther ahead of said traffic, there’s always the £2160 Performance Pack, which raises the top speed from 155 to 166mph, shortening your commute time if you happen to be heading to the office via a derestricted German Autobahn. The pack also includes snazzy 19in alloy wheels, and a drift mode for a moment of tyre-smoking track-day hilarity before you get black-flagged. 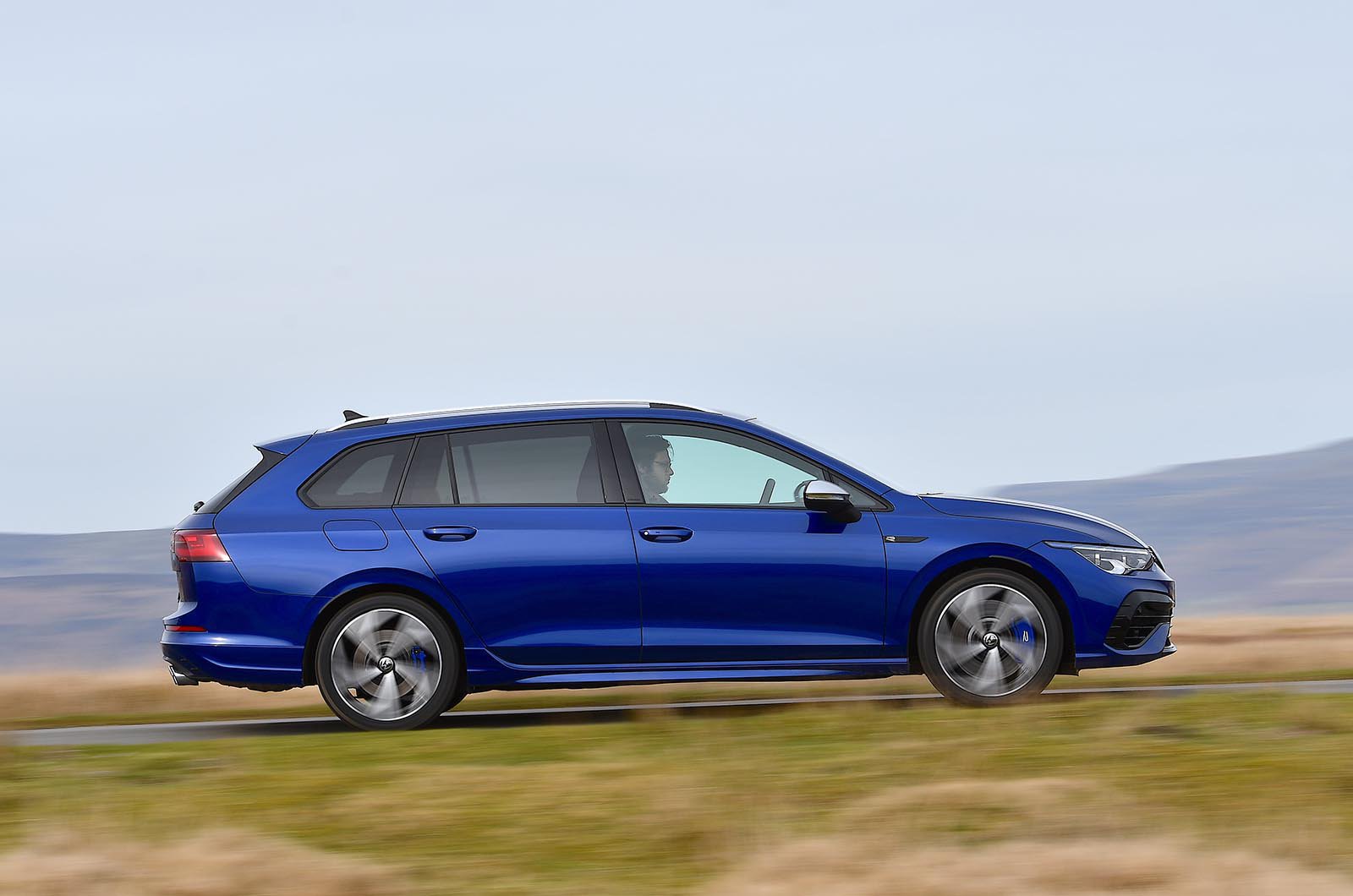 You really don't need that pack, though; it's great fun to drive even without it. The Golf R offers tenacious levels of grip in corners with very little fuss, and the quick steering also helps the car feel eager to turn in to bends. Stick everything in the most aggressive R (for Race) drive mode and you can feel the engine’s power being sent rearwards through its clever four-wheel drive system, before slingshotting you out of the corner. It has flair, too; with excellent balance, a progressive power delivery and a tolerant traction control system, it allows you to be creative in corners by stepping the rear end out. This smile-inducing demeanour adds a layer of dynamism that the Cupra Leon 310 will struggle to match.

If there’s one area that’s a little lacking in excitement is engine noise. The engineers must have known this because the sportier drive modes have a setting for a bassier augmented engine tone piped into the cabin. It never comes across as being particularly genuine and is actually better switched off before it gets on your nerves. You also can’t option the Akrapovic exhaust system with your Golf R Estate as you can with the regular hatch, but it's probably just as well as it's neither that loud or cheap. 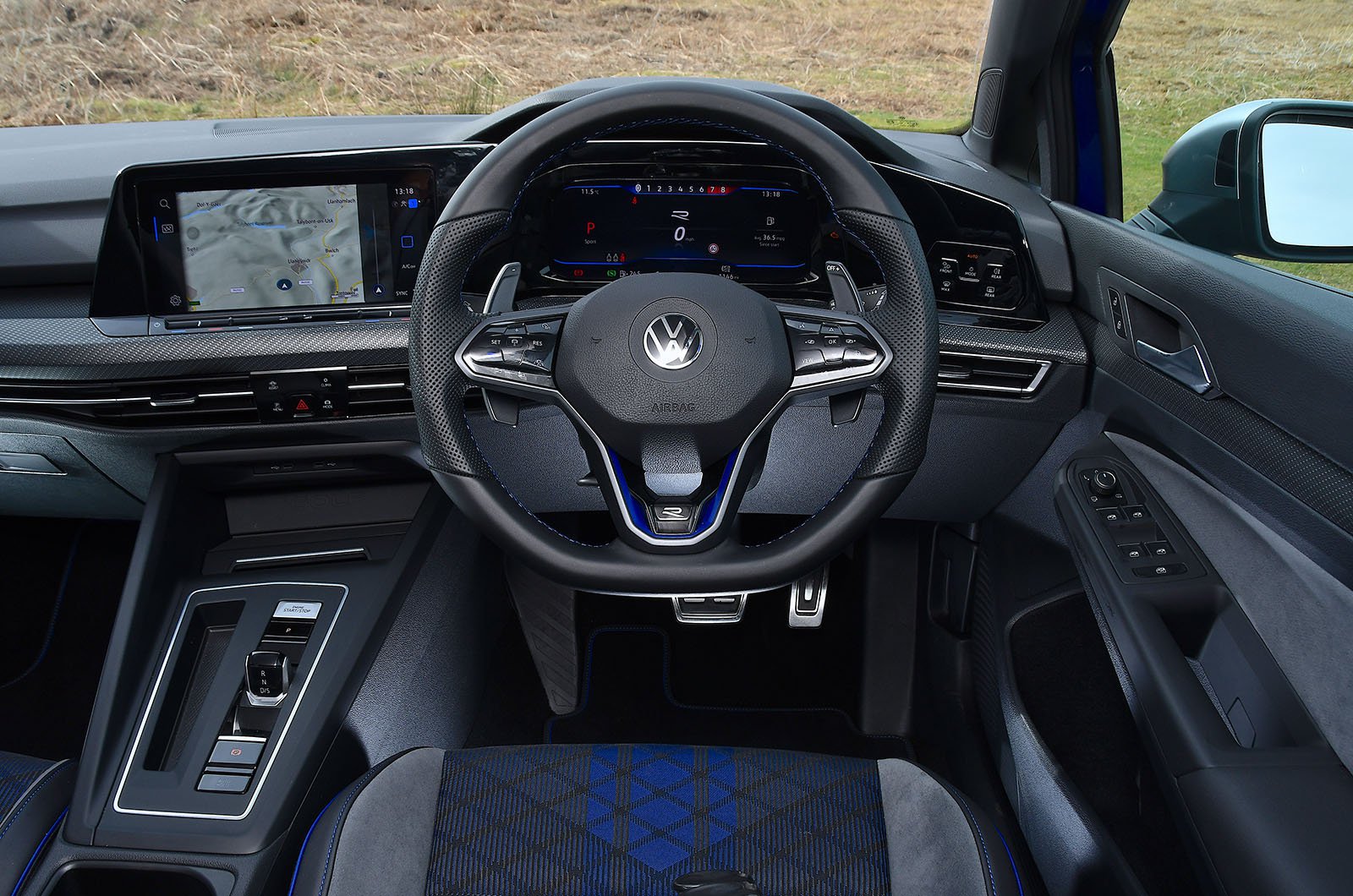 To set itself apart from any old regular Golf, the R gets its own chunky three-spoke steering wheel with touch sensitive controls, some carbon-effect trim and sports seats with blue accenting. These aren't too aggressively bolstered, so those of a fuller figure won’t feel wedged in, but they still do a good job of keeping those of a slighter shape in place during hard cornering.

However, no amount of ritzy trim can disguise the fact that the Golf’s interior has recently taken a nose-dive in terms of quality, with hard plastics adorning every surface below eye-level. Ease of use has taken a hit too, because most of the controls – such as those for the air-con – have been relegated to the central touchscreen.

The button to select the raciest ‘R’ driving mode is located on the steering wheel’s left spoke, where it's all too easily hit with your palm by accident while driving. The same is true of the heated steering wheel button (a standard feature, although heated seats are, weirdly, an option) on the right spoke – an irritation that’ll get you hot under the collar after a while.

Elsewhere, you'll find the same visibility, space, and storage amenities as offered by the regular Golf Estate; if you want to delve into greater detail about that, please head to our dedicated Volkswagen Golf Estate review.