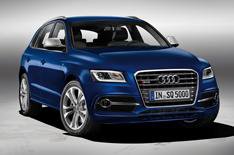 The new Audi SQ5 TDI is Audi's first diesel-powered 'S' performance model. It's a sporty, range-topping version of the Audi Q5 SUV, with a range of cosmetic and chassis upgrades.

Power comes from a twin-turbo 3.0-litre V6 diesel engine that develops 309bhp and 479lb ft of torque. An eight-speed automatic gearbox and four-wheel drive are standard.

The Audi SQ5 TDI will be a key rival for the BMW3 Xdrive 35d M Sport, and the forthcoming Porsche Macan.

The SQ5 TDI will be available to order from October, and will cost from around 44,000. First deliveries are expected in spring 2013.

A special-edition version - called SQ5 TDI Audi exclusive concept - will be on display at the 2012 Paris motor show later this month. It has special paintwork and interior trim, and a limited run of 50 of these will be sold in Europe in early 2013. Audi says there are no plans for this model to be sold in the UK, however.