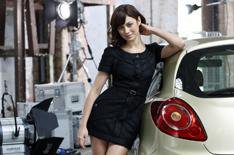 Princes William and Harry will be among the audience tomorrow night to see the new Ford Ka get an exclusive test drive in the latest Bond movie, Quantum of Solace

A star-studded audience will gather in Londons Leicester Square to watch the films world premiere, in which the feisty leading lady Camille, played by Olga Kurylenko, gets behind the wheel of a gold version of the all-new Ka.

However, the Ford may struggle to make its on-screen presence felt. Not only must it outshine former model Kurylenko, but it must also compete with Bond's Aston Martin DBS.

The new Ford Ka goes on sale later this year.