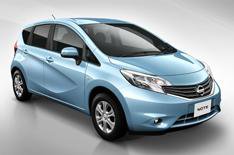 Citroen C4 Picasso
What is it? All-new five and seven-seat MPVs
Price from 17,500 (est)
On sale Summer

The new Citroen C4 Picasso range will follow a tried-and-tested formula when it is launched next summer. As before, there'll be a five-seater and a longer Grand C4 Picasso with seven seats.

The all-new body is expected to look similar to today's car, but spy shots indicate a chunkier front end and a wider tailgate.

Inside, an update of the MPV's folding seat system is likely, while the C4 Picasso's unusually large windscreen is likely to be retained.

Nissan Note
What is it? All-new MPV with sportier styling
Price from 12,000 (est)
On sale Autumn

European Nissan Note will be produced in Sunderland; expect cosmetic changes inside and out, compared with this Japanese model

The Nissan Note has long been popular with supermini buyers wanting a little MPV practicality, but it has always had rather tame styling. However, if the Japanese-market edition is anything to go by, the new Note will have much racier looks.

The styling isn't likely to affect the car's core features, though. Room for five adults, good stowage space and a flexible seating arrangement should all be retained.

The engine range will almost certainly get a shake-up, however, with the four-cylinder petrol and diesel motors of the previous-generation car being joined by naturally aspirated and supercharged versions of Nissan's new three-cylinder petrol powerplant.

Despite the early debut of the new Note in Japan, Nissan GB says the UK car is still the best part of a year away, and that its cabin finish and quality will be much improved from the home-market version we've seen so far.

Toyota Verso
What is it? Updated MPV gets the latest family face
Price from 18,000 (est)
On sale Spring

The Toyota Verso gets more of a family look for 2013, bringing its front-end styling in line with models such as the Auris and Prius.

The Verso comes with a choice of 1.6 and 1.8-litre petrol engines, and a revised 2.0 diesel that improves efficiency to reduce the car's CO2 emissions to 129g/km. There's also a more potent 2.2 turbodiesel option.

The core cabin layout remains, but there are classier trim materials in key areas, and Toyota claims that improved sound deadening will raise the car's refinement.