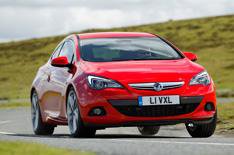 The Vauxhall Astra GTC is now available with a 128bhp 1.7-litre diesel engine that averages 62.8mpg and produces 119g/km of CO2.

The figures are good enough for the GTC to match the economy of its main rival, the VW Scirocco 2.0 TDI Bluemotion, and fall just 1g/km shy of its CO2 emissions.

Both models qualify for free road tax in the first year and a 30 annual fee thereafter. However, the Scirocco has 10bhp more than the GTC and is 0.7 seconds quicker to 62mph.

Whats the 2012 Astra GTC 1.7 CDTi 130 like to drive?
The new engine generates a healthy-sounding 221lb ft of torque. Unfortunately, this comes between 2000 and 2500rpm, a window so narrow that any flexibility you might have been hoping for by choosing a diesel just isnt realised.

The 2.0 CDTi version of the GTC pulls much harder from low revs, although it is more expensive, too.

The 1.7 CDTi 130 engine feels most at home when youre cruising on the motorway, where its impressively refined. However, it becomes boomy and sends vibrations through the pedals when you work it harder.

The GTC is a refined cruiser, but the ride disappoints

Its a real shame, because the GTC has sharp steering and handles well aside from rare instances of poor body control during the most violent changes of direction.

Ultimately, though, its best with the 1.6-litre turbo petrol engine, where better-spaced gears and a wider power band help it shine.

Whats 2012 Astra GTC 1.7 CDTi 130 like inside?
Unsurprisingly, the dash looks very similar to any other Astras, which means its covered in buttons and quite confusing at times.

You dont get as good a view out of the back of the GTC as you do in the hatchback because the rear window is much smaller.

Still, theres bags of head- and legroom upfront, and enough space for a brace of burly adults to sit in reasonable comfort in the back.

The boot has a generous 370-litre capacity, too.

Opt for an entry-level Sport model and the list of standard equipment includes alloys, air-conditioning, and a DAB radio, which is all most people will need.

Dearer SRi models, such as our test car, add xenon headlamps and automatic lights and wipers.

The back is reasonably roomy for a coupe, but rear vision is restricted

Should I buy one?
The GTC 1.7 CDTi 130 is a frugal choice, plus it has the precise handling and sporty styling that coupe buyers demand.

Were pretty sure those same buyers will also expect good performance, though, and thats where the 1.7 CDTi falls down; this engine just isnt flexible enough.

Choose the 177bhp 1.6-turbo petrol car, on the other hand, and theres just enough poke. Combine it with Sport trim and the standard 18-inch wheels, and youll get to experience the GTC at its best.