More for you |
Promoted | 5 reasons why it makes sense to go electric todayBig savings on our Car of the Year Awards winnersWhat Car? Awards 2021: The best cars you can buy2021 Nissan Qashqai: electric and hybrid power revealedCar of the Year 2021
Home
News
VW Up 5dr revealed
news 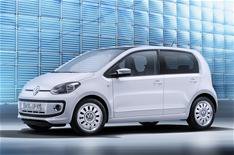 These are the first pictures of the new Volkswagen Up 5dr, which goes on sale later this year.

The car is the five-door version of our Car of the Year. Prices are yet to be revealed, but VW sources told us it will cost less than 400 more than the three-door model, so the entry-level car is likely to cost around 8250.

Like the Citroen C1, Peugeot 107 and Toyota Aygo, the VW Up 5dr has pop-out rather than wind-down rear windows. The five-door model has a different side window line to the three-door model, too, with a straight lower edge. Otherwise, the two models look identical.

The Up 5dr line-up is expected to mirror that of the Up 3dr. Prices are due to be announced soon, at which point the new model will be available to order. First deliveries of the Up 5dr are expected in September.

The VW Up 3dr is on sale now. The closely related Seat Mii and Skoda Citigo go on sale in May and June respectively.