Toyota isn’t a name often associated with vans. People largely think its commercial vehicle repertoire begins and ends with the Toyota Hilux pick-up truck, but Toyota has a long tradition of making light commercial vehicles, particularly those in the mid-sized sector.

The Toyota HiAce was introduced in the 1960s and there have been many other ‘Ace’ versions since, and while the Toyota Proace is in no way a relative or even a descendant of models from the past, the name certainly sets it out as a Toyota van.

Of course, the Proace isn’t exclusively a Toyota product – few vans these days are unique to one manufacturer. The Toyota Proace is based on the Citroën Dispatch, Peugeot Expert and Vauxhall Vivaro, and has been since 2013 when the Proace name first appeared.

The current version is based on the third and most recent generation of the Dispatch/Expert platform and is, therefore, a rival to other titans of the segment including the Volkswagen Transporter, Ford Transit Custom and Mercedes Vito.

Like the other vans, the Proace gets its own individual styling as well as a shared interior and cleaner engines. Shared parts between the Partner, Dispatch, Vivaro and Proace include everything from the bonnet backwards, with only the front two panels and headlight clusters varying between each of the vans. The rear portion is an updated version of the outgoing van, while the front is based on the Efficient Modular Platform 2 (EMP2) that Peugeot and Citroën both use for their passenger cars.

There are two engine options, the smaller of which also originates from the passenger car world. The 1.5-litre unit is available with either 100bhp or 120bhp and is paired with a six-speed manual gearbox. A more powerful 2.0-litre engine also comes with 120bhp or 174bhp options but it is only the bigger of the two that is available with an eight-speed automatic gearbox. Unlike the other vans from Peugeot, Citroën and Vauxhall, there is no middle (147bhp) power rating for the 2.0-litre engine.

The Proace has Compact, Medium and Long body lengths, but there is no option of a high roof model. Trims range from the entry-level Active to the top-spec Design option. There is also an Icon trim level in between. Toyota also produces a combi van version of the Proace that can seat up to nine people. 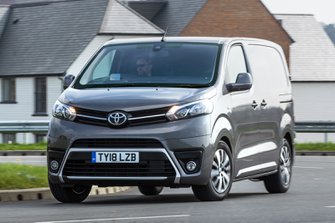