Most people will find the basics are pretty good. For example, there's lots of steering wheel adjustment – for in and out as well as up and down – and seat height adjustment for all trims. If you go for anything other than the entry-level SE trim you get an 'Ergonomic Active Drive's seat'. That means it comes with adjustment for the seat squab angle and length, as well as electrically operated four-way lumbar adjustment. It's comfortable to sit in, but sadly it doesn't have much in the way of side support to keep you propped up in corners.

Our biggest gripe is the lack of space between the clutch pedal and side of the footwell – if you've got big feet you'll snag the clutch pedal every time you pass it in search of the footrest. The pedals are also offset over to the right, which tends to annoy people with shorter legs.

In the 'good news' section, the heater controls are all physical knobs and buttons that are easier to use than touch-sensitive controls, and the analogue instruments are easy to see. You get a small digital screen between the dials, for information on things such as fuel consumption, media and telephone, but no option to have digital dials, which you can get, either as an option or as standard, in most of the Crossland's rivals.

Visibility isn't too bad at junctions because the side window line is quite low and the middle pillars are set back far enough that they don't impede your view – the DS3 Crossback and Peugeot 2008 are much, much worse in that respect. The base of the Crossland's windscreen pillars are quite fat, though, and you sit so far from the windscreen that most people won't have a clue where the end of the bonnet is. The rear pillars are also quite big compared with the Skoda Kamiq's, which is one of the easiest cars in the class to see out of in any direction, but the Crossland is far from the hardest.

Our favourite trim, SE Nav Premium, comes with front and rear parking sensors and a 360-deg camera, and all trims come with LED headlights. They are much brighter than halogen bulbs, which are all you can have on the Kia Stonic, when it comes to picking your way along unlit roads at night. 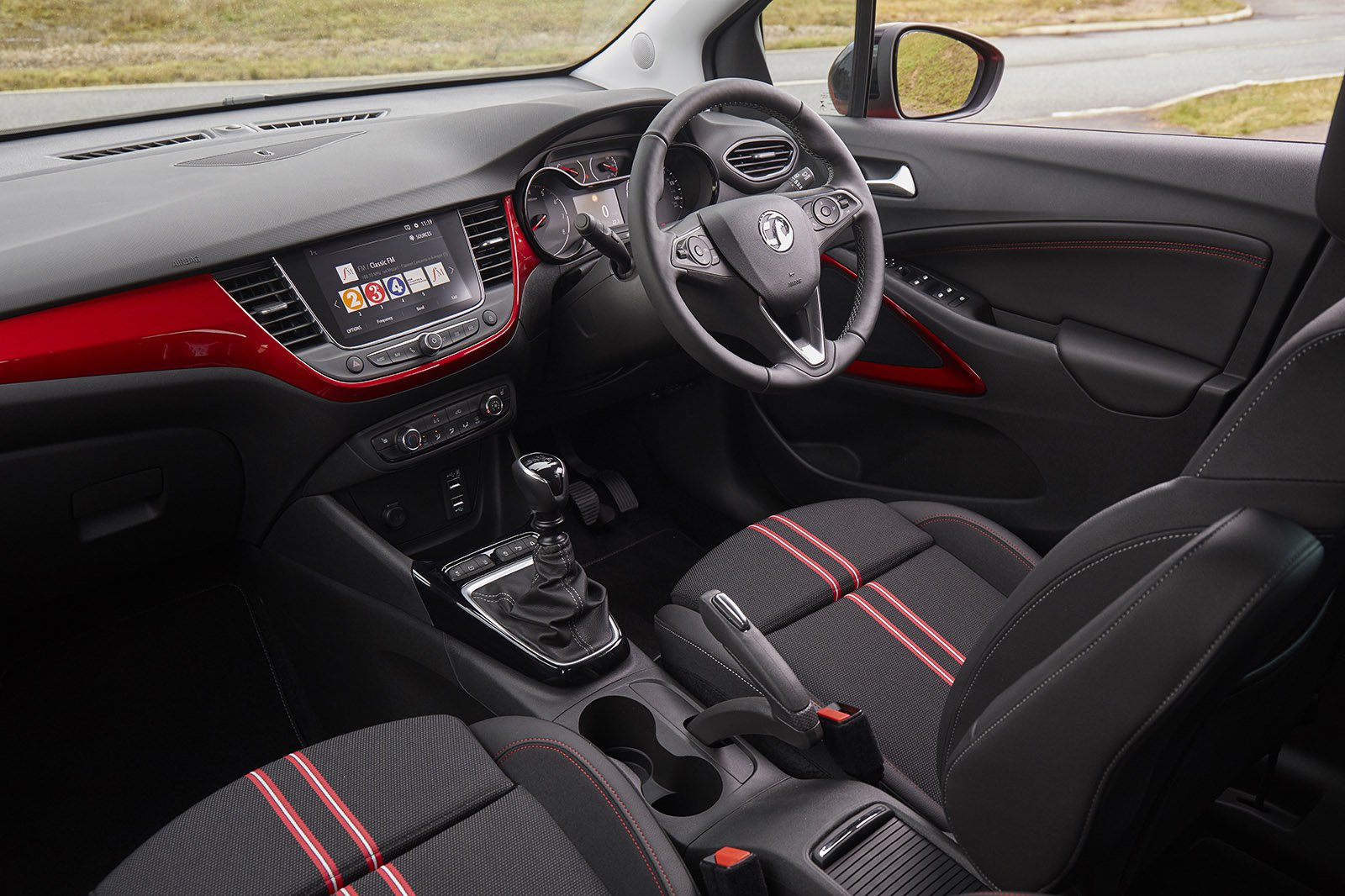 A 7.0in touchscreen is standard if you go for SE or Elite trim, which also include a DAB radio, six speakers, Bluetooth and, importantly, Apple CarPlay/ Android Auto, so you can use your smartphone and its apps from the screen. All the other trims have 'Nav' in their name, which, as you might imagine, adds in-built sat-nav and also enlarges the touchscreen to 8.0in. Wireless phone charging comes as standard on Elite Nav and the top Ultimate Nav trim.

The Vauxhall software is very similar to the Citroën and Peugeot software but if anything is a little more responsive and the menus are slightly better organised. It's still not that great, and you'll find much quicker and more useable software in the Seat Arona, Skoda Kamiq and Volkswagen T-Cross or T-Roc. The best systems in the class are those that offer a physical interface rather than just a touchscreen, which includes the Mazda CX-3 and Mini Countryman.

The interior of the Crossland is a little like the Ford Puma's. It looks smart enough at a glance, and there is a modicum of plusher, soft-touch materials – on the top of the dashboard, for instance – along with some chrome and gloss black finishers.

Is it the best in the class, though? No, because the surfaces feel a lot cheaper the farther your hand runs down the interior, and, in places, it doesn't feel that sturdy. A Nissan Juke has a much nicer overall ambience, as does the Skoda Kamiq. Rivals such as the T-Roc and T-Cross are more solidly made but have an abundance of harsh and unyielding plastics.