Getting comfortable behind the wheel of the Volkswagen T-Roc is easy; its seat cushion is comfy and there’s a good range of adjustment available – both to the seat and the steering wheel. There is a small demerit, though: none of the trims comes with adjustable lumbar support as standard. It's something that's well worth adding, because it'll only set you back the price of a pair of mid-range headphones and does wonders for your lower back support.

Another reason to buy the T-Roc is that you feel like you're in a proper SUV. The driving position places you farther from the road than many other small SUVs, with rivals such as the Seat Arona, Skoda Kamiq and Kia Stonic feeling barely any higher than a regular hatchback.

And finally, there’s a fine dashboard layout. All the knobs and buttons have been arranged with a great deal of sense, and the instrument dials are also clear. You can replace these with the optional Virtual Cockpit (standard from SEL trim up), which replaces the conventional analogue dials with a digital screen that presents a vast amount of information very clearly. It'll even show you a full-width sat-nav map – assuming you have sat-nav fitted, that is.

That relatively lofty driving position, combined with slim windscreen pillars, allows a great view of the road ahead. Rear visibility is more restricted – the Skoda Kamiq gives you a better view out the back – but because you get front and rear parking sensors as standard (on all but entry-level S trim), that's not a massive problem. And the T-Roc is still easier to see out the rear of than the Kia Stonic and Seat Arona.

There’s also the option of a rear-view camera or a bird’s eye view camera, both of which help you to spot any obstacles while parking. You can even add a self-parking system that should detect a big enough parking space and steer you into it all by itself.

Bright LED headlights, which offer great illumination at night, are standard on certain trims, including the Black Edition and SEL. These are a relatively pricey option on the other trims, but they make a massive difference compared with the standard halogen headlights. 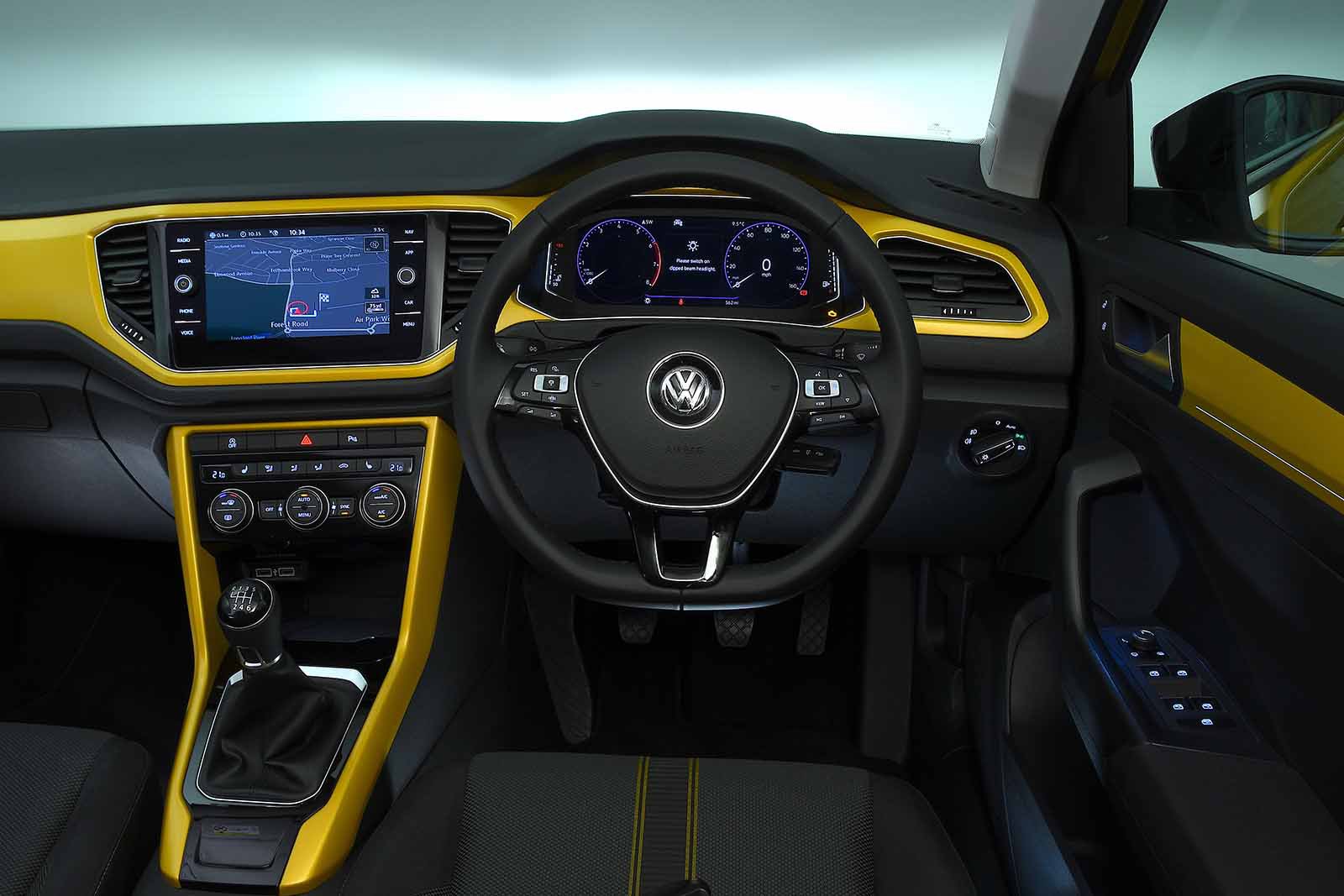 The T-Roc's standard 8.0in touchscreen infotainment system is positioned usefully high up on the dashboard. This is just as well, because, with no physical shortcut buttons – the kind you can feel your way around after a little familiarisation – no matter how familiar you are with the system, you have to take your eyes off the road to use it. The only saving grace is that the two physical knobs either side of the screen are intuitive to use; one is for the volume and the other is used to scroll down through lists.

To be fair, many of its rivals' infotainment systems use touchscreens too; the Mini Countryman's rotary controller offers something that's less distracting to operate. And otherwise, the T-Roc's system is fine to use, responding quickly to screen prods and providing well-structured menus that prove a doddle to understand.

What's more, Android Auto and Apple CarPlay smartphone mirroring is standard on all but entry-level S trim, where it's a reasonably priced option. This is great, because instead of paying for the in-built sat-nav, which comes as standard only from SEL trim up, you can use apps such as Google Maps or Waze, mirrored from your phone directly onto the car's screen instead. Voice activation is another option on all but the top trims (which have it as standard), while wireless charging, which is standard on a Ford Puma, isn’t available on the T-Roc.

Chances are you’re expecting the T-Roc to look and feel quite posh inside. After all, it's a Volkswagen, which has a history of providing upmarket interiors – even in cheaper models such as the Polo small hatchback.

Well, not here. The interior quality is actually the most disappointing aspect of the T-Roc. It feels surprisingly cheap inside, with hard, unyielding plastics being the order of the day throughout. The quality of the materials is roughly on a par with that of the cheaper Seat Arona and Volkswagen T-Cross, and a world away from the Nissan Juke's interior, or those of the premium-badged Audi Q2 and Mini Countryman. Even the Skoda Kamiq (the VW Group's value brand) provides plusher materials for less money.

This is one of the reasons why the cheaper end of the T-Roc range makes the most sense. Design trim, for example, brightens up the interior a little with a selection of coloured dashboard inserts and ambient interior lighting.