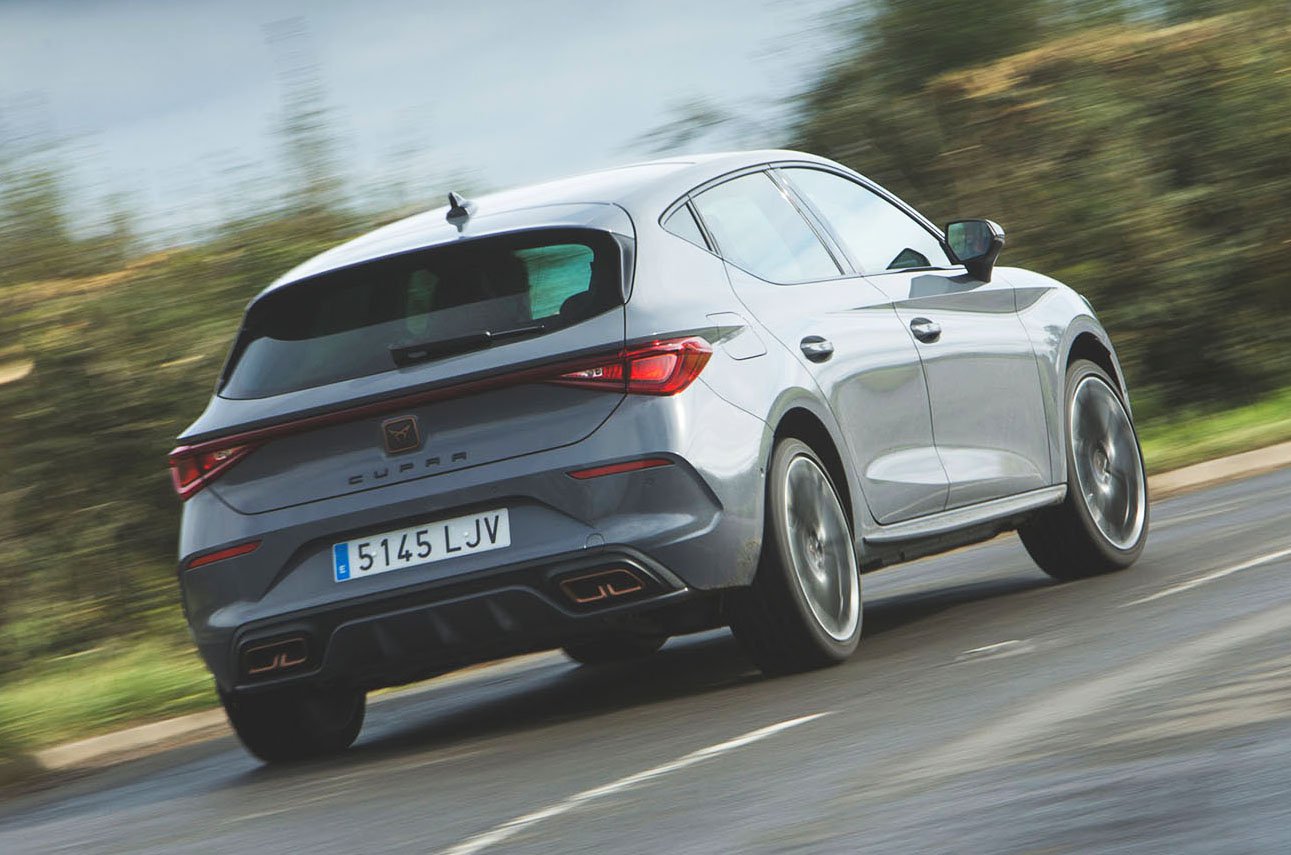 As we’ve mentioned, we’ve only driven the Cupra Leon eHybrid so far. Before we talk about that it’s worth saying that we’ve tried the 306bhp 2.0 TSI 310 engine, which you will be able to order with the range-topping Leon, in its SUV equivalent, the Cupra Formentor. That gave us a good idea of what the most powerful Leon will be like, which is very quick when you rev it out but also super torquey and flexible for everyday driving. And the Leon 2.0 TSI 310, like the Formentor, comes with 4Drive four-wheel drive as standard, so the power and traction it should offer could well make it one of the quickest-accelerating hot hatchbacks for the money.

The 1.4 TSI eHybrid, which we have driven, isn’t. Again, it’s a nice, flexible engine – especially with the electric motor adding extra low-end thrust to the petrol engine – but, unlike the 2.0 TSI 310, it’s not fast (for a hot hatch) when you really gun it. 0-62mph takes 6.7sec, which is only about a second faster than a regular Seat Leon 1.5 TSI 150 and miles off the pace of all its key rivals. Of course, you have to balance that with the fact that it will travel 36 miles (WLTP combined) without a drop of petrol being burnt on battery power alone, which its rivals can’t emulate.

Unfortunately, the battery adds weight, and as a result it’s not a thrill-a-minute hot hatchback in the bends. Where the Honda Civic Type R is like driving a racing car on the road and the Renault Megane RS’s tail-sliding antics are a pleasure seeker's paradise, the Leon eHybrid is a bit, well…”Merrh.” It’s alright.

It steers nicely – accurately, with a healthy weight build-up through corners – but it doesn’t change direction through left-right kinks anywhere near as lithely as its rivals, especially the Type R. And it spins up its front wheels too easily (the PHEV is front-wheel drive only) when you put the power down out of a bend, particularly so in the wet, causing the Leon to jink left and right as each tyre wins, then loses, the wins again, its individual battle for grip.

The version we tried came with adaptive dampers, which, like the Golf GTI’s, have three simple default settings (Comfort, Sport and Cupra) but also a number of settings beyond and in between those three, so you can really settle on a setting that suits. The trouble is that, while you can make it very compliant over softer folds in the road, anything sharp creates a thwack through the body. That wouldn’t trouble you in a Golf GTI.

Obviously, the engine is silent in its electric mode, which in an executive PHEV, like the BMW 330e, would be a selling point. But in a hot hatch? We’re not sure that it is, and we’re not sure about the noise it makes when the petrol engine is running, either. It’s a bit bland in the standard driving mode, but instantly erupts into an imitation 1970’s V6 Maserati if you select Cupra mode. That sounds exciting, true, but the reality is it’s rather silly, because it's so obiously fake.

Road and wind noise aren’t frightful for a hot hatchback with biggish tyres, but the brakes aren’t hugely confidence inspiring. A hot hatchback should have resolutely consistent and perfectly progressive brakes, but as the eHybrid’s regenerative system tries to recoup energy for the battery as you slow down, the brake pedal’s feel changes disconcertingly. Actually, they are good by the standards of any ordinary PHEV, just not by the standards of hot hatchbacks. And that sums up the eHybrid: it’s very good to drive for a PHEV; it’s not a good hot hatchback, though.