For the cheapest company car tax, though, you need one of the plug-in hybrids. The E300e EQ Power uses a 2.0-litre petrol engine and an electric motor. Together they deliver 316bhp and 0-62mph in 5.7sec. It proved quicker than the BMW 530e at our test track, effortless on the road and its official 34-mile electric range is up to scratch, too. The E300de EQ Power is broadly as quick and has the same electric range, but uses a diesel instead. Both hybrids are a lot slower in electric-only mode but still hit 70mph, just in a more leisurely fashion.

The Mercedes E-Class doesn’t ride perfectly but, to be frank, none of its rivals do either, unless you pay more money to get adaptive suspension. The E-Class has an adaptive set-up as standard and it's softer than a standard-spec BMW 5 Series M Sport. It's not as well controlled in Comfort mode, though.

What does that mean? Well, it'll jostle you around over lumpy or broken roads but stays pretty calm on motorways. It's generally more forgiving than the M Sport when you hit a pothole or speed bump, but it takes an extra bounce or two to settle down afterwards. Bigger alloy wheels make the ride worse.

The E300e and E300de models differ in having softer, non-adjustable ‘Comfort’ suspension. Again, this is pretty good on the motorway, but body control is noticeably poorer elsewhere, and the car still thumps through potholes. The AMG E53 has its own bespoke air suspension, which is firm but not uncomfortable. 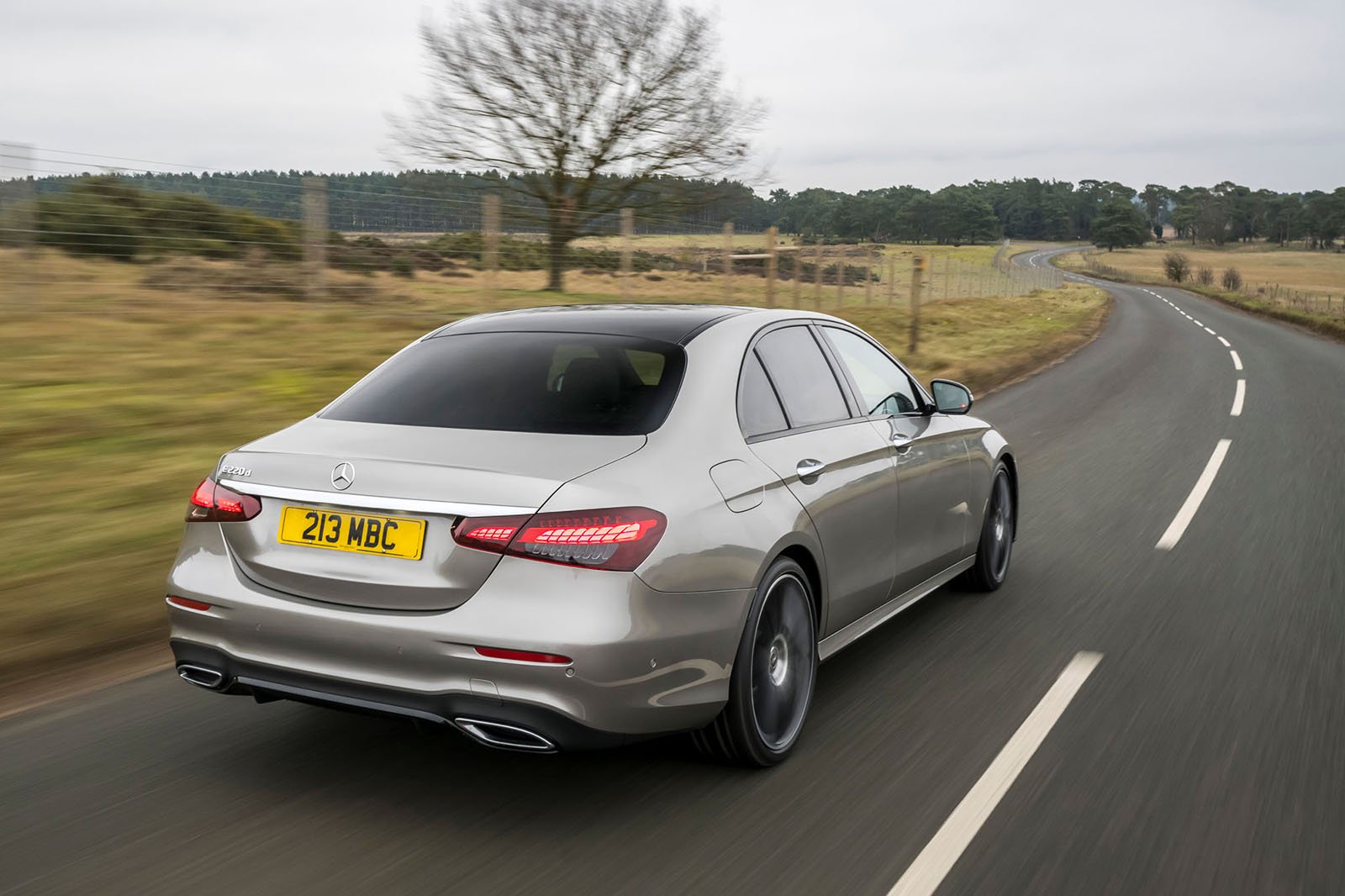 Most E-Class variants are tidy enough to drive, combining good grip and stability with light but accurate steering. However, the BMW 5 Series and Jaguar XF lean less in bends, while the XF also provides a greater sense of connection with the front wheels. As a result, both of these rivals are more agile and enjoyable to hustle down a country road.

Plug-in hybrid E-Classes lean over far more on their softer suspension than other models, making them feel cumbersome during quick cornering. Meanwhile, the AMG E53 offers a sportier feel, but still isn't as good to drive as the equivalent 5 Series, the M550i. On the other hand, the AMG E63 is very good indeed.

There's not much wind or road noise in the E-Class at 70mph, although cars with larger alloy wheels generate slightly more rumble, while specifying a panoramic glass roof causes a bit more wind whistle. It's also worth bearing in mind that the BMW 5 Series is even more impressive when it comes to high-speed quietness, partly because it has a lot less suspension noise – the E-Class clangs noticeably over patchy surfaces.

If you opt for one of the EQ Power plug-in hybrids, there's obviously no engine noise when running in electric mode. What's more, the E-Class's petrol and diesel engines are slightly quieter than the 5 Series'. However, the Audi A6's are quieter again.

Everything else about the E-Class encourages relaxed driving, including the progressive brakes. That applies to the regenerative ones fitted to the hybrid versions, although they’re not quite as good as the BMW 530e’s.