The Audi A6 Avant e-tron concept previews the brand's first fully electric estate, with a range of up to 435 miles and a 5-80% charge taking less than 25 minutes... If you want a zero-emissions car with serious load-lugging ability, there aren’t currently many alternatives to large electric SUVs. But Audi is looking to change that with the A6 Avant e-tron, a fully electric estate car to take on the Porsche Taycan Cross Turismo and Sport Turismo – the only premium electric wagons currently on sale. 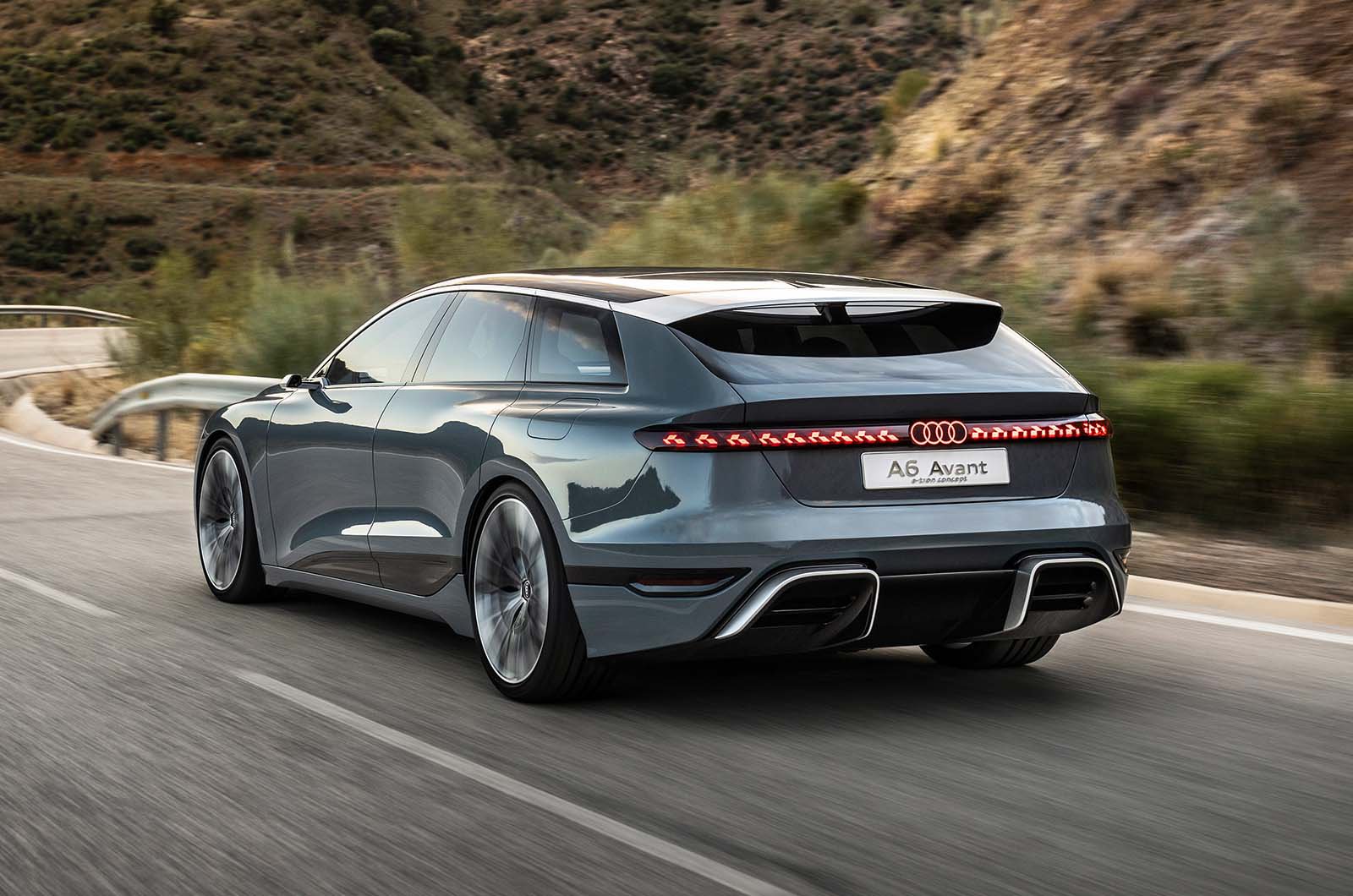 Following on from the five-door A6 Sportback e-tron concept that was unveiled last year, the A6 Avant e-tron is based on new-generation electric underpinnings that are being developed with Porsche. These new underpinnings will be shared not only with the production version of the A6 Sportback e-tron but also with the upcoming Q6 e-tron SUV and the next Porsche Macan, which will be fully electric too.

The A6 Avant e-tron is similar in length and width to the Taycan Sport Turismo but not quite as low-slung. Under the skin, it features a 100kWh battery – bigger than those found in the Taycan and all current electric Audis – plus front and rear electric motors, which deliver a total of 463bhp and 590lb ft of torque. 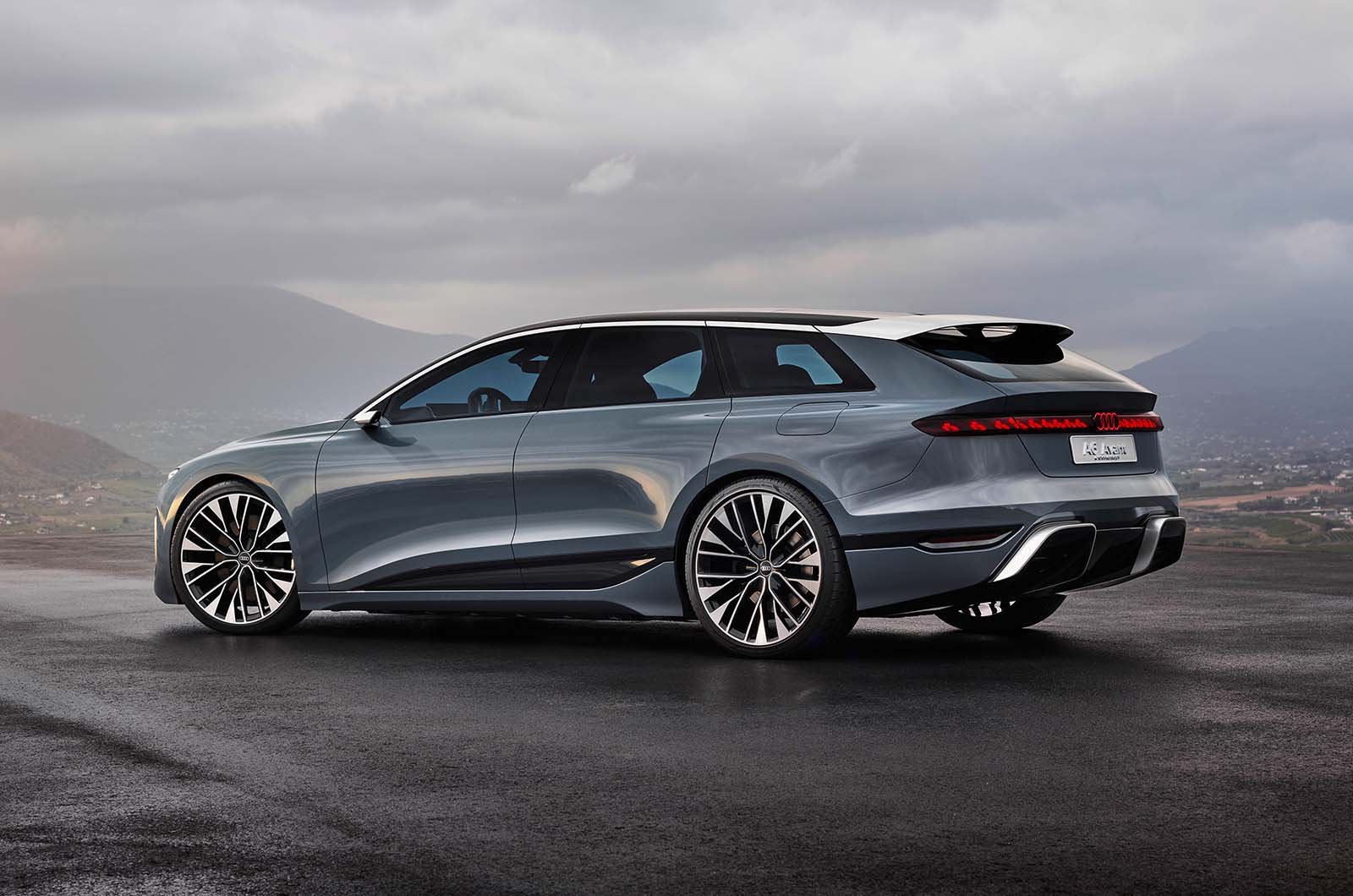 With the battery fully charged at the beginning of a journey, the A6 Avant e-tron promises a range of up to 435 miles – much farther than the equivalent Taycan Sport Turismo 4S (309 miles) can manage and slightly ahead of the upcoming Mercedes-Benz EQE saloon (410 miles).

A cheaper version of the A6 Avant e-tron is also expected to be offered with a single motor and a smaller battery with a capacity of around 70kWh. This version is likely to be able to cover around 300 miles between charges. 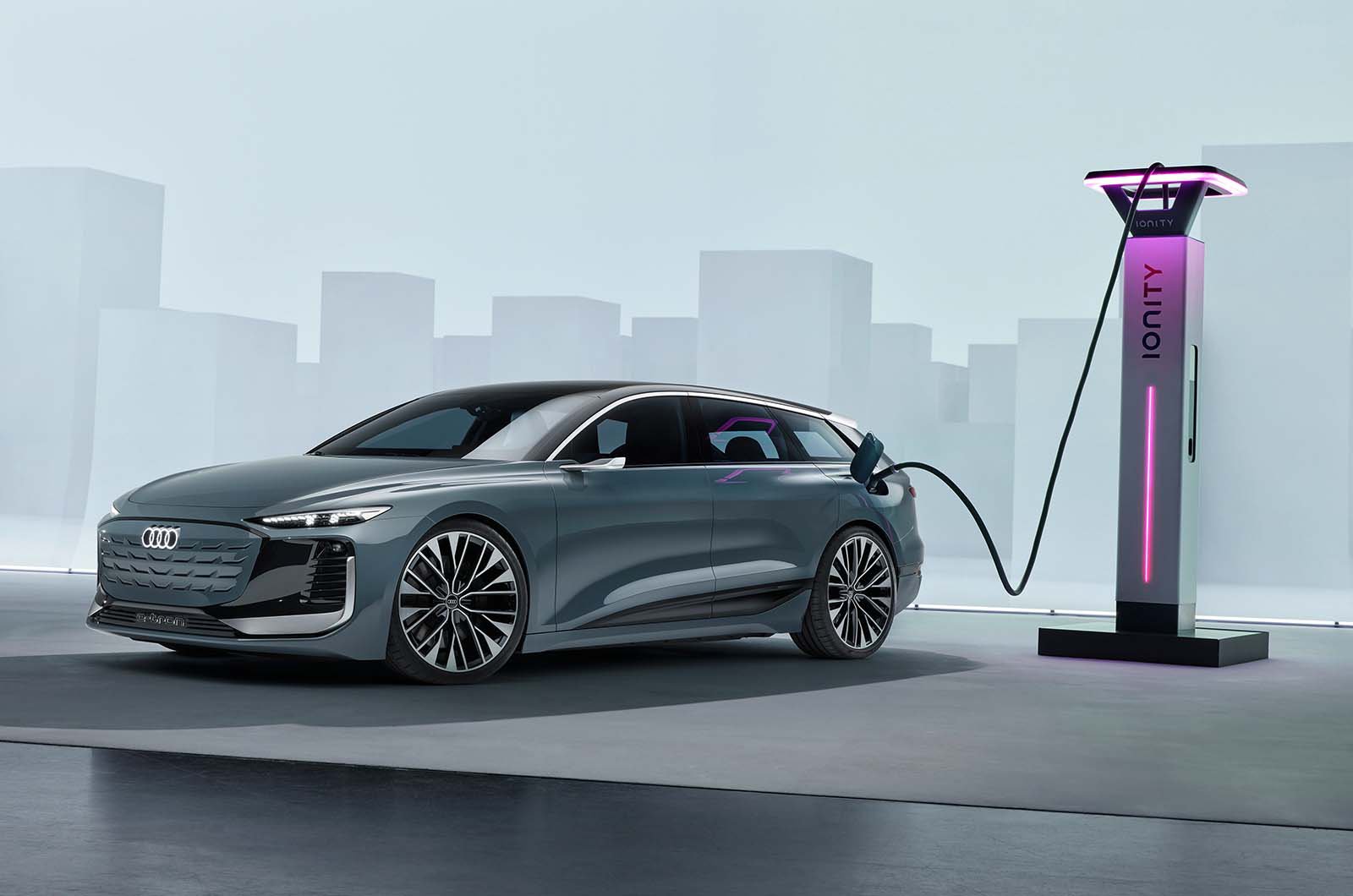 The A6 Avant e-tron features an 800-volt electrical system, which means that, as with the E-tron GT sports car and the Taycan, it can be charged ultra-swiftly, at rates of up to 270kW. A 5-80% charge can be achieved in around 25 minutes, while a 10-minute charge is said to add up to 186 miles of range if you can find a suitably powerful charging point.

A 0-62mph acceleration time of less than four seconds is on the cards for the dual-motor model, with the lower-powered single-motor version dispatching the same sprint in less than seven seconds. A high-performance RS model is also said to be on the way, as is a rugged Allroad version to compete directly with the higher-riding Taycan Cross Turismo. 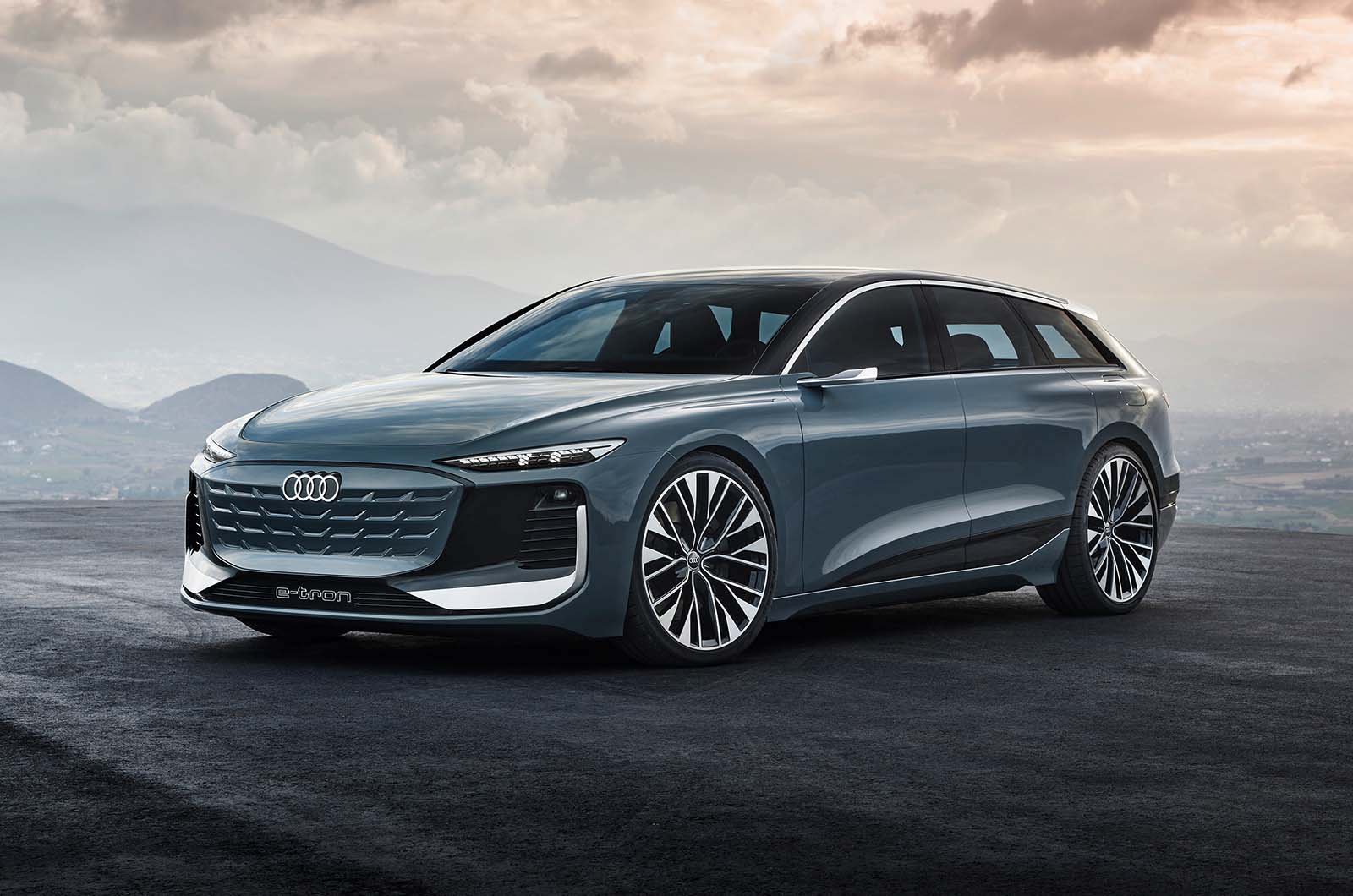 Like the E-tron GT, the A6 Avant e-tron features a blanked-off version of Audi’s signature grille, as well as adaptive LED headlights – which means they can automatically adjust their beams to avoid dazzling other drivers while maintaining maximum visibility.

What’s more, the concept’s headlights double as high-resolution digital projectors. This means that you can play video games or movies if you happen to be parked up against a wall at night when charging. It’s unlikely this feature will make it to the production car, though.

The current A6 Avant has a boot capacity of 565 litres with the seats raised and 1680 litres with the seats folded down. This is marginally smaller than what you get in the conventionally powered BMW 5 Series Touring and Mercedes E-Class Estate, but we can expect the A6 Avant e-tron to have a boot capacity in line with these cars. A front boot (or ‘frunk’) should also be offered to help increase the luggage capacity. 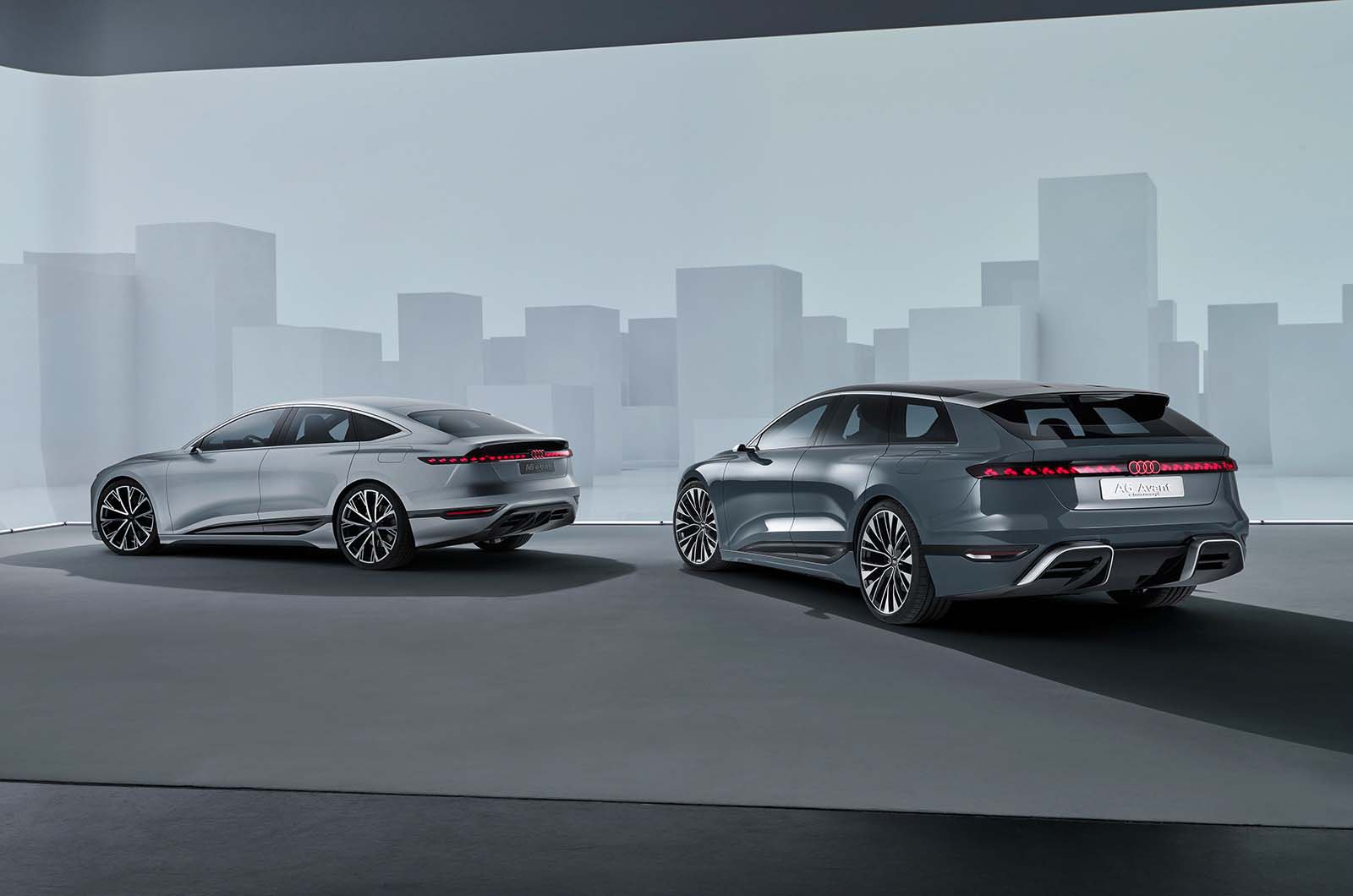 Audi plans to sell the A6 Avant e-tron and A6 Sportback e-tron alongside the regular petrol and diesel versions of the current A6, at least initially. The Avant e-tron is expected to be priced from around £60,000 – significantly more than today’s A6 Avant but quite a bit less than the cheapest Taycan Sport Turismo. Higher-powered versions will be priced from around £70,000, undercutting the Taycan Sport Turismo 4S by a substantial amount.