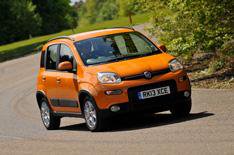 The Fiat Panda Trekking is designed to offer the looks and some of the off-road ability of the Panda 4x4, but for a lot less money.

Despite the absence of four-wheel drive, the Trekking will go places where a regular Panda would struggle thanks to improved ground clearance and a sophisticated traction control system, which is designed to improve front-end grip in slippery conditions.

However, can the Trekking really justify the extra 1200 it costs over the range-topping version of the regular Panda Twinair?

What's the 2013 Fiat Panda Trekking Twinair like to drive?
It's surprisingly easy to notice how the Trekking sits higher than a regular Panda, even though the difference is just 47mm. Throw the car at a corner at speed (not a pleasant act in itself, given how light and inconsistently weighted the steering is) and you'll notice a fair amount of body roll.

Still, around town the higher driving position gives a great view of the road ahead, and the core Panda qualities are as strong as ever. This is still a great car to drive around town, helped further by a revised suspension set-up that does a good job of ironing out suburban bumps and potholes.

The Trekking is surprisingly capable off the beaten track, too, as we found out when we tested it at Jeep's off-road facility in Italy earlier this year.

The two-cylinder Twinair petrol engine is as annoying as ever, though. It's pretty unrefined around town, with lots of vibration through the pedals and the driver's seat a trait that's even more noticeable if you shift up at the ludicrously low revs that the dashboard indicator suggests.

Whatever your driving technique, our previous True MPG tests with this engine indicate that you'll struggle to get anywhere near the official average economy figure of 61.4mpg.

There is an Eco mode that cuts the power and torque in the name of efficiency, but it blunts throttle response to the point where you'll end up being heavier on the throttle to maintain decent progress.

The only alternative to the Twinair, incidentally, is a diesel engine; Fiat doesn't sell either the Trekking or the 4x4 with its four-cylinder 1.2-litre petrol motor.

On motorways the Trekking gets blown around a bit more in blustery conditions, but at least the motor's thrum fades to a background grumble at speed.

What's the 2013 Fiat Panda Trekking Twinair like inside?
The Trekking's cabin is much the same as the regular Panda's, although it does get a slightly different finish to the fascia and different door linings (they look as if they've been designed to be wiped clean).

The rest of the interior is stock Panda fare, which means that it focuses on practicality over style, with lots of cubbyholes and enough space for four adults (though taller rear-seat occupants might complain about legroom).

The boot is smaller than those of the key rivals from the VW group VW Up, Seat Mii and Skoda Citigo but it's a decent shape nonetheless.

It gets the same standard kit list as the 4x4, but that doesn't exactly mean it's lavishly equipped. This is supposedly the range-topping spec, after all, yet you don't get electric rear windows.

Should I buy one?
If you really need some off-road ability from your city car (think about it carefully) then the Panda Trekking should be on your shortlist if only because there aren't many other options available to you.

After all, it's significantly cheaper than the Panda 4x4, and this two-cylinder Twinair model has all the performance you'll probably need, and costs less than the diesel variant.

It is worth remembering, though, that the cheapest four-wheel-drive Dacia Duster comes in at 1500 less than the Trekking and while it's not as well equipped, it has a much more spacious cabin and a bigger boot.

For most city car buyers, meanwhile, it's hard to recommend the Panda Trekking over the regular Panda, which can be had with the same engine and only slightly inferior kit levels for 1200 less.

The VW Up makes more sense still. You could have a five-door, range-topping version and still save 1000 over the Twinair Trekking. That's simply impossible to ignore.