All-new electric Fiat 500 will benefit from technical and styling updates and have a range of around 150 miles... 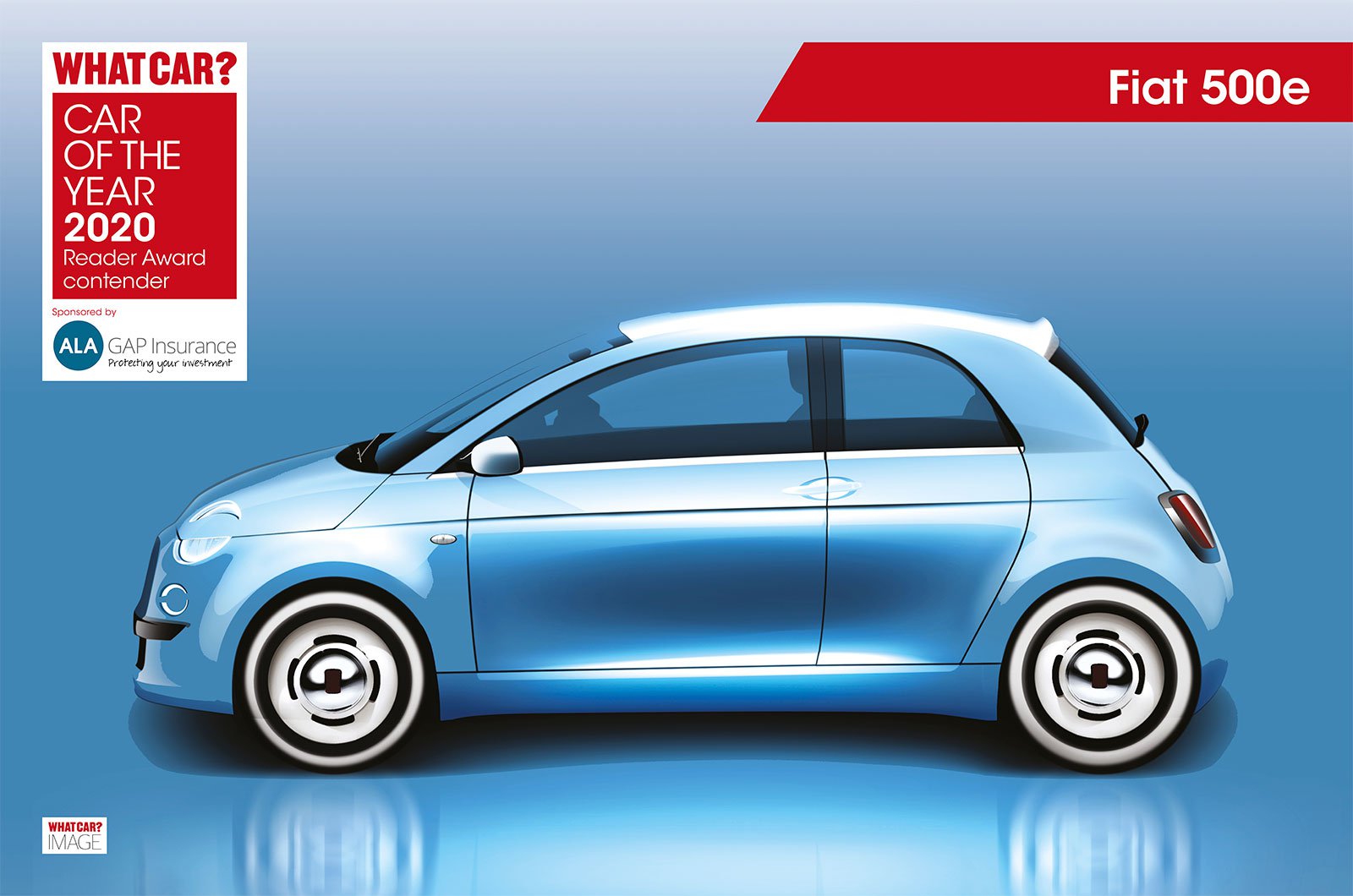 Fiat already dominates the city car market, with its 500 and Panda models accounting for a third of sales in Europe. And the 500 has been a staple of the Italian brand's line-up for more than a decade now, with more than two million examples produced during that time.

The aim with the all-new electric Fiat 500e is to consolidate that dominance and futureproof the cute city car so that it complies with current and future emissions restrictions. To that end, Fiat is investing heavily in its factory and a bespoke platform.

The first of a new generation of 500 models, the 500e will initially be sold alongside the current 500, which will continue to be powered by conventional petrol engines. Although it will be slightly bigger than the current 500, it will remain a city car and will look very similar from the outside. However, everything will be entirely new under the skin.

The new Fiat 500e is one of 12 cars nominated for the 2020 What Car? Reader Award. To see all of the contenders and have your say on which is most exciting, just head over to the voting site.

It won’t be short on rivals: the Seat Mii Electric has just gone on sale, just ahead of its Skoda Citigo-e iV and Volkswagen e-Up siblings, plus there's the Mini Electric and Honda E to consider.

The 500e is the first step in Fiat’s abandonment of diesel; by 2022, the brand will have eliminated this type of engine from its portfolio. The decision to start with the 500e is down to pricing: it’s a high-volume, relatively low-cost model. The 500e’s technology will be transferred to other Fiat, Alfa Romeo and Jeep models in the future.

Ahead of the 500e, a mild hybrid petrol 500 is due to be launched in late 2019 and an estate model, the Giardiniera, is also coming.

The 500e is being touted as an urban Tesla, so we can expect trendy styling inside and out.

Like other electric cars, the 500e is likely to have no front grille and, as a nod to the famous 500 of the 1950s, its front door handles will be sunk into the door under lines of chrome trim that stretch along either side of the body.

Although the family resemblance will be obvious, the 500e is expected to have sleeker, more aerodynamic styling than the regular 500, with deeper indents at the bottom of the door panels and a small rear spoiler. It's also expected to be around 30mm longer, enabling it to stay in the city car class but providing more room for rear occupants. The batteries will be under the floor, so there should be no compromise on interior space.

As well as the regular three-door version, there will be the option of a pair of rear-hinged rear doors to provide better access, enabling the 500e to compete on a level playing field with the BMW i3, Mini Electric and Honda E.

Little detail has been provided about the 500e’s electric motor, but we expect its battery give a range of around 150 miles between charges.

Although the minimal ranges of existing electric city cars, such as the Smart Fortwo EQ, were deemed too low, Fiat decided not to match the 250-mile real-world ranges of today's best mainstream electric cars, such as the Nissan Leaf, citing cost as a factor, as well as the fact that a city car doesn’t need such a long-range.

Tipped to embody la dolce vita in an electric car, the 500e has its sights set on the premium end of the market. It will be the polar opposite of the recent Centoventi concept, which will serve as the basis for the Panda’s replacement.

It’s no surprise, then, that Fiat acknowledges that the 500e will be pricier than the standard 500. Its thinking behind this lies in the fact that more than half of current 500 buyers don't buy entry-level models; instead, they typically pay around £20,000. It therefore reckons that a price of around £27,000 (before the UK Government's £3500 grant) shouldn't be too much of a stretch for them.

Best electric cars and the ones to avoid

If the idea of an electric version of the Fiat 500e has got you thinking about getting a greener car, then you'll want to know which are the best and which don't deserve a spot on your shortlist. With that in mind, then, below and on the next page you'll find our favourites, and the ones to steer clear of.