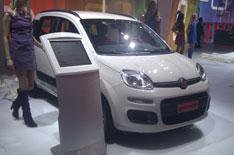 This is Fiat's next-generation Panda, which makes its public debut at the Frankfurt motor show.

The new model is 3.65m long, around 12cm longer than the outgoing model; it's also six centimetres wider, at 1.64m. It has 'softer' styling, but retains the Panda's distinctive, upright stance.

The cabin also has a curvier design - and more body-coloured trim - influenced by the interior of the 500, which shares many of the same underpinnings. There's also a deep dashboard pocket ahead of the passenger and a rear seat that folds and slides. Fiat claims the Panda can cope with five passengers - helped by new, thinner seatbacks that free up space.

The engine line-up will include a pair of two-cylinder petrol units (a 64bhp motor and a turbocharged 84bhp version), and a 1.3-litre, four-cylinder 74bhp diesel. All of these engines get stop-start as standard; the remaining option, a 68bhp, 1.2-litre petrol, does not.

There's no word yet on a successor to the 100HP performance model, but it's likely. An automatic option, linked to the two-cylinder engines, will arrive soon after launch. Fiat has confirmed that a four-wheel-drive variant is planned

Safety kit has been increased, with four airbags, front seatbelt pre-tensioners and daytime running lights as standard. Also due, within a year of the Panda's launch, is a system that detects obstacles at speeds of up to 20mph and slows the car automatically.

The car will be built at Fiat's Pomigliano factory in Naples from late autumn, taking Panda production away from the Polish plant that builds the 500. It's due to go on sale in the UK in spring 2012. We'd expect pricing to stick closely to the outgoing car's, so the range should start from around 8500.