10. Skoda Kamiq with 9.2in touchscreen, voice control and Amundsen sat-nav 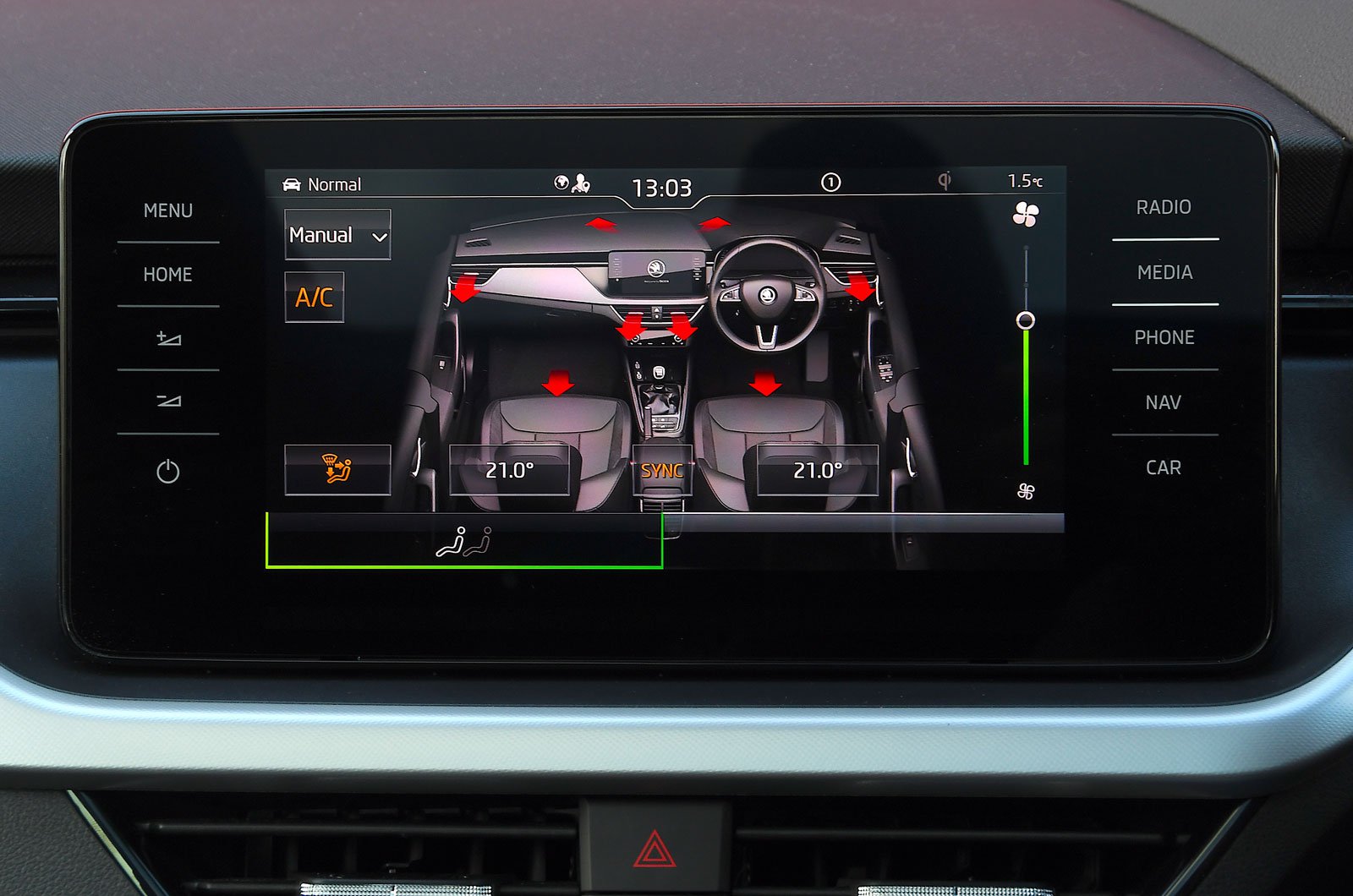 Sharp graphics make the screen easy to read at a glance, and there are large, physical buttons to access the sat-nav. The screen could be more responsive when you’re using your fingers to zoom the map, but you can also do this via the steering wheel controls, and guidance can be ended by pressing just one icon.

To change radio stations on the main list, you have to scroll through them, but there’s a scrollbar at the side that speeds this up and, as in most cars, setting up favourites makes things easy.

The voice control system works pretty well, taking just two steps to find the nearest fuel stations. However, you have to select the station you want from an onscreen list and then press
‘go’ to start the guidance.

The temperature is controlled by a dial, but you need to use the touchscreen to adjust the fan; that’s more distracting.

Save money on a Skoda Kamiq with What Car? >> 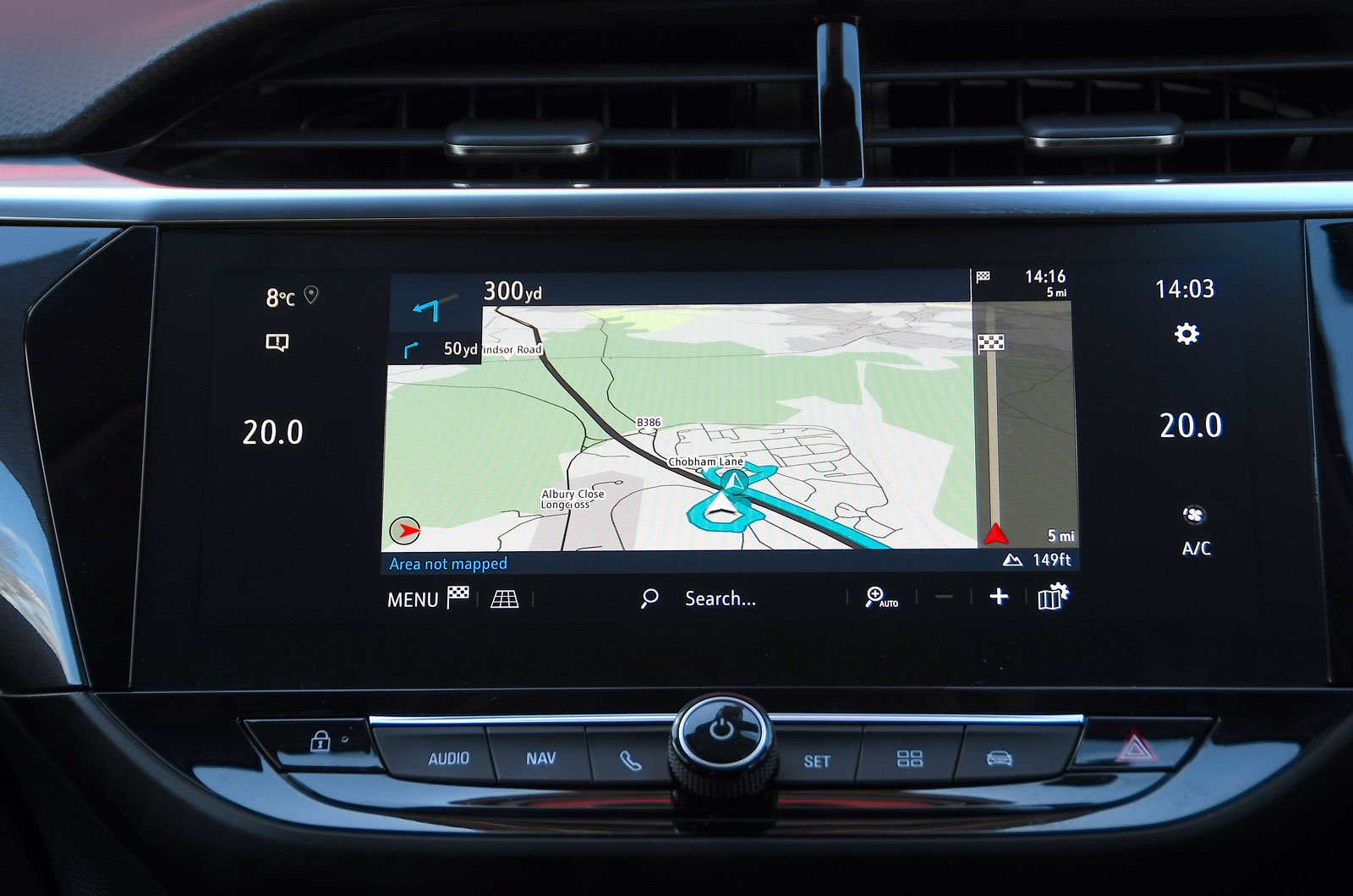 While the Corsa’s infotainment software is very similar to the related Peugeot 508’s, you get conventional buttons for switching between menus, and these are more user-friendly than the 508’s ‘piano keys’. In addition, you get separate buttons and knobs to adjust the temperature and fan speed, making these tasks quicker and less distracting. Cancelling guidance is a fairly simple two-step process, but the Corsa is also like the 508 in that the map won’t zoom out enough to see the whole route.

Scrolling down the alphabetical list of radio stations can be frustrating, because the system is a bit laggy. However, you can access favourites quickly via the steering wheel controls.

The voice control is good at understanding an initial request to find nearby service stations, but it only found one and didn’t resize the map to show it.

Save money on a Vauxhall Corsa with What Car? >>

8. Hyundai Ioniq with 10.25in touchscreen and Bluelink connectivity 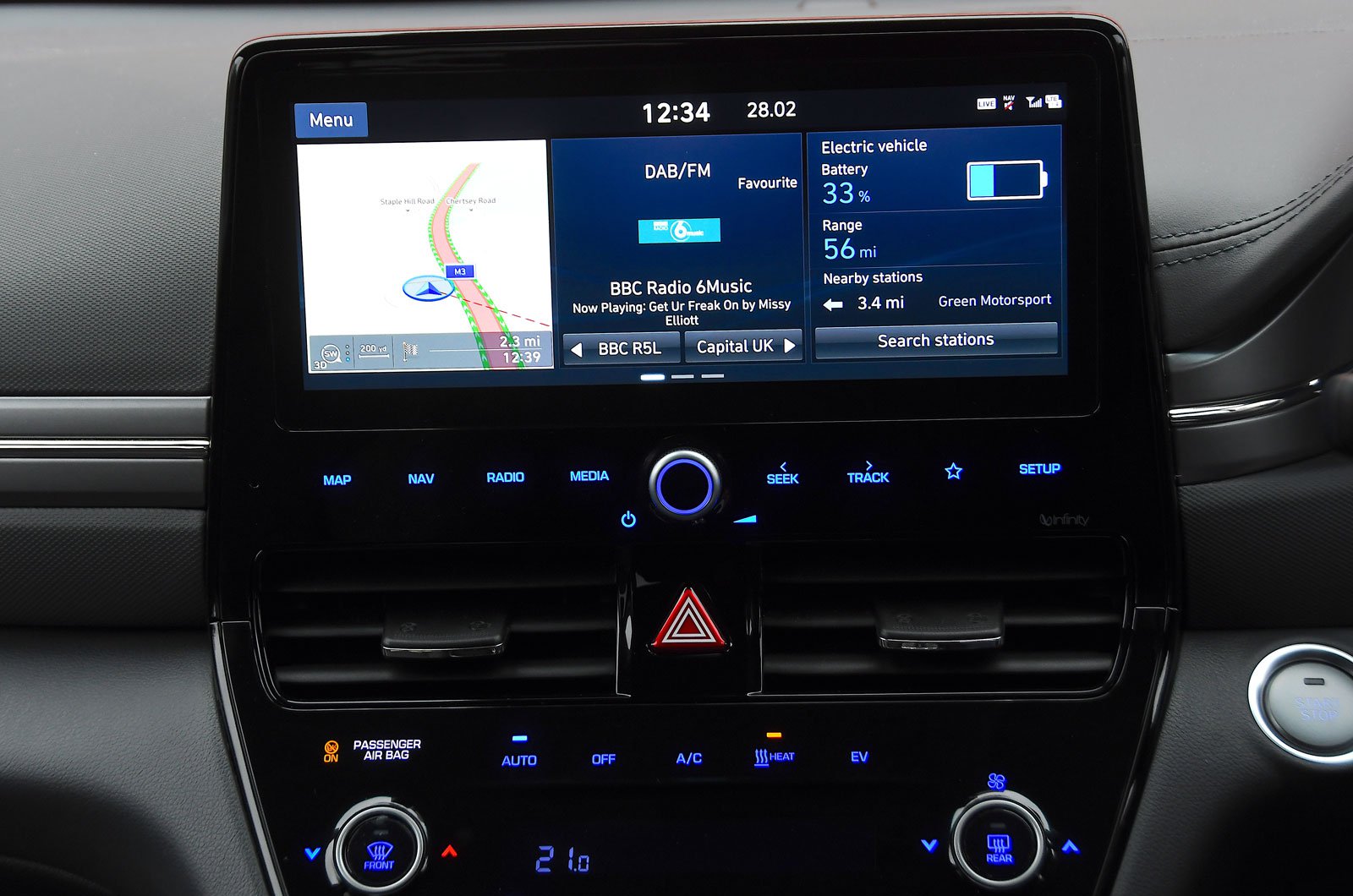 You need to use the touchscreen to zoom in and out of the sat-nav map, but it’s responsive enough to minimise distraction, while ending route guidance involves just two steps on the screen.

Similarly, the only way to scroll through radio stations is via the screen, but you can move through the list swiftly without it glitching. Set your favourites and you can also scroll between these using the steering wheel controls.

The ‘buttons’ for adjusting the temperature and fan speed are actually touch-sensitive areas of the dashboard rather than proper buttons you depress, so you still need to look at them, but they aren’t overly distracting.

The voice control system understands the command to find the nearest service station, provides a list and asks you to say the number of the one you want to navigate to.

Save money on a Hyundai Ioniq with What Car? >> 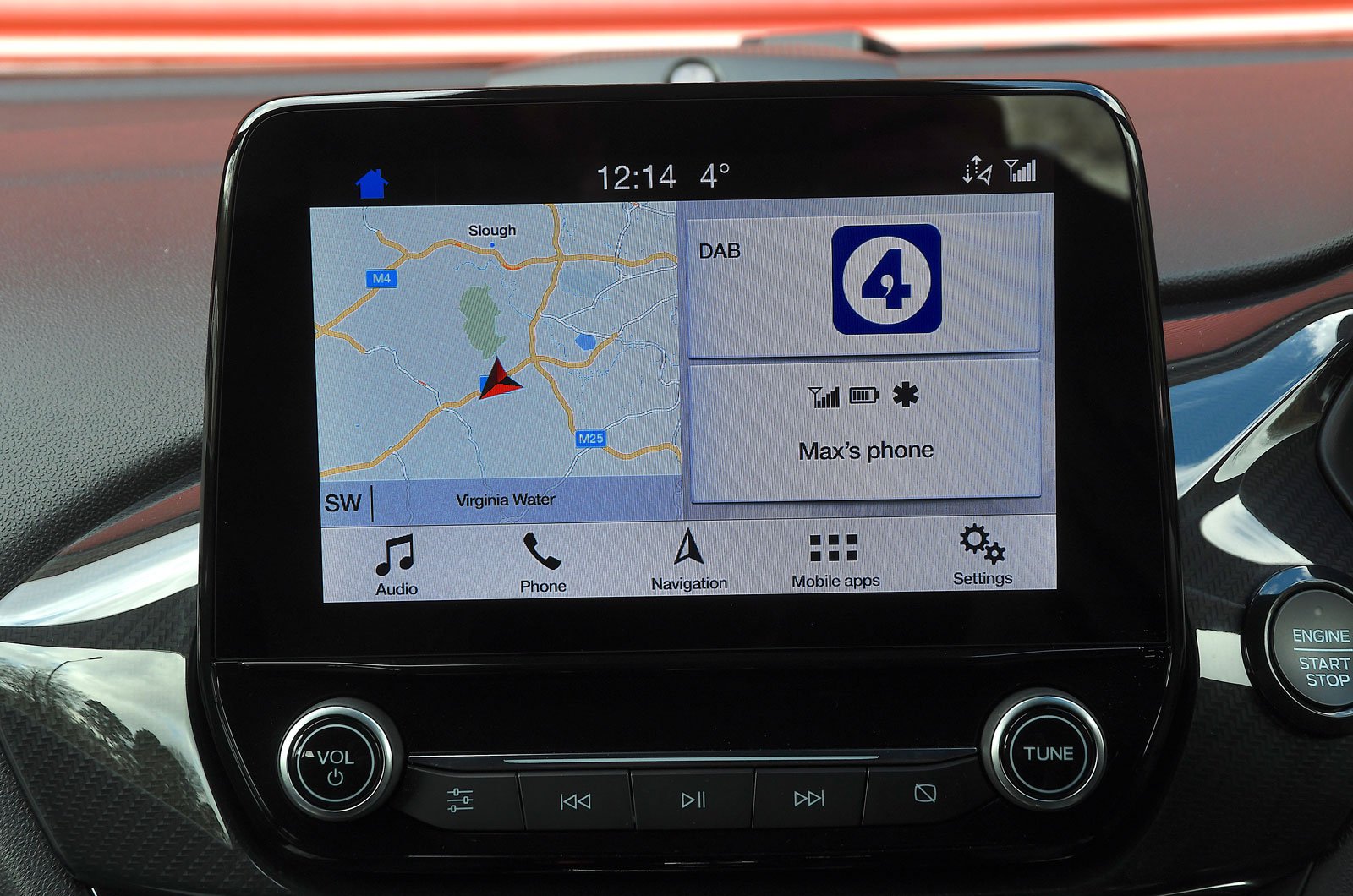 The Fiesta has chunky dials for adjusting the air-con temperature and fan, while its touchscreen infotainment system has large, clear icons that are easy to see. It’s also fairly easy to zoom out on the map using on-screen icons or your fingers, because the screen is reasonably responsive.

Cancelling the guidance via the screen takes just two steps, or you can do it via the steering wheel; this takes longer, but you look at menus in the instrument panel, so your eyes aren’t so far from the road. The radio stations are grouped in ensembles and it’s time consuming to scroll through them, although this is much easier once you’ve added favourites, and you can switch between them using the steering wheel controls.

Save money on a Ford Fiesta with What Car? >> 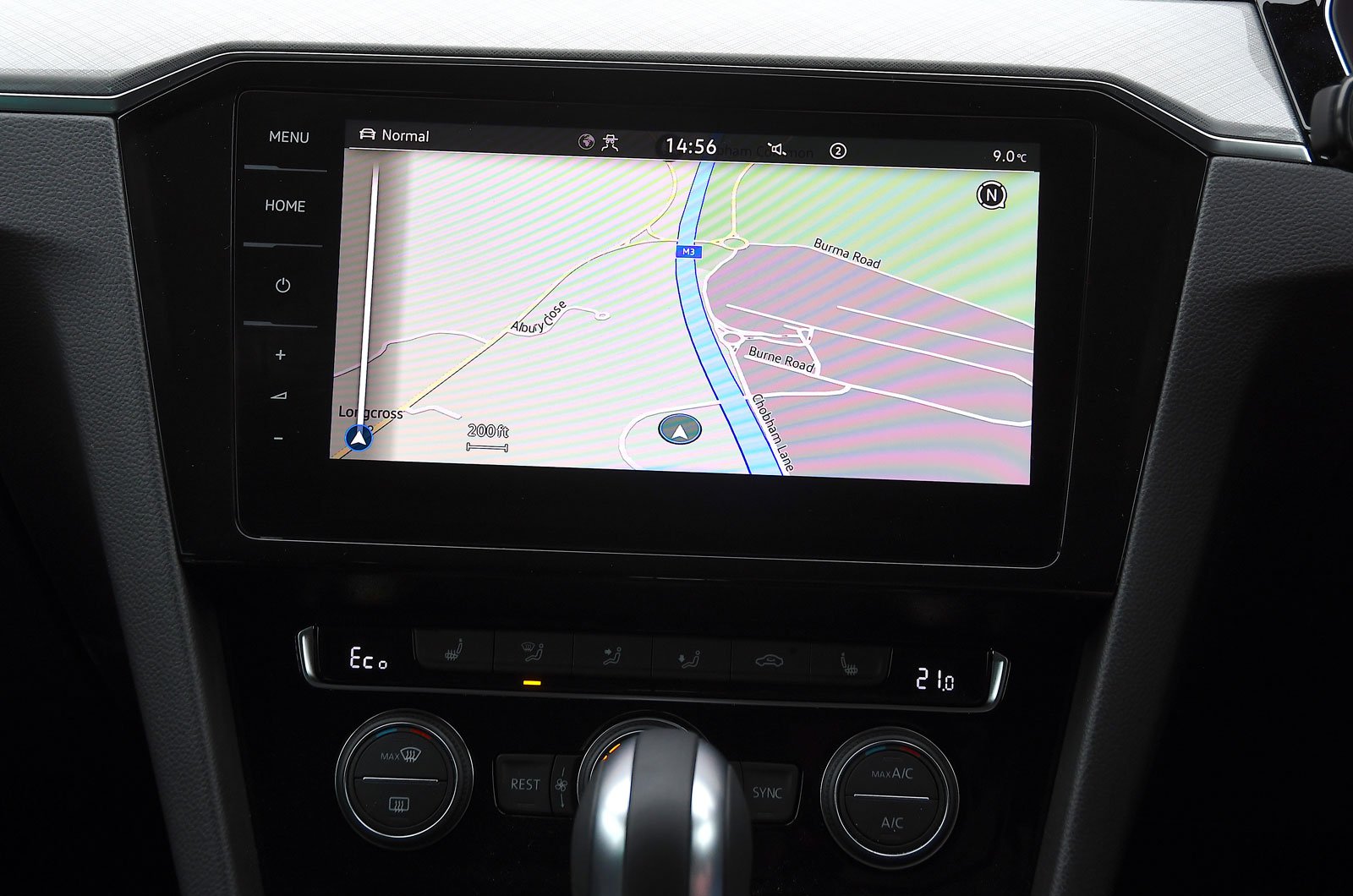 This system looks similar to the one in the Skoda Kamiq (which is from the same group), but it has some different features that make it easier to use.

For a start, you control the fan speed via a dial rather than through the touchscreen. And the voice control system – which understands different ways of saying commands – quickly provides a list of fuel stations, which you can then select verbally instead of having to use the screen.

Ending guidance does require two taps of the screen rather than the one of the Kamiq, but the Passat is still better overall.

The radio stations on the main list are in alphabetical order and it takes a long time to scroll through them, while doing it via the steering wheel takes even longer, so it’s definitely worth setting up favourites.

Save money on a Volkswagen Passat with What Car? >>

<< Previous | Next: The least distracting systems >>