The first question to ask yourself when buying a Macan is whether the 3.0-litre V6 turbocharged S model is worth the premium over the entry-level, four-cylinder 2.0-litre turbo? And the short answer is yes, absolutely. Not only does it produce an extra 108bhp and slice 1.4sec off the 0-62mph time (to 5.3sec), it also feels a lot more muscular from low revs.

The GTS uses a 2.9-litre, twin-turbo V6 engine that provides an added 26bhp and revs out with even more enthusiasm; but, ultimately, isn't that much faster. So if speed is your need, you might want to consider the range-topping Turbo model instead. It’s certainly rapid, its 434bhp catapulting you from 0-62mph in just 4.5sec, although we’d point out that the Alfa Romeo Stelvio Quadrifoglio and Mercedes-AMG GLC 63 are faster still. In fact, we’d suggest the Macan S is the sweet spot of the range, proving more than quick enough to have fun.

Whichever engine you choose, a quick-acting seven-speed automatic gearbox is standard, although you can take manual control via the steering wheel-mounted paddles.

The Macan is distinctly sports-oriented and, on its standard springs, feels firmer than the best-riding SUVs, such as the Audi Q5. Even so, it’s compliant enough for everyday use, especially if you avoid ticking the box for the bigger, optional alloy wheels. You can upgrade to Porsche Active Suspension Management (PASM) – an adaptive set-up that allows you to vary the suspension's stiffness – and this is worth thinking about if you want a more rounded ride and handling balance.

The ride is improved further if you add the pricier air suspension, and we recommend that you do. With this fitted, you'll still feel a little jiggled about on scruffy town roads, but it isolates you from anything jarring and controls body movements at speed over undulating A-roads and motorways better than the regular PASM setup.

GTS and Turbo models come with adaptive PASM as standard and still offer the option of air suspension. In both instances the setup is lower and stiffer, so ride comfort takes a small hit. 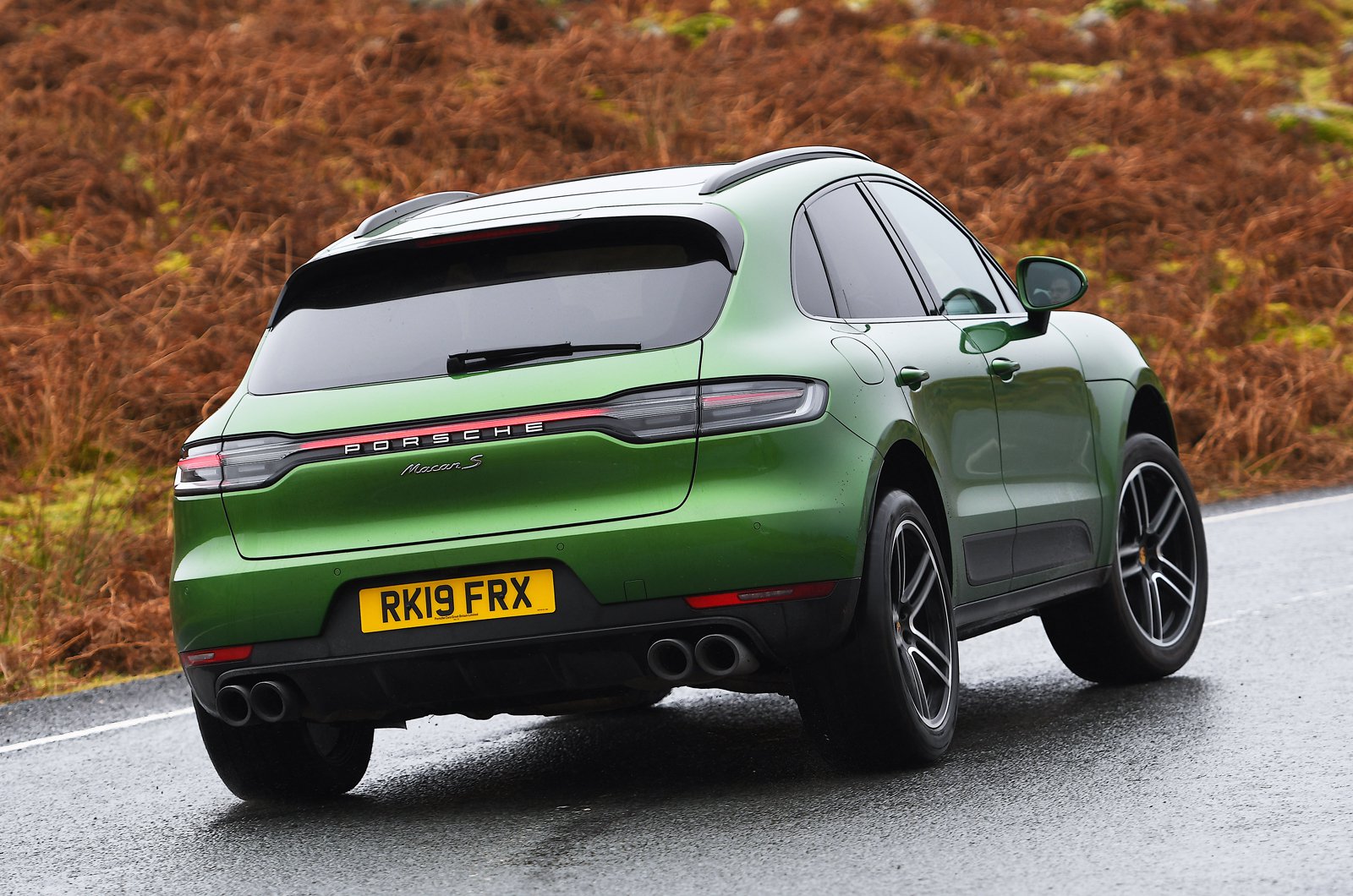 Every Macan has a Sport button that sharpens its steering, gearchange, accelerator response and – if you’ve specified air suspension or PASM adaptive dampers – its suspension. With Sport mode engaged, the Macan is one of the most entertaining SUVs you can buy.

Even when judged against other sharp-handling models, such as the Jaguar F-Pace, the Macan shines, thanks to confidence-inspiring steering that's beautifully weighted and precise, and minimal body lean for an SUV, especially on air suspension. Yes, the Audi SQ5 has more front end grip, but you’re much more aware of the rear axle receiving power when exiting corners in the Macan, and that makes it feel more fun.

For those who plan to take their Macan off the beaten track, there's an Off-Road button as standard. This adjusts the traction control settings and gearbox (and sets the air suspension to its highest ride height, if fitted) for optimal off-road handling. Hill descent control is also standard, so the car will maintain a steady speed down steep, muddy hills. Don't expect it to be as gifted as a Land Rover Discovery Sport off road, though.

For all its sportiness, the Macan is a pretty relaxing cruiser when you need it to be; its engines are hushed on the motorway and wind noise is well suppressed. That said, there is noticeable tyre roar at higher speeds, and over certain road surfaces you’ll hear some suspension noise, too.

On the open road, the seven-speed dual-clutch automatic gearbox is very slick, delivering near-imperceptible changes at precisely the right moment, although it can be a bit jerky at parking speeds. The well-judged brake pedal also helps make the Macan easy to drive smoothly and contributes to its upmarket feel.

At higher revs, the V6 engines of the S, GTS and Turbo models sound much more appealing than the entry-level model’s four-cylinder 2.0-litre engine, especially if you also specify the optional sports exhaust, which the GTS gets as standard.