Finding a comfortable driving position in the Model S is mostly easy. The pedals are well set, in line with the seat and steering wheel, and the seat and steering wheel move electrically. There are some issues to point out: the lumbar adjustment isn't that comfortable – it feels like a little anvil being squeezed gently into the small of your back – and there isn't a lot of side support to prop you up through corners. We prefer the seats you get in a Jaguar I-Pace or Porsche Taycan for overall comfort.

Unlike the smaller Tesla Model 3, the Model S has its instrumentation directly in front of you on a digital screen, instead of all clumped into its central touchscreen. That’s good, because you can read your speed or the remaining range easily, but you still have to delve into the main touchscreen to operate most functions. Even the sunroof is opened and closed from there, which is more distracting than having a traditional button.

Forward visibility is decent, but the chunky windscreen and side pillars can get in your way when you're looking left and right at a T-junction. The view rearwards is also restricted due to a acute angle of the rear screen and thick rear pillars.

Still, help is on hand in the form of standard front and rear parking sensors and a rear-view camera. However, the fact that Tesla doesn't offer a 360deg parking camera, even as an option, seems odd, because there are cameras dotted all around the car for the Autopilot system to use.

LED headlights are standard, but you can't have fancy adaptive Matrix LED headlights that can remain on main beam without blinding other road users – a helpful feature that's fitted to some rivals, . 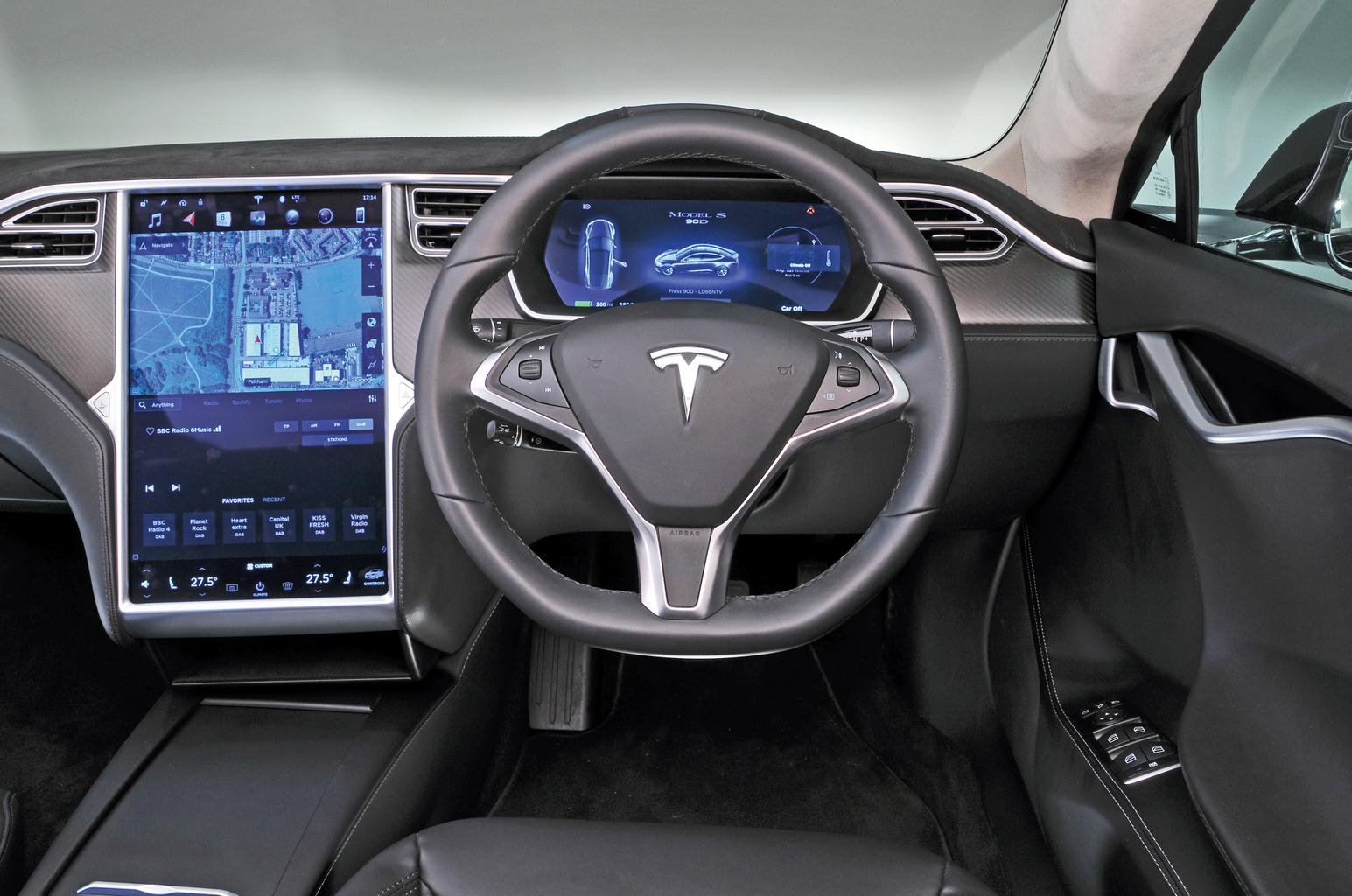 There are hardly any switches or buttons in the Tesla Model S. Instead, you get a massive 17.0in colour touchscreen that has sharp, high-definition graphics and online connected services.

That might sound overwhelming, and, generally we'd prefer a solution like BMW's iDrive with a rotary controller, but, if you're going to have a touchscreen, it's better to go big. It's actually friendlier to use than some rivals' systems, like the Porsche Taycan's with its smaller, fiddlier screens. Shortcuts for key systems, such as sat-nav and media, are always on display, and you can have multiple menus up at the same time. You scroll, pinch and swipe like a tablet, and the software is very slick.

The system also has Google Maps, Netflix, web browsing and even computer games loaded in. You cannot have Apple CarPlay and Android Auto smartphone mirroring, so you might miss some of that functionality if you've grown used to having it, but wireless charging is included and software updates and new features arrive over Wi-Fi, rather than having to visit a dealership. The worst bit is the voice activation, which seems to have the level of English of the average five-year old.

The interior of the Model S offers plenty of wow factor, thanks to its minimalist, sci-fi look, but the materials feel flimsier than you might expect for a car in this price bracket. The 'vegan leather' isn't as plush as natural hide, the panel gaps are all over the place, and there are some bits, like the centre console, that could use a few more screws to sure them up.

Most of the Tesla Model S's rivals, including the Audi e-tron, I-Pace and Taycan, are significantly nicer and more becoming of their premium price tags. Even Tesla’s own Model 3 feels more upmarket, despite being significantly cheaper.