The 1.0-litre three-cylinder entry-level engine’s 118bhp power output may sound paltry for a small SUV, but don’t forget that the Kona has a smaller footprint than a Volkswagen Golf. As a result, even this smallest engine proves more than sufficient in most driving situations and is our pick of the fossil-fuelled Konas.

Its outright acceleration is more than acceptable (0-60mph took 10.4sec in our tests) and, thanks to relatively short gearing, the Kona even picks up speed reasonably swiftly when you accelerate from low revs in higher gears. The standard-fit manual gearbox has a somewhat long throw, but it feels precise enough not to become annoying.

There's also a 175bhp 1.6-litre turbocharged petrol with a seven-speed automatic gearbox and four-wheel drive – something of a rarity in an SUV of this size. This version can officially dispatch the 0-62mph sprint in less than eight seconds, its extra power making it ideal if you frequently carry a full load of passengers or luggage. It's too pricey to be our pick, though.

The Hybrid version is powered by a 104bhp 1.6-litre petrol engine paired with a 43bhp electric motor, giving it a claimed 0-62mph time of 11.2 seconds. That might sound a bit slow – especially in light of the performance the 1.0-litre petrol engine can offer – but it has enough poke in the real world.

The boost from its electric motor is readily available from a standstill, so the Kona Hybrid feels quicker than it actually is, and you can drive it silently on electric power alone at city speeds. Head out of town and the petrol engine joins in smoothy and takes you to motorway speeds with no real effort, but the hybrid is no match for the Kona Electric for sheer performance.

The Kona's ride is on the firm side and can’t match rivals such as the Seat Arona and Volkswagen T-Roc for comfort over bumps. It jolts more violently over potholes and expansion joints, and is more jittery along scruffy town roads. There are less comfortable small SUVs (the Nissan Juke and Citroën C3 Aircross, for example), though, so the Kona is simply average for the class.

Stick with 16in or 17in wheels to keep things more comfortable; the 18in alloy wheels that come as standard on Premium trim and above make bumps more noticeable as they pass beneath the tyres. 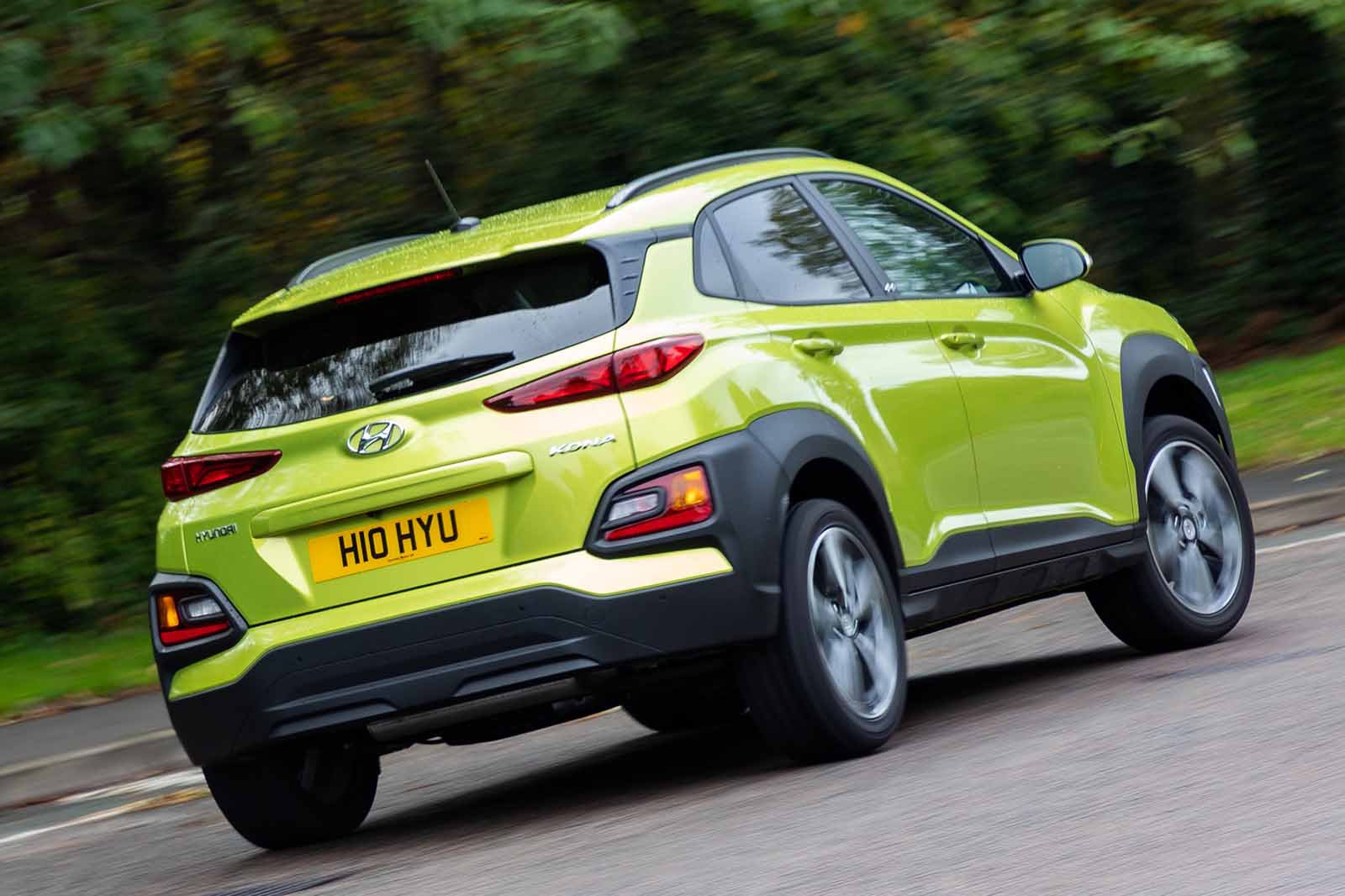 Compared with most of its direct rivals, such as the C3 Aircross and Renault Captur, the Kona changes direction remarkably smartly, gripping well and staying upright even through tight twists and turns.

When it comes down to it, there’s no cheating physics and no Kona handles as well as the best conventional hatchbacks. Its taller body inevitably leans more through faster corners – particularly with the extra weight of the hybrid's batteries – and it never feels quite as agile as a Ford Fiesta or Seat Ibiza.

As small SUVs go, you’ll better enjoy the experience of threading your way along a country road in the Seat Arona; its steering is more precise and makes it easier to judge where you’re placing the car on the road.

The Kona isn't the quietest small SUV in the world. Its three-cylinder 1.0-litre engine makes a bit of a din, even when not being worked hard, and you’ll feel some vibration through the soles of your feet. The 1.6-litre is smoother, but doesn't sound particularly tuneful and becomes quite boomy when revved hard.

At motorway speeds, the Kona also generates more wind and road noise than the best small SUVs, including the Volkswagen T-Roc. The gearshift isn't bad, although there isn’t the positive snick you experience in an Arona as you shift from one cog to another. The automatic gearbox is good unit and rarely frustrates, changing gears swiftly without fuss. Meanwhile, you might find the brake pedal a bit spongy and slow to respond.

The Kona Hybrid can amble along quietly on electric power alone with just a slight whine from its motor, but only if you’re gentle with the accelerator. Be more forceful and the petrol engine sounds a little strained when it kicks in, while background noise is naturally more noticeable when the car is running solely on electricity.

Roomy for its size and good to drive