The Mercedes S-Class gets an electrically adjustable driver’s seat as standard (including four-way lumbar adjustment) and a steering wheel that powers in and out, as well as up and down. Handily, both the seat and wheel have memory functions. The seat is also wonderfully cushioning and extremely supportive, so it's really easy for you – or your driver – to get comfortable. While you're driving along, weary arms will find sanctuary resting on the perfectly positioned centre and door armrests.

The 12.3in digital instrument panel is clear, easy to read and able to show a wide variety of information. That is, unless you select the 3D mode that's available with AMG Line Premium trim; this can make you a bit cross-eyed. The display, and any other features operated from the steering wheel, can be tricky to use, because the controls are touch-sensitive. It’s far too easy to accidentally operate something when you’re twirling the wheel. Premium Plus trims add a clear head-up display, so you can check your speed and other information without taking your eyes off the road.

You’ll need to use the giant central touchscreen (we’ll talk about this more in the infotainment section) to operate everything else, including the temperature controls. Although it’s handy that the temperature adjustment icons are always displayed, you do have to look away from the road to find them. The BMW 7 Series, which has physical controls, is much more user-friendly.

There’s sufficient all-round visibility to make this behemoth of a car less daunting to drive than you might expect. It helps that even the entry-level AMG Line trim gets front and rear parking sensors plus a rear-view camera as standard. Semi-autonomous parking and a 360-degree camera are standard on all other trim levels.

Another bonus is the super-bright adaptive LED headlights, with main beams that can stay on without blinding other drivers. They are standard until AMG Line Premium Plus trim, which swaps them for Ultra Range LED lights with a maximum range of 650 metres; that's a truly illuminating fact for you. 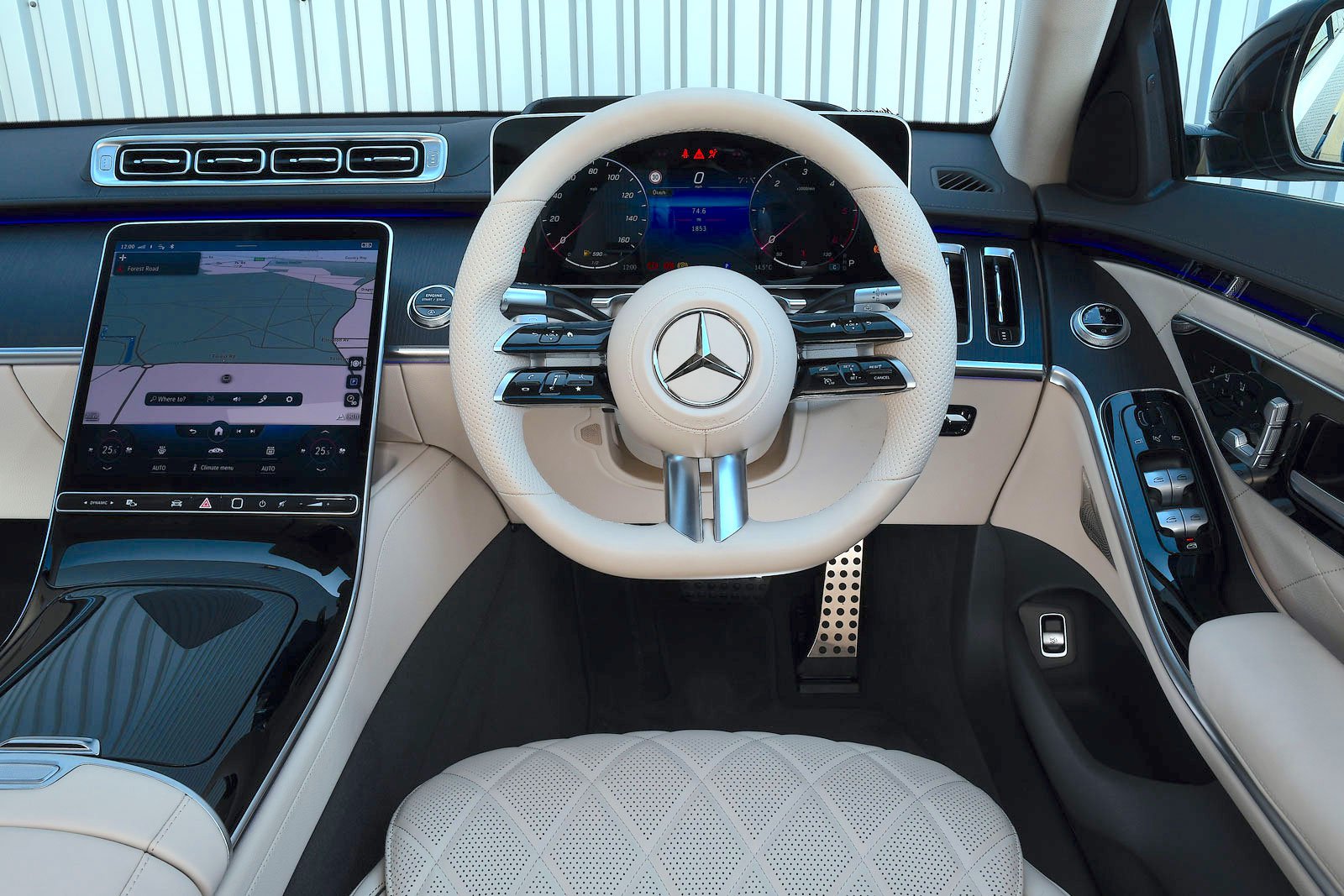 All trims get the giant portrait-orientated touchscreen, which is angled upwards to make it easy to see and use. The infotainment system includes augmented sat-nav (showing direction arrows on a live camera feed), wireless mobile phone charging (including in the rear on upper trims), eight USB-C ports and Apple CarPlay/Android Auto phone mirroring. With the top trim, you also get a removable 7.0in tablet in the rear armrest.

The graphics are sharp and the system is generally responsive to your commands, apart from being a bit clunky if you're scrolling through lists. The menus are easy enough to get used to after a bit of practice. The 'Hey Mercedes' natural voice recognition will operate a multitude of functions, but not all of the time; as with all voice activation systems, it's imperfect. It may feel antiquated, but the 7 Series' rotary controller between the front seats is by far the easiest way to use complicated infotainment systems safely while driving.

You can store a number of driver profiles that retrieve your preferred settings. These are recalled using a PIN code, the fingerprint pad or facial recognition. Even the entry-level S-Class gets a nine-speaker stereo, with AMG Line Premium trim upgrading that to a 15-speaker, 710-watt Burmester system. It sounds punchy and clear, if a little harsh in the mid-range.

The quality of the S-Class interior is impressive (and improved over the previous model), with rich materials, including supple nappa leather, real wood veneers, metal inserts and squishy plastics. What few buttons and switches there are work precisely, and the steering column stalks feel sturdy.

It’s certainly closer than ever to the 'hewn from solid rock' feel of the Audi A8, although its arch-rival still has an edge. There’s no doubt that the S-Class wins on razzamatazz, though. The glitzy, 64-colour ambient lighting, which runs across the tops of the doors and the dashboard, single-handedly sees to that.