* New technologies and innovations * Targets Audi A8 and Range Rover buyers * Get all the details here... 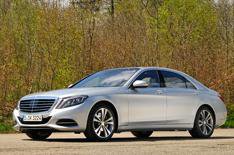 This is the new Mercedes S-Class, an all-new generation of the luxury car that aims to use a string of new technologies and innovations to attract buyers back from rivals such the Audi A8 and Range Rover.

To succeed, the new S-Class will have to offer fresh levels of cabin luxury, comfort and connectivity that appeal to not just European and American buyers, but also customers in huge new markets such as China.

The new S-Class is larger than the previous model but not by much. Indeed, both of the wheelbases on offer are the same as before at 3035mm and 3165mm but larger overhangs increase the overall length of the cars to 5116mm (an increase of 40mm) and 5248mm (up by 42mm). The car's track is also slightly wider.

Its front-end styling is a clear evolution of what's gone before, albeit with a new grille and a complex headlight design. Mercedes' three-pointed star is still present at the front edge of the bonnet, even though it has been dropped from smaller models such as the A-Class and even the latest E-Class.

The new car's biggest innovation could be its suspension system. Called Magic Body Control, and available as an option on V8 models only, it uses a stereo camera mounted at the top of the windscreen to 'read' the road ahead and prepare the S-Class's air suspension system for the bumps and potholes that it's about to hit. The cameras also form part of a 360-degree parking assist system and help the Brake Assist system to detect crossing traffic and pedestrians, and boost braking power accordingly.

What's the 2013 Mercedes S-Class like inside?
The front cabin builds on the sophisticated, classy look of the current car, with huge swathes of double-stitched leather and high-quality metal finishes. The top of the fascia is dominated by two large widescreen displays, with one showing the main instruments to the driver, and the central screen switching between sat-nav, vehicle settings and infotainment. It can also show different media to either side of the cabin, allowing the driver to see a map while the passenger watches a DVD. The latest generation of Mercedes' Comand infotainment system is standard, and it offers an integrated wireless internet hotspot.

The new S-Class has a little more space inside than the outgoing model. The driver gets an extra 12mm of headroom, and front passengers get an extra 14mm of shoulder-room and 10mm more elbow-room. Rear occupants get 14mm more room for their knees and up to nine millimetres more shoulder-room.

The standard configuration of the rear cabin will be three regular seats, but this can be radically altered by various options. The 'First Class Rear' switches the layout to two seats and offers a control console in the centre that's equipped with cup-holders, which can cool or warm drinks over a longer period of time. The console can also be specced with a pair of tables that fold out, like in an aircraft. Both rear seats can recline and there's also a 'Chauffeur package' that moves the front seat and folds out a footrest to allow one rear passenger even greater comfort.

All of the seats can be specified with heaters, coolers, and heated motors that are designed to replicate a 'hot stone' massage. The rear cabin gets airbags incorporated into the seatbelts.

Other interior options include an adjustable fragrance system, heated front and rear armrests, and a range of audio upgrades with up to 24 speakers from specialist manufacturer Burmester.

What engines are available with the 2013 Mercedes S-Class?
The S-Class will have three engine configurations when it arrives in the autumn. The most popular UK choice will be the S350 Bluetec, which has a 3.0-litre V6 turbodiesel engine producing 255bhp and 457lb ft. It can reach 62mph in 6.8 seconds, has a top speed of 155mph, but returns 51.4mpg (50.4mpg in long-wheelbase form) and emits 146g/km of CO2 (148g/km as a long-wheelbase model).

The other options at launch will be the S400 Hybrid (a petrol-electric combination) and the V8 petrol S500. Mercedes also plans to launch an S500 plug-in hybrid that can return more than 70mpg, and high-performance AMG variants are likely to follow later in 2014.

In continental Europe the S-Class is also launching with a diesel-electric hybrid, called S300 Bluetec, which combines a 2.1-litre four-cylinder turbodiesel with an electric motor. It's a little slower than the S350, at 7.6 seconds from 0-62mph and a top speed of 149mph, but more efficient average economy is 64.2mpg, with CO2 emissions of just 115g/km. Surprisingly, Mercedes has yet to decide whether to bring this version to the UK.

How much will 2013 Mercedes S-Class cost?
Mercedes hasn't revealed how much the S-Class will cost in the UK, but prices are increasing by around 15% in Germany. If that trend is continued here, prices for the S350 Bluetec should start at around 65,000. The premium of around 4000 for long-wheelbase versions is likely to stay the same.