The current Porsche Cayenne was introduced in 2010 and this its first face-lift.

The revised line-up consists of four conventionally powered models but the biggest news is the introduction of a plug-in hybrid model. This replaces the previous non-plug-in hybrid model and uses technology first seen in Porsche’s Panamera E-Hybrid.

The biggest news is the replacement of the hybrid model with a plug-in hybrid. This has a three-litre V6 petrol engine and an electric motor with a combined power output of 428bhp. The maximum range on pure electric running is 22 miles and the maximum speed is 77mph. Combined fuel economy is a claimed 83mpg and with emissions of 79g/km, it is a tempting company car prospect with a benefit-in-kind tax rate of 11%.

The Cayenne S gets a new V6 biturbo engine that improves fuel economy and emissions over the previous generation’s V8 and reduces the time taken to sprint from 0-60 mph by around half-a-second. Its official economy figure is 29.7mpg.

The standard Diesel model is tweaked for improved emissions and economy, so it'll now do an average of 42.8mpg and emits 179g/km of CO2. The V8 Diesel S is similarly tweaked, with a drop to 209g/km and a slight economy improvement to 35mpg.

How much equipment does it come with?
All Cayenne models now get xenon headlights and LED daytime running lights as standard, with the range-topping Turbo getting dynamic LED headlights. Front and rear parking sensors, cruise control, an automatic tailgate and start / stop technology are standard across the range.

A new design of steering wheel and gearshift paddles are standard on all models, while the rear seats are redesigned for improved comfort. Seat ventilation is now an option.

How good are its rivals?
The main rivals to the Cayenne come are the Range Rover Sport and the BMW X5.

The Range Rover Sport is a What Car? award winner and available with seven-seats, but neither rival is available as a plug-in hybrid so the Cayenne now has a significant advantage in company car terms.

For people who lust after the Porsche badge, the smaller Macan now offers a cheaper route into sporty SUV ownership. 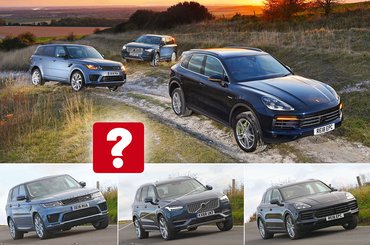 Land Rover, Porsche and Volvo all offer plug-in hybrid luxury SUVs that promise to be cheaper to run than diesel equivalents and just as good to drive. Let’s see which one impresses most