Seismic performance combined with an ability to drive purely on electric power make the Porsche Cayenne Turbo S E-Hybrid unusually versatile, but does it attempt to do too much?...

There are two distinct and very different sides to the new Porsche Cayenne Turbo S E-Hybrid.

On one hand, it’s an astonishingly quick performance SUV with 671bhp; a figure that not long ago was only available in the wildest supercars. Even today’s 911 Turbo S falls short of that output, though that car does out-accelerate its considerably larger sibling on account of the fact that it weighs considerably less – roughly the weight of the original Lotus Elise. The Cayenne’s 0-62mph time of 3.8sec is nevertheless riotous, as is the 183mph top speed.

The other side of the coin is this: 19 miles of pure-electric driving range provided by a battery pack and small electric motor give this £123,000 Cayenne unusually low CO2 emissions, and an official fuel economy figure that gets close to 60mpg, which is exceptionally good given the performance on offer. Thus, despite its colossal weight and over-the-top performance potential, the Cayenne Turbo S E-Hybrid is actually one of the most environmentally ‘friendly’ cars Porsche makes – at least on paper.

Of course, what Porsche would like you to believe is that the Cayenne Turbo S E-Hybrid fulfils the roles of both hot-rod family car and fuel-sipping hybrid beautifully, but is that really the case? 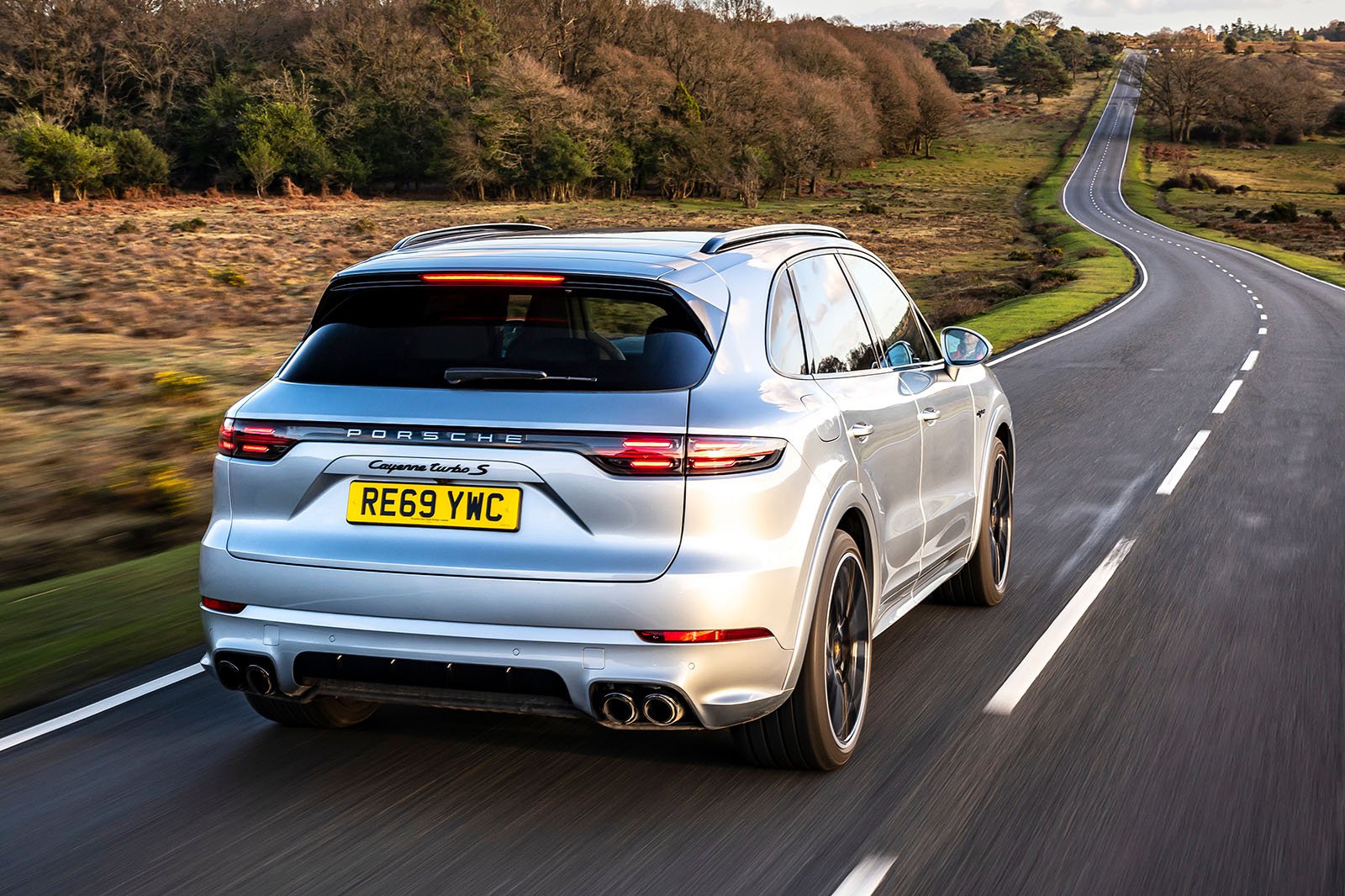 At 2490kg this is an unusually heavy car, and beyond its large size, that weight is accounted for by the battery pack, the big twin-turbocharged 4.0-litre V8 engine and all the tech that's needed to make a two-and-a-half-tonne SUV handle well. This includes four-wheel steering to boost agility at low speeds and active anti-roll bars that reduce body lean in bends.

Such huge weight means the air suspension fitted as standard to the Cayenne Turbo S E-Hybrid has plenty to think about on poorly-surfaced British roads, but for the most part the car’s body control is excellent and it never becomes unruly over undulations. Porsche has stiffened the suspension compared with the regular Cayenne Turbo to achieve this, and the ride proves noticeably firmer as a result. At least the Turbo S E-Hybrid’s precise, well weighted steering feels much the same as the regular model’s, no bad thing as it’s amongst the best in its class.

Despite the complexity of the hybrid system, which combines the petrol V8 with an eight-speed automatic gearbox and electric motor, the driving experience is also never anything less than refined and responsive. The Cayenne Turbo S E-Hybrid has a range of driver modes that vary the response and nature of the power delivery, or can keep the car running on electricity until the battery is drained if you like, but the default Hybrid setting is a nice compromise. Starting in all-electric mode, the car’s brain then feeds in or shuts off engine power as required, and the transitions between petrol and electric power are seamless and usually well-timed. Alternatively, when it’s engine and motor are fully engaged in Sport Plus mode, the Cayenne Turbo S E-Hybrid is pulverisingly quick, seemingly from anywhere in the rev-range, so you can overtake on a whim.

Fuel economy will depend on the length of your journey and the style of your driving. If you run predominantly on electricity and are gentle, you might well see 60mpg. However, on longer journeys where you’re mainly using the petrol engine, don’t expect more than an uninspiring 28mpg on the motorway, and you’ll manage only half that if you go for a cross-country blast. City-dwellers might be able to make the best of the electric range, but for most owners the Cayenne Turbo S E-Hybrid will drink fuel like any other big, powerful SUV. So, to answer the opening question, there are obvious limits to this car’s duality. 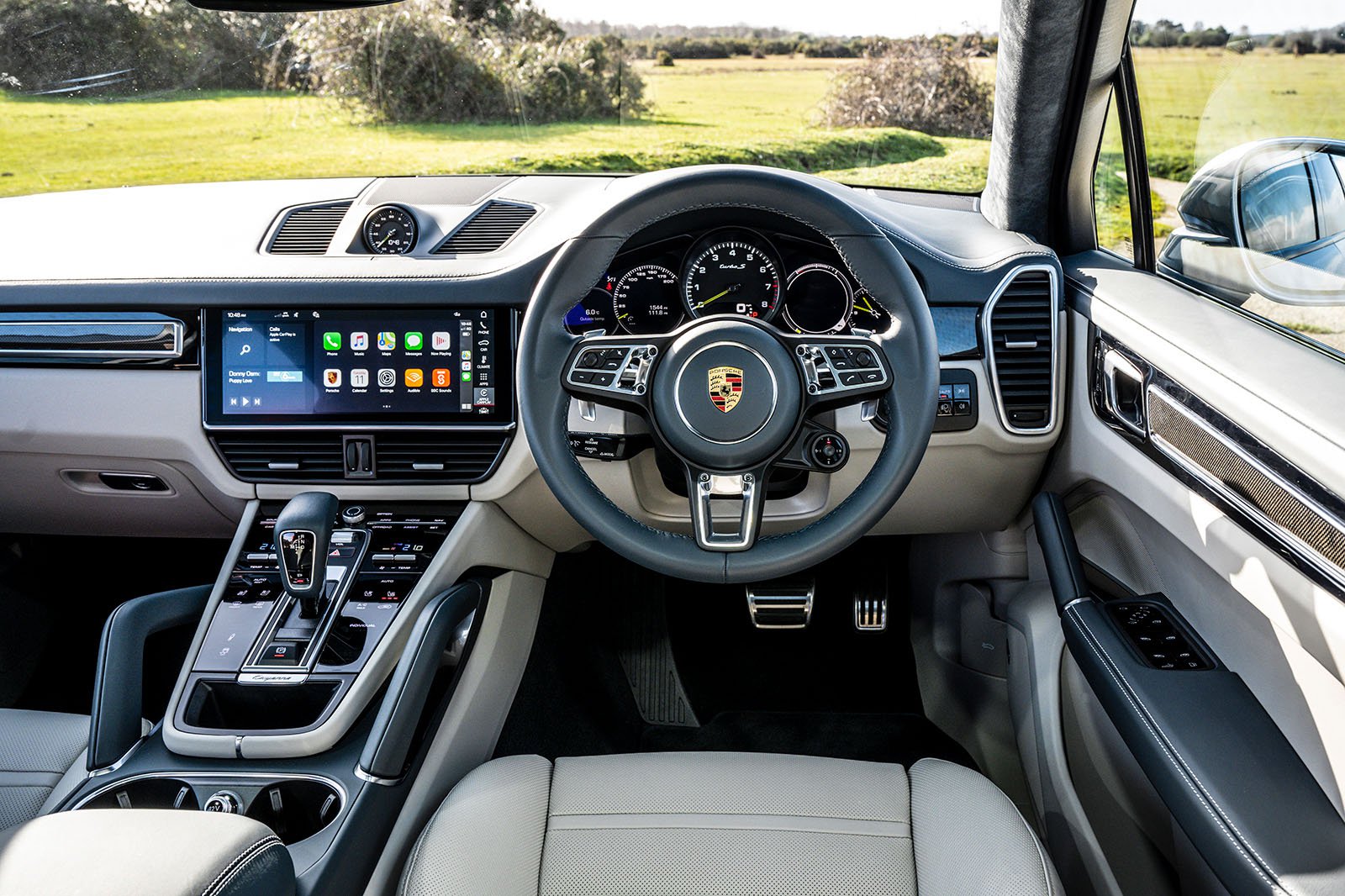 The Turbo S E-Hybrid’s interior is typical of Porsche, with an excellent driving position and an ambience that’s perhaps best described as ‘functional luxury’. It isn’t quite as opulent as the highest-ranking Range Rover models or the Bentley Bentayga, but it’s hard to complain about the fit and finish or available gadgetry.

Overall, the most powerful Cayenne touts all the strengths of the regular model, albeit with an extremely high level of standard equipment. It only loses out in terms of boot space. With its large battery pack positioned beneath the boot floor, luggage capacity falls from 772 to 645 litres, and there is no underfloor compartment in which to store the sizeable charging cable.

For more on the Cayenne’s practicality, infotainment system and to read about the other engines in the range, have a look at our main Porsche Cayenne review.