Low-slung Hyundai Ioniq 5 is the first model to come from the Korean brand's new electric car sub-brand, and has a range of up to 310 miles...

While some cars might be described as beautiful, very few will change styling conventions within their class. You expect an SUV to be big and tall, for example, or a sports car to be low-slung and sleek. We doubt many people would have imagined the upcoming Hyundai Ioniq 5 looking the way it does, however; it harks back to the 45 concept car of 2019, which seemed to have come straight out of the 22nd century and .

This is the first car to come from Hyundai’s family of Ioniq models. While today’s Hyunda Ioniq is a family car which can be had in hybrid, plug-in hybrid and fully electric forms, the Ioniq name will shortly become an umbrella term for Hyundai’s electric cars.

Half SUV, half family hatchback, the Ioniq 5 is between the current Tucson and larger Santa Fe in terms of length, but it sits lower to the ground than the former model. The result is a low-slung SUV that features slim LED headlights, a bonnet which overlaps its front and flush door handles that pop out when you approach the car. 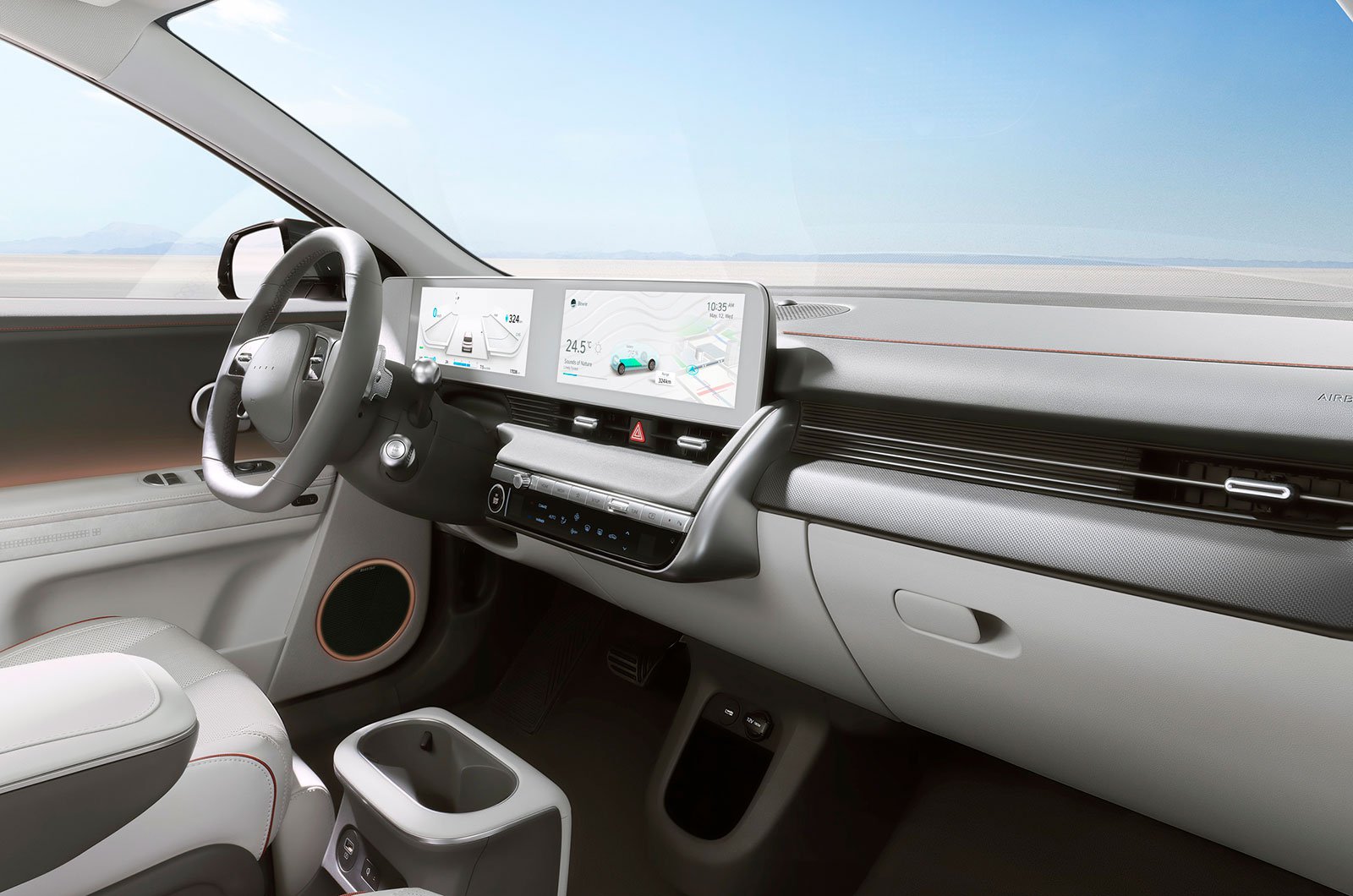 Inside, the Ioniq 5 looks just as futuristic as its exterior, with a dashboard dominated by two 12in screens, one for the digital driver's display and one for infotainment. There’s also a large augmented reality display that can project information including directions from the sat-nav onto the windscreen to make navigating around busy city streets easier. Android Auto and Apple CarPlay smartphone mirroring is standard, while wireless phone charging and an upgraded Bose stereo system are likely to be on the options list.

The car’s centre console can be moved forwards and back to suit drivers of different shapes and sizes, while many of the materials used inside the Ioniq 5 are from eco-friendly sources, including recycled plastic bottles and natural wool.

The Ioniq 5 is the first Hyundai to sit on a new platform that that was designed with electric cars in mind. That means the Korean car maker has been able to maximise room inside the 5, and indeed a six-footer can sit behind a driver of equal height with room to spare. There’s also a larger boot than you’ll find in the rival Kia e-Niro, at 531 litres, plus up to 57 litres more – enough for a soft overnight bag – under the bonnet. The Ioniq 5’s second row of seats can split and fold in a 60:40 configuration, should you need to extend the boot further. 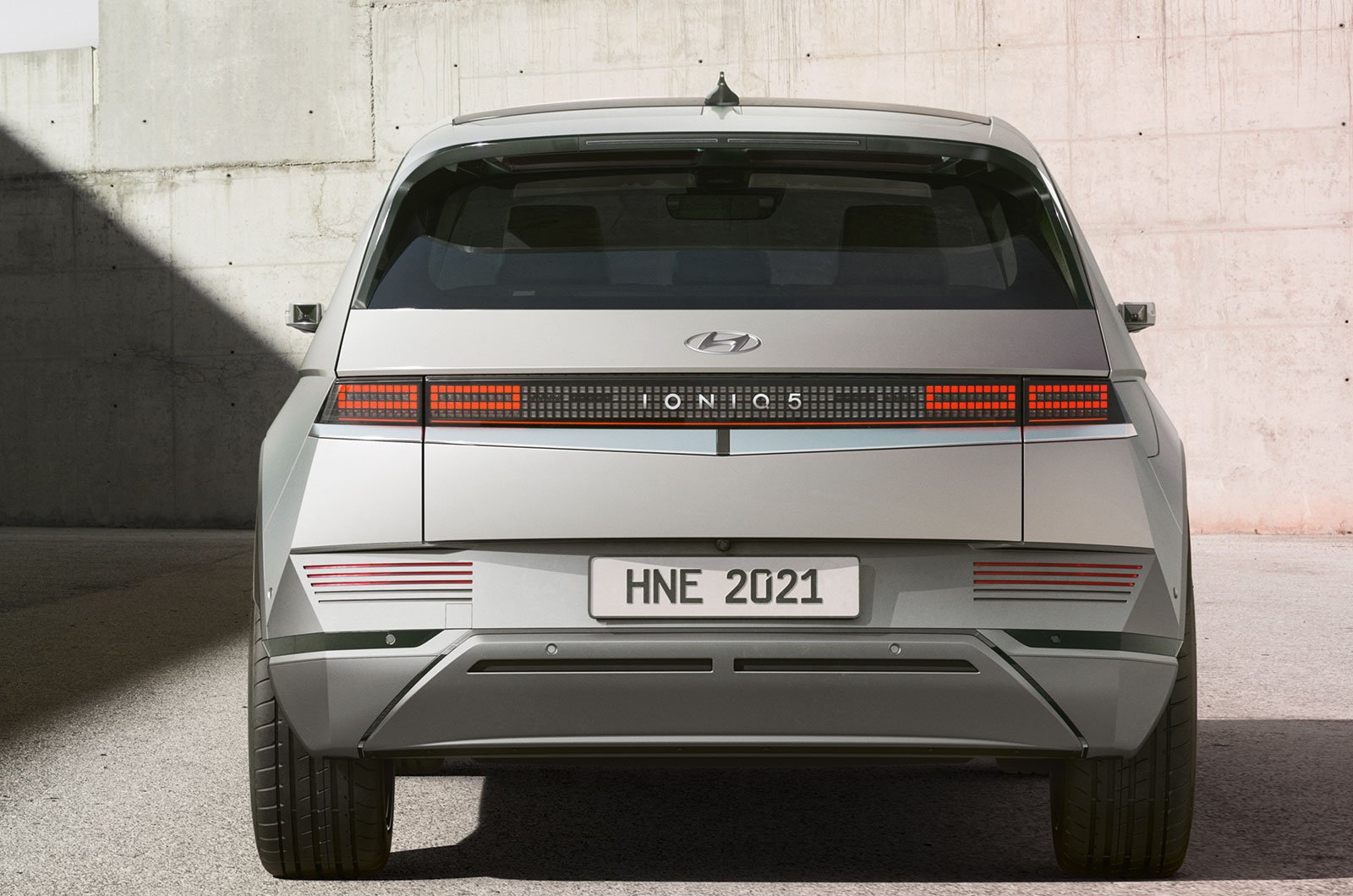 As is becoming the norm among electric cars, drivers will be able to choose different configurations of the Ioniq 5 to prioritise either range or performance.

In its most basic form, power is stored in a 58kWh battery pack and delivered to the rear wheels via a single 168bhp motor, giving the car a range of around 248 miles – far more than entry level versions of Hyundai's other electric SUV, the smaller Kona Electric, can manage, and farther than even the most expensive version of the Nissan Leaf hatchback can take you. A more powerful version of the Ioniq 5 with dual electric motors for a total of 232bhp, is also available.

Upgrading to the larger 72.6kWh battery pack and single 215bhp electric motor and sticking with rear-wheel drive increases the 5’s range to 310 miles. Or you can again opt for four-wheel drive, with which dual motors that combine to produce up to 302bhp – a combination that will crack the 0-62mph sprint in just 5.2sec and take you 298 miles between charges. All Ioniq 5s are limited to a top speed of 115mph. While the Ioniq 5 will be competitive in range and performance terms, then, it’s important to note that some rival electric SUVs, including the larger Ford Mustang Mach E and Volkswagen ID.4, can travel even farther.

In a market first, buyers will be able to order their Ioniq 5 with solar panels built into its roof, which can charge the car on the move. Hyundai engineers suggest that, in sunny countries such as Southern Spain or Italy, it is possible to generate extra range of more than 1200 miles over the course of a year. In the UK, however, that figure is likely to be far less.

The Ioniq 5 is also capable of acting as a power source for exterior equipment, such as power tools, or even being used to recharge other electric cars. 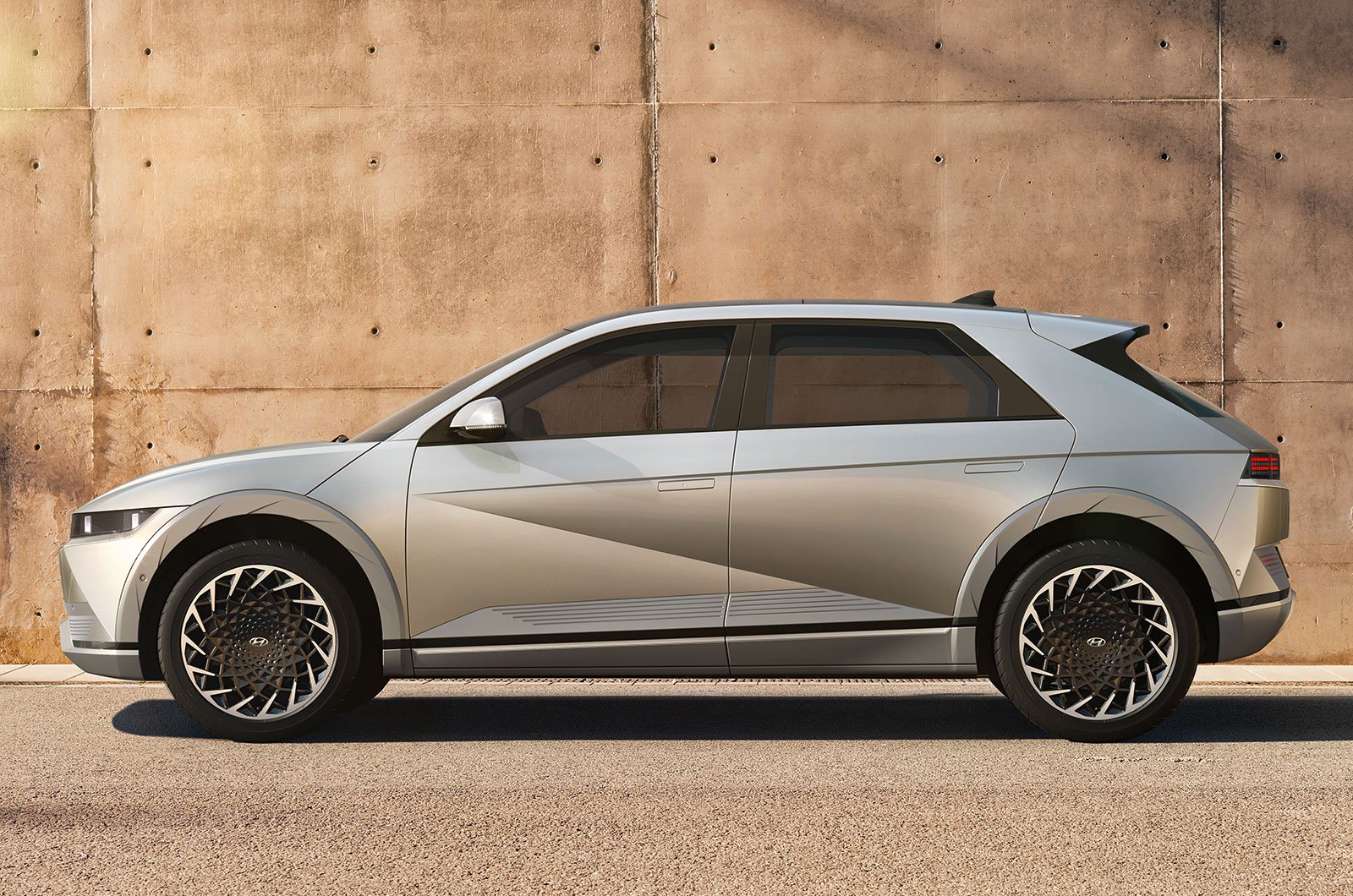 The Ioniq 5 supports charging of up to 220kWh, and – using the fastest chargers – can be charged from 10-80% of capacity in just 18 minutes. Recharging the car using a standard public charger or wallbox unit will take significantly longer. Hyundai is also offering Ioniq 5 customers access to the Europe-wide Ionity fast-charging network as part of their purchase.

Available safety and assistance kit includes a semi-autonomous system that enables the Ioniq 5 to control its own steering, acceleration, braking and lane-changes on the motorway. There's also a blind spot monitoring system, driver attention monitor, lane-keeping assistance and automatic emergency braking that can recognise pedestrians and cyclists. 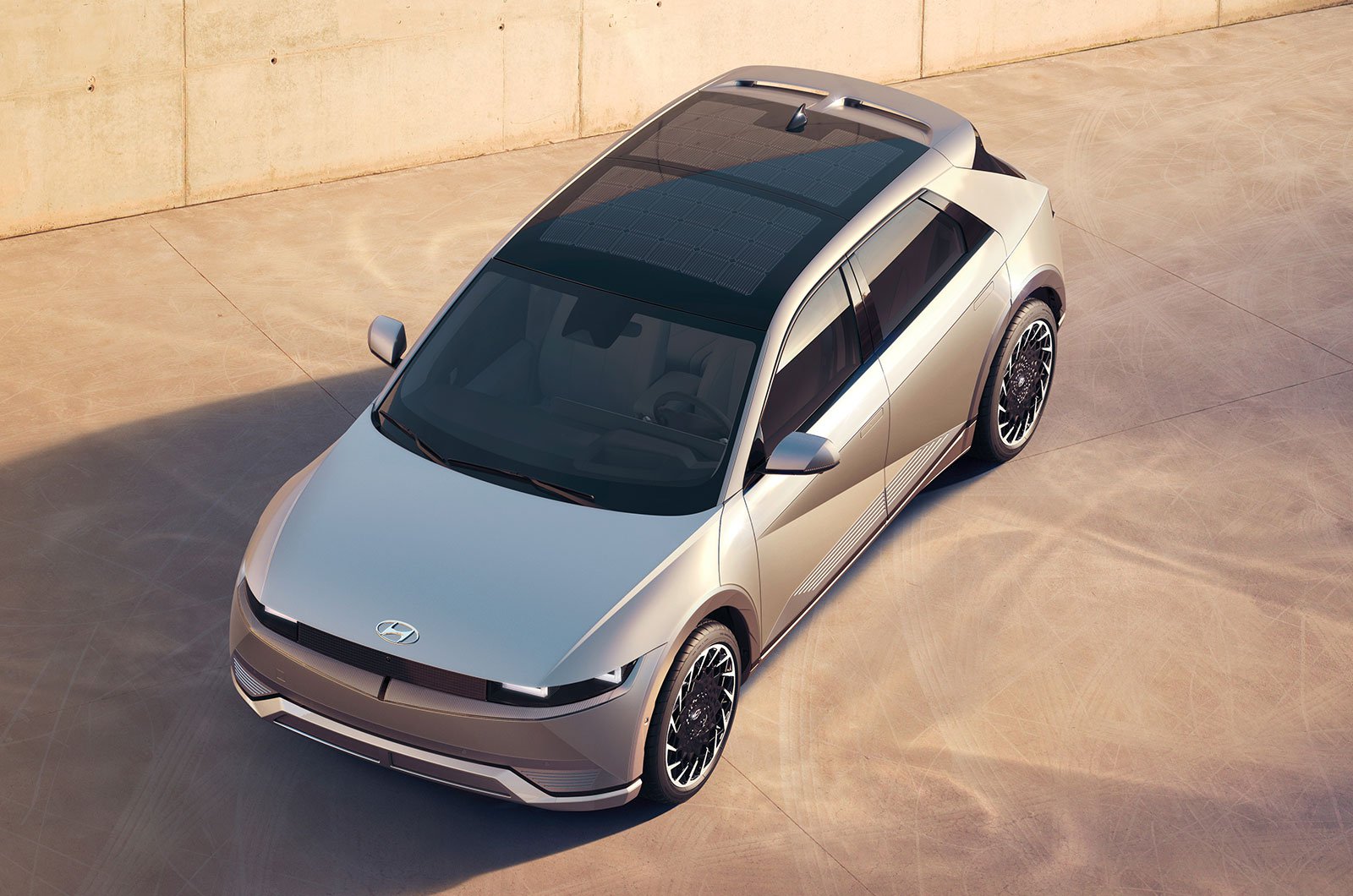 Pricing has only so far been announced for the high-spec "Project 45" model that will crown the range at launch. This will cost from £48,000 without the government's £3000 grant taken into account. While lower-end versions of the Ioniq 5 are expected to arrive soon after launch and cost less, Hyundai's latest electric car will still be substantially more expensive than the rival Kia e-Niro, and also more expensive than smaller premium electric SUVs, such as the upcoming Mercedes EQA.