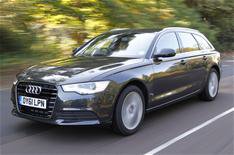 What is it? It's a Multitronic automatic version of Audi's biggest estate, the A6 Avant. We've tested the gearbox with the front-wheel drive 3.0-litre diesel engine, but it's also available with the 2.0-litre diesel.

The Multitronic auto is a continuously variable transmission (CVT), whereas the A6 Avant's main rivals the BMW 5 Series Touring and Mercedes E-Class Estate are offered with conventional autos.

What's it like to drive? In CVTs of old, a prod of the accelerator pedal used to send the revs soaring, and they'd stay there, droning away, until you were up to speed. Not so with the Multitronic hooked up to this 3.0-litre diesel.

Around town it barely exceeded 1500rpm, and it was only a few hundred higher on the motorway the Multitronic simply makes the most of the engine's 295lb ft of torque. Put your foot to the floor and the gearbox behaves much like a normal auto; artificial 'steps' simulate kick down, and there's a pleasing, meaty exhaust grumble.

It's only when coasting to a stop that the Multitronic behaves in an unexpected way. At about 10mph, the free-wheeling comes to an end and the car suddenly slows, as if you'd driven into standing water. In stop-start traffic this can be a bit of a pain.

The rest of the driving experience is the same as a manual A6 Avant. It's not completely satisfying because there's a bit too much delay between a steering input and the body settling down (in SE cars, such as the one we drove). Otherwise, though, it's a pretty relaxing car to drive.

What's it like inside? The A6 Avant's cabin is a delight to spend time in. There's generous head- and legroom for four, plus it's beautifully finished, and all the switchgear operates with slick precision.

The boot is well shaped and there are lots of practical touches, including straps, lashing points and an optional hands-free opening system that raises the tailgate when you wave a foot beneath the rear bumper.

While carrying capacity is slightly up on the previous A6 Avant's and the 5 Series Touring's, it's still well behind the E-Class Estate's whether the rear seats are up or down.

Most systems are controlled by selecting from on-screen menus using a central dial and a small collection of buttons a process that's pretty simple once you get the hang of it.

However, the space around the accelerator is quite tight, so big-footed drivers beware.

Should I buy one? Any executive car lives and dies on how it stacks up as a company car proposition, and there's almost nothing between the A6 Avant Multitronic and the similarly powerful BMW 525d auto and Mercedes E250 CDI auto. All three attract a 20% company car tax rating and their economy and emissions figures are almost identical (54.3mpg and 136g/km in the case of the A6).

This A6 Multitronic is definitely worth considering if you're in the market for a big, auto premium estate. The CVT gearbox works well, and while the BMW and Mercedes make do with high-powered four-cylinder engines, the Audi uses a more cultured V6.