What is it? The Avant is the estate version of the latest Audi A6, and comes with the same choice of engines, gearboxes and two- or four-wheel drive as the saloon, as well as all the same technology, much of which is inherited from the A8 luxury car.

It's virtually the same size as the outgoing model, but by extending the wheelbase, Audi says it has given the new car more room inside, as well as a slightly larger boot.

What's it like to drive? The Avant's real strength is on motorways, where it will fly along for mile after mile. It sits solidly on the road and imparts a real sense of calm on its driver and passengers.

Around town, the Avant is easy to manoeuvre, and across country it's pleasant to drive if not exciting. It grips well and SE models ride reasonably well, although British roads may pose a tougher test than the Germans ones we sampled.

However, the German roads still showed that the S line models' lowered suspension may well prove too firm for some people even though these versions handle and turn into corners more sharply.

Mind you, as long as you don't hurl the car around too much, SE cars handle well enough, if not as sharply as a BMW 5 Series.

The Avant grips well and feels assured, unless you tackle a succession of bends too fast, when the body can sway too much from side to side.

Even the least-powerful engine the four-cylinder 2.0-litre diesel gives the car a decent turn of speed. Its only weakness is a relative shortage of refinement.

Going for one of the larger engines markedly improves matters in that respect but, rather than simply being impressed by their extra pace, what strikes you is how increasingly effortless it is to get that performance.

The 3.0-litre TDI diesel units are appreciably stronger than the 2.0-litre ones, while the twin-turbo engine (due at the end of this year) gives the Avant serious performance, getting it to 60mph in just 5.4 seconds.

The 3.0-litre petrol engine also gives strong performance, but it needs to be worked harder than the diesels, and the buying and owning costs will put off all but the most ardent petrol-lovers.

What's it like inside? Audi is renowned for its quality, and the A6 Avant doesn't disappoint. Its build and materials could shame some luxury cars.

Generally, it's good news for practicality, too. The driver and front-seat passenger have huge amounts of space, and pretty much any driver can get comfortable. Rear-seat passengers also have masses of head- and legroom, and will appreciate how easy it is to get in and out.

It's only in the boot where the car's rakish lines have some effect. Although this new model has more space than its predecessor, it's dwarfed by the Mercedes E-Class. Plus, the rear seats don't fold down completely flat.

On the other hand, at least the boot is a nice square shape, with no awkward load lip. What's more, plenty of neat details such as straps, hooks and a rail-mounted luggage-fixing system are standard across the range.

Should I buy one? If you're looking for a premium estate to carry large loads, then go for a Mercedes E-Class Estate.

However, if space isn't the be-all and end-all, then the Audi has plenty in its favour: a huge cabin, plenty of standard equipment and attractive prices.

We wish it was a little more exciting to drive, but even as it is, it's a fine package. 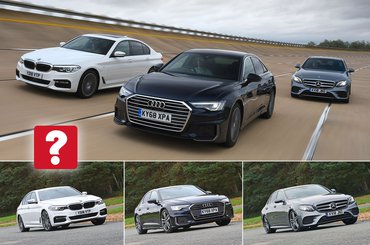