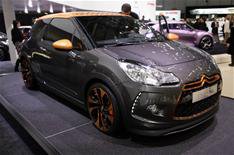 Citroen's stars of its Geneva stand are the DS High Rider Concept and DS3 Racing.

What are they?
The two stars of Citroen's Geneva stand dont actually have Citroen badges. Instead, both the cars come from its new DS brand.

Citroen High Rider concept car
According to the company, the High Rider is a beefy take on traditional low-slung coupes: compact, muscular and perched on 19-inch alloys. Its flowing windscreen stretches back over the driver's and front passengers heads, creating an airy feel in the cabin. At the same time, the separate side windows blend together to look as if they are one single piece of glass above the high waistline.

The car on the stand has a three-door body, but the production version won't be in that form. However, if you imagine the DS High Rider with five doors, then you might have an image of the DS4, Citroen's DS take on the next C4 hatch, which is expected to be unveiled at the Paris motor show in September.

Citroen Racing, the team behind the companys recent rally world championships, has developed the car from the recently launched DS3 supermini, and will produce 1000 examples. The majority are expected to come to the UK, with prices starting at about 18,500 when it goes on sale in the autumn.

More photos of the Citroen DS3 Racing
> Image 1: click for a larger view
> Image 2: click for a larger view
Thanks to its 197bhp turbocharged 1.6-litre petrol engine, its expected to hit 60mph in less than seven seconds. The car has also been lowered by 15mm and has uprated brakes, as well as stiffer springs, new shock absorbers, a wider rear track and retuned steering to give it better handling.

Last but not least, to make it even more distinctive than the standard DS3, the Racing has new body trim, chrome detailing, chequered flag decals and bright orange finishes.