Citroen's new Berlingo for the summer 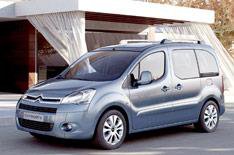 The second-generation of Citroen's Berlingo Multispace MPV goes on sale this summer.

Other details are scant, but the official picture shows a car which is more rounded and modern looking than today's boxy model.

Expect a mixture of petrol and diesel power, with diesel models likely to be the best sellers.