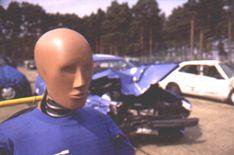 Instead of awarding three separate star ratings for adult and child protection, alongside pedestrian impact, Euro NCAP is now issuing a single rating out of five stars.

The three key test areas are still marked, but they are rated with a percentage score. There is also a new category, called Safety Assist, which takes into account any safety systems fitted to vehicles. The scores are all totalled up to give the final star rating.

The marking system is also tougher, and stability control must be fitted as standard on 85% of a car's range if it is to be awarded full marks. The tests also take into account the presence of a speed limiter.