More for you |
New Volkswagen Golf vs used Volkswagen Golf: which is best?How can I sell my car safely during the coronavirus pandemic? Skoda Superb Estate iV plug-in hybrid long-term test reviewNew issue of What Car? magazine on sale nowMost efficient hybrid cars you can buy
Home
News
June 2012
news 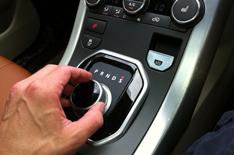 I borrowed the Evoque to drive to and from the Goodwood Moving Motor Show this week.

On the stop-start three-hour+ drive back (a distance of around 60 miles) I was glad that we opted for the automatic gearbox because it meant not having to lift on and off the clutch pedal every few seconds. The Evoque was reasonably entertaining, too, when there were chances to get some speed up on flowing Surrey and Sussex roads.

Outright performance from the 2.2-litre diesel is strong, but I found the initial acceleration rather sluggish from standstill. This was particularly noticeable when trying to pull swiftly out of junctions and grab a gap in traffic, so I soon resorted to selecting the auto box's Sport mode, which adds useful extra urgency.

Thanks to its high-up driving position you get a great view of the road ahead in the Evoque, but I'm not convinced the same can be said for the view out the back.

For me, it's the left-side rear pillar, that looks quite large compared with the rear screen and side windows, that's the problem. For example moving from lane two to lane one on a motorway I find myself checking three or four times before making the manouevre just in case there's a car in the blind spot.

I don't find it an issue moving in the other direction from lane one to lane two.

Time for a bit of a confession: I haven't been in the Evoque much over the past few days. Instead it's been in the hands of our chief photographer John Bradshaw, who's been without a long-termer since our Seat Alhambra went back a month or two ago (he's been holding his breath for an Audi Q3 since, and is starting to go purple).

Anyway, John's feedback on the baby Rangie has been broadly positive, but he's in no doubt of its status as a 'lifestyle vehicle' more than a 'practical family car'. Throw any more than two adults and a small amount of luggage at the Evoque, it seems, and the cabin starts to feel, well, pretty full more so than you'd find in a Freelander, for sure. The panoramic glass roof has been a hugely popular option because it brightens up what would have been a very dull rear cabin, but it can't create any more space in there.