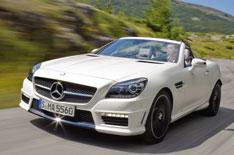 What is it? Given the recent advances in engine technology, its not surprising that this new AMG version of Mercedes' compact drop-head is the most powerful SLK of all time. Just as intriguing, though, is the fact that it's also the cleverest.

Whats it like to drive? The headlines include a naturally aspirated 5.5-litre V8 engine that's tuned to produce 416bhp and 398lb ft of torque, and capable of hurling the SLK from 0-60mph in just 4.6 seconds.

It delivers a relentless shove of acceleration and an increasingly intense exhaust note as you barrel up the road.

Perhaps even more startling, though, is the fact that it will also return 33.6mpg. To put that in perspective, it's a 30% improvement on the outgoing car.

Some of this gain is down to the fitment of a stop-start system and subtle efficiency tweaks, but its mainly thanks to cylinder shut-off technology. Under light engine loads between 800rpm and 3600 four of the eight cylinders can be switched off, dramatically reducing fuel consumption.

We havent been overly impressed with the latest SLKs handling, which is all a bit on the stodgy side, but this AMG version shows what can be achieved with a little tinkering.

AMG sports suspension, beefier stabiliser bars, a bespoke steering rack and a system that employs the rear brakes to force the nose of the car to turn in aggressively all have a positive influence on the car's agility. Together, these mods also provide much higher levels of driver feedback.

The AMG still wouldnt challenge a Porsche Boxster on a twisty back road, but the handling is miles better compared with the standard SLK's.

The penalty for this added agility is a rather unforgiving ride. Although things improve steadily as speeds rise, the ride feels very crunchy around town.

To be fair, our car came fitted with the optional handling package, which brings even stiffer springs, so we look forward to testing the standard set-up in the near future.

When the roof is down, theres a little more body flex when you hit bumps, but the difference between driving with the roof up and down isnt as stark as you might imagine.

Whats it like inside? The SLKs party piece remains its folding roof-routine a spectacle that still draws admiring glances.

It also gives onlookers an unrestricted view of the car's finely appointed cabin. Highlights include figure-hugging AMG sports seats and a sports steering wheel that is flattened top and bottom and has aluminium gearshift paddles.

One of the best features is the Airscarf system, which blows a steady stream of warm air onto the back of your neck through a slot just beneath the head restraint. Combined with a standard air diffuser to prevent wind bluster, it makes winter roof-down motoring perfectly feasible.

Should I buy one? At the sharp end of 60K, the AMG is a very expensive SLK, but it's also the best model in the range, and one of a limited number of open-top cars still to feature a V8 engine. For many, the sounds this makes will be all the excuse they need to sign on the dotted line.

Bear in mind, though, that despite its sheer speed and the improvement in handling, the AMG is still more of a rapid sports tourer than a truly engaging sports car.