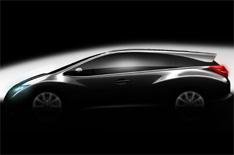 A Honda Civic Wagon will be unveiled next year, possibly at the Geneva motor show.

Honda's European president, Manabu Nishimae, said that a Honda Civic Wagon concept car will be shown next year. What Car? understands this could be as early as the Geneva motor show in March.

Rival car maker Toyota revealed an Auris Touring Sports an estate version of the Auris at the Paris motor show last week. The Auris Touring Sports will go on sale next year and will, says Toyota, be the world's first hybrid estate car. It's unlikely that Honda will offer a hybrid system in the Civic Wagon.

The car will be built at Honda's factory in Swindon and it is expected to go on sale in 2014. Honda released a teaser image of the concept car (below).

A teaser image of the Honda Civic Wagon concept car

A new hot Civic Type R will go on sale in 2015, but a hot estate version to rival the likes of a Ford Focus ST Estate is not expected.