With the sun shining, you might be tempted by a drop-top such as the Mazda MX-5 RF or Mini Convertible. Which one deserves the warmer reception?... 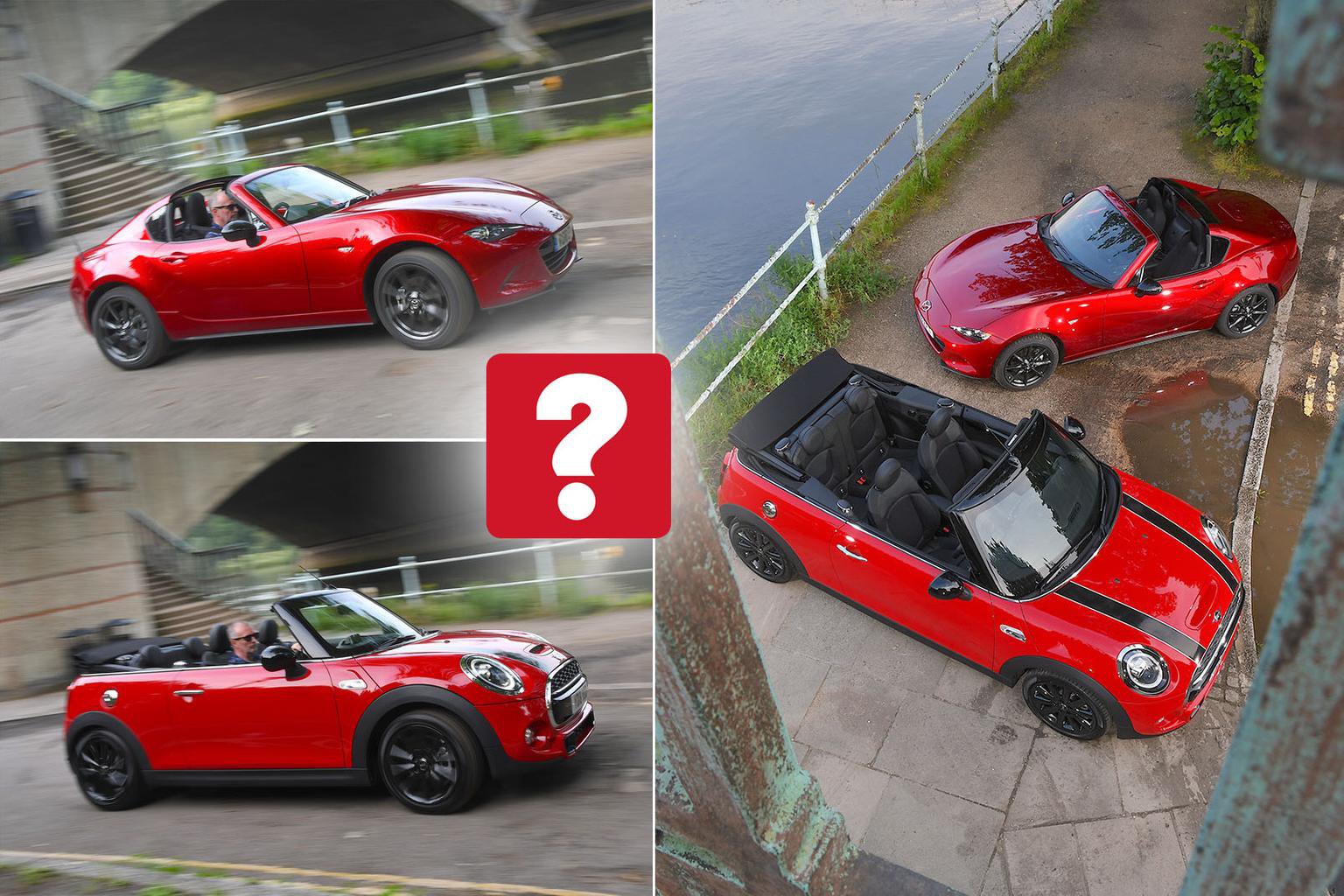 The same rear-wheel-drive sports car format as the regular MX-5, but with a retractable hard-top.

Sporty Cooper S aims to offer open-air fun like the MX-5, but with the ability to seat four.

You’ve got to love this time of year. With slimy road surfaces and icy windscreens long forgotten, it’s time to don a baseball cap and slap on some factor 50. So, what better time to test Mazda’s MX-5 RF, the folding hard-top version of its legendary two-seat roadster?

The buttresses either side of its rear window differentiate its looks, and switching from canvas to a metal roof has added only a few kilograms to the car’s weight. That should maintain those MX-5 virtues of entertaining handling and fizzy performance, especially from this 158bhp 2.0-litre version.

So, what else delivers alfresco delights with similar get-up-and-go and for similar cash? Well, how about the Mini Convertible in sporty Cooper S guise? As part of a light refresh, it now comes with tweaked styling that includes Union Flag tail-lights, as well as more colours and customisation options. It isn’t an out-and-out sports car like the MX-5, but it makes more power (189bhp) from its 2.0-litre turbo engine and has two extra seats. 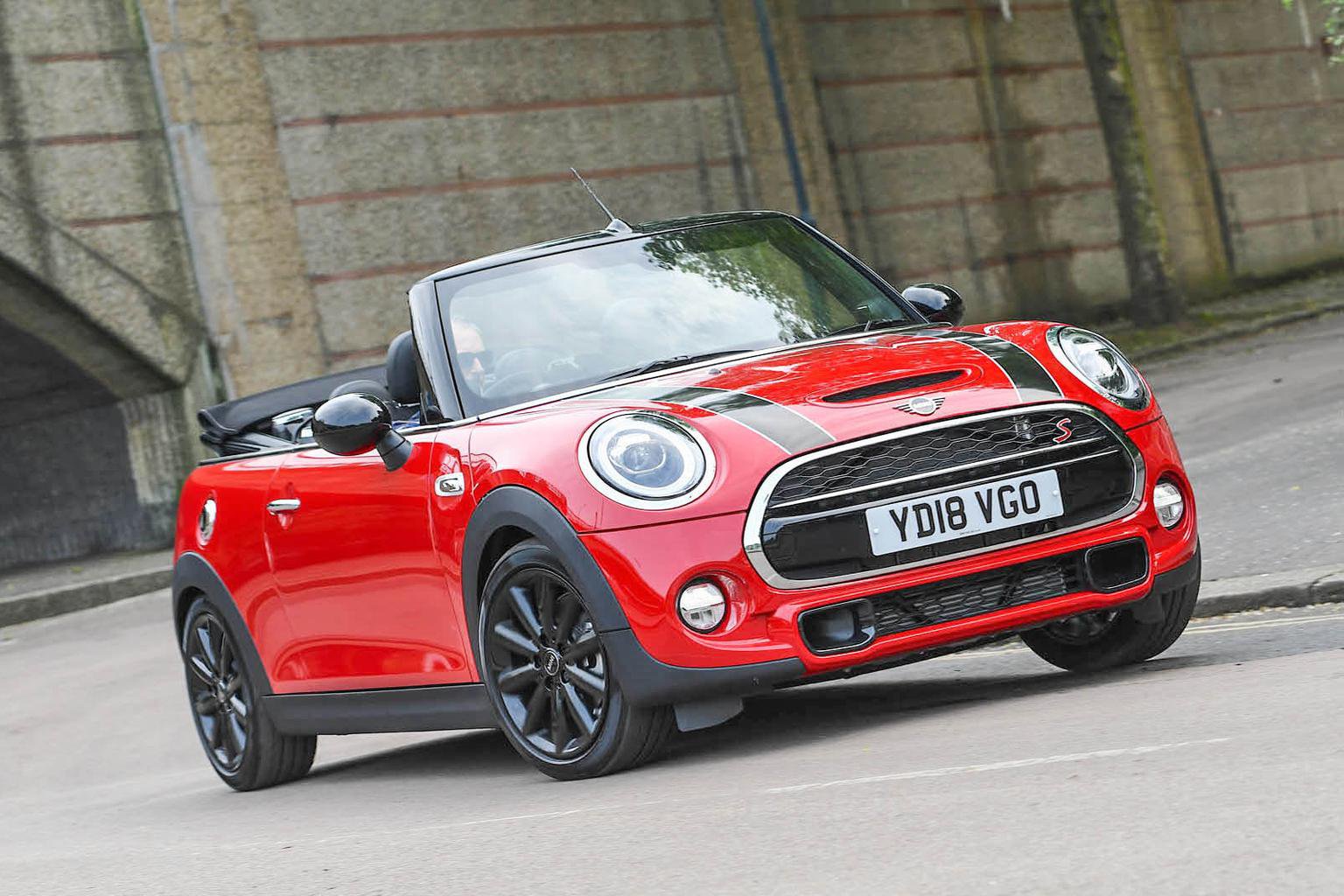 The Mini takes the spoils (just) for flat-out acceleration, and it has bags more oomph at low revs. Therefore, you can be lazy with gearshifts and still make brisk progress – no bad thing, because its vague six-speed manual gearbox is hardly joyous to use. The Mini’s engine is smoother, though, and you’ll enjoy some fruity parps from the exhaust if you select Sport driving mode.

The MX-5 is just the opposite. Being naturally aspirated, its engine delivers peak power and torque at higher revs, so while it’s zippy, you have to work it harder and make more gearchanges in order to keep up with fast traffic. But who cares when its stubby shifter is so delightful to use? Giving the MX-5 the beans simply adds to its appeal. It’s noisier when you do, though.

You can tell the MX-5 was designed as a convertible from the outset by how much stiffer it is; you have to look very closely to notice familiar open-top symptoms such as a trembling rear-view mirror. In the Mini, you can’t ignore the tremors through its body, or the accompanying squeaks and rattles.

That’s a shame, because the Mini generates much less wind and road noise than the MX-5 when their roofs are up. Both are relatively bluster-free with their roofs down – provided the Mini has been fitted with the optional £235 wind deflector. But again the Mini is quieter; the drone of wind noise in the MX-5 can become quite wearing.

If you don’t want full exposure, the Mini’s roof also retracts like a sunroof, as well as opening or closing fully at up to 19mph. The MX-5’s roof can be operated at up to 6mph, but that’s so slow that you might as well pull over first.

You might expect the ‘proper’ sports car to ride like a rickshaw, but the MX-5 is actually remarkably supple, at both low and high speeds. This softness leads to plenty of lean in corners, but the MX-5 still flows along winding B-roads with precision and poise, despite the fact that there isn’t much weight build-up in the steering as you wind on lock. The fact that it’s rear-wheel drive means you have more scope for adjusting the MX-5’s cornering stance with the accelerator, too.

The Mini is much firmer, thumping over sharp intrusions at low speeds and becoming wearingly agitated over uneven motorway surfaces. It also leans a lot in corners, but it feels far less composed. Its steering is relatively slow to react around the straight-ahead and then frantically quick as you wind on lock, so the Mini isn’t as easy to drive smoothly.